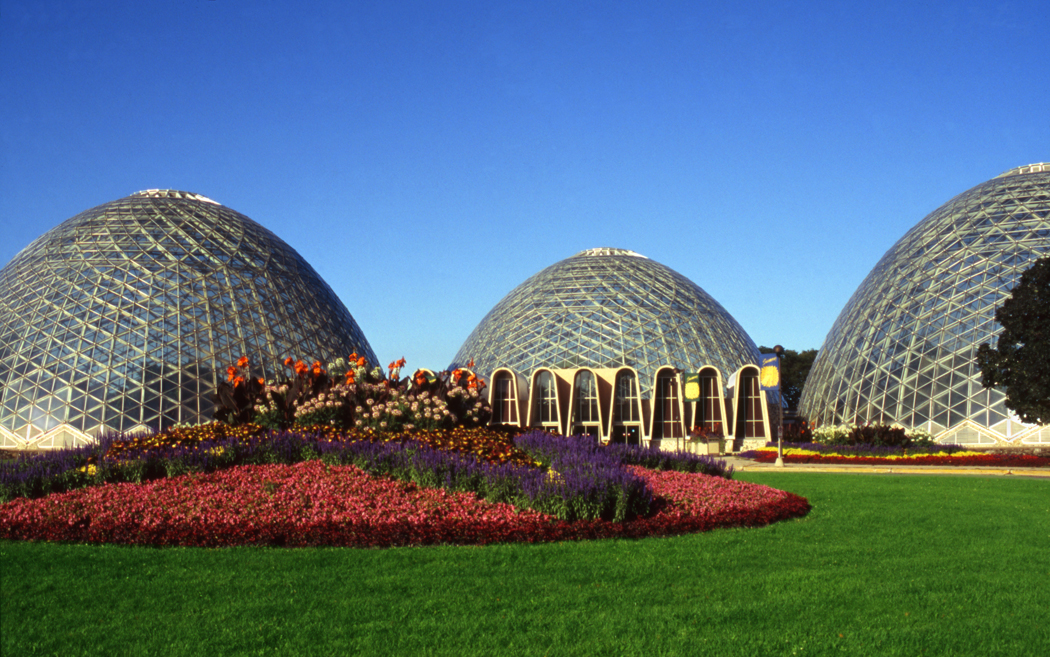 From the beginning, the contradiction at the heart of the effort to save Mitchell Park Domes has been that Milwaukee County policy makers have resolutely supported a policy to restore and preserve the domes as they currently exist, but wouldn’t commit to funding such a project.

It was this contradiction that led the county to create a public task force to study options for pursuing the domes, spend well over $1 million on emergency repairs and planning, and still have nothing to show for it in the way of an actionable plan to save the domes. The push for preservation was set in motion after small concrete chips began falling out of the structures in 2013, leading the county to install an emergency mesh to catch the falling debris.

In 2019, the final consultant, Montana-based ArtsMarket LLC, put together an ambitious $66 million plan to repair the domes and also develop Mitchell Park into a destination with new amenities that would generate much needed revenue for the county and its Parks Department. Attendance at the domes, which generates 80% of their revenue, has been declining since the 1970’s, making business as usual unsustainable for their future operation.

The ArtsMarket plan was endorsed by the task force and eventually adopted by the Milwaukee County Board. But on Tuesday, supervisors heard a financial analysis of the plan conducted by Jolena Presti, managing director of the accounting firm Baker Tilly, and Rebecca Mitich, managing partner at the law firm Husch Blackwell.

Their analysis was that the plan was not feasible. The plan involved the creation of a number of legal entities that would pursue a stack of complicated financing sources including Historic Preservation Tax Credits, New Market Tax Credits, PACE financing and Opportunity Zone Tax Credits.

These complicated financing sources are difficult to secure on their own, let alone in a stack, especially because securing some would preclude the county from going after others, given the legal entities needed to apply for them.

Some supervisors on the Parks, Energy and Environment Committee expressed exasperation at this result.

Said Supervisor Steve Taylor: “We’ve been going at this for nine years, besides putting up some meshing in the domes, I feel like we’ve gone nowhere.”

Sup. Sheldon Wasserman reserved most of his ire for the consultants at ArtsMarket, who were paid $350,000 for their work, calling their plan “scathingly wrong” and saying they “ripped off” the county. Wasserman charged that ArtsMarket pulled one over on preservation advocates and “took their naivete and screwed ’em over.”

In 2019, Wasserman said it was a “waste of money” to fund a review of the ArtsMarket plan, saying the board didn’t need a review to tell them the plan wasn’t feasible and called it “an embarrassment.” Wasserman maintained then that tax revenues would need to be raised to pay for the domes. “And I think the citizens of Milwaukee should make a decision. They want the domes, pay for it.”

Asked Tuesday for her candid thoughts on the ArtsMarket report, Mitich said the plan put vision before financing. “I think how that was to be paid for was somewhat of an afterthought.”

In fact, it was. When the principals of ArtsMarket, Louise Stevens and her husband John Stevens, first presented to the domes task force in May 2019, they set the table for the process by imploring the task force to “Begin with the end in mind.”

The plan was built backwards, with the starting point being a reimagined Mitchell Park cultural destination, and then working backwards on how to fund it. As Milwaukee County Comptroller Scott Manske told the committee Tuesday, “The whole thought process here, I believe, was what is a way that this can be done and funded without using much of the county’s dollars.”

Domes planning was always colored by the county’s poor financial condition, with a structural deficit and stagnant revenue and many competing priorities for the county’s limited annual bonding. In December 2017, as the task force was beginning its work, former Supervisor Jason Haas, a member of the Task Force, reminded his colleagues that the county board and county executive would likely weigh whatever they were presented against the impact it will have on the county budget. “Without a really solid exciting vision… It’d be very difficult to sell keeping the domes open as they are,” he said.

In 2016, the board passed a resolution that established its policy to pursue the “repair and preservation of the existing Mitchell Park Conservatory,” and created the domes task force, and County Executive Chris Abele never signed it. Instead, he sent back the board a message that supported the effort, while noting it will be very expensive and the county has significant financial constraints.

Get a daily rundown of the top stories on Urban Milwaukee
In one particularly oxymoronic sentence, the former county executive wrote, “While the county does have financial constraints and many competing priorities, this should only inform our imaginations, not limit them.”

ArtsMarket took this ethos to heart, asking the task force to “Think big” in order to save the domes. But the financing stack they came up with that allowed for the smallest possible taxpayer obligation – approximately $13.5 million in funding – doesn’t work, according to the new analysis.

Comptroller Manske told the parks committee, “Based on the report and analysis, [ArtsMarket’s plan] is probably not likely the path forward. There’s some ideas in there that may work, but the bottom line becomes if the county wants to do this, it will probably have to work with the public, but there will be a county debt that will have to be issued for this.”

Bringing up the likely necessity that the county will have to bond for most, if not all, of the domes preservation, Manske injected reality into a high-level conversation that has been going on for nearly a decade.

Just recently, faced with the dissolution of another cultural landmark, the Milwaukee Public Museum, the county board quickly sprang into action, passing legislation that authorized the county to unprecedentedly exceed its self-imposed bonding cap and issue $45 million in bonds to pay for construction of a new museum.

Sup. Juan Miguel Martinez, whose district includes Mitchell Park, noted this, saying, “We just paid tens of millions to a private museum with no accountability, but won’t invest in the domes which we as a county operate.” The future museum will, in fact, be operated as a private-public entity, but museum leadership has been adamant that it can’t be branded a “public” museum.

In 2016, engineering firm Graef provided the county with a list of potential options for repairing the domes that included cost estimates, based on projected 2019 construction costs, and an estimated life for the facility after repairs were made. They ranged from $14 to $70 million. But if the county wanted to get at least 25 years or more out of the domes after repairs were made, it would have to spend at least $47 million.

The domes-preservation saga began during the administration of Abele, who was lukewarm at best about that goal and said that tearing down the domes was a “realistic option.” He explained, “If the public says, ‘Hey, we don’t want to spend, of the finite box of funding we have, we don’t want to spend on this $75 million,’ I’m not going to tell them they’re wrong.”

In his 2016 message to the board, Abele said he didn’t want discussion of their future to be limited to the “binary options” of fixing the current domes or tearing them down.

“Before the Domes, there was a Victorian-style conservatory that, after about 50 years, wasn’t safe anymore and was replaced by the Domes,” he wrote. “Now, about 50 years into the life of the Domes, we’re facing similar issues. It is time for us as a community and county to have a conversation about the best way to invest in the next phase of the park.”