A new green infrastructure project seeks to transform a largely ignored space under Interstate 43/94 on Milwaukee’s South Side.

The Milwaukee Metropolitan Sewerage District, Wisconsin Department of Transportation and the City of Milwaukee are partnering on an effort to remake the space under and around the elevated freeway at W. Becher St. The project is targeted at capturing stormwater runoff on-site and improving what is effectively a vacant lot on the north side of the overpass.

The partners singled out the multi-acre site in 2021 as their next target after showing off a similar project under the Marquette Interchange. That project, reportedly on the drawing boards for years, was fast-tracked after a homeless encampment known as “Tent City” formed.

Milwaukee County has advanced a “housing first” approach to homelessness and a recent point-in-time street survey found that those on the street dropped by 92% since the policy was implemented in 2015.

The Becher Street ramp site, which runs between S. 4th St. and S. 5th St., doesn’t have anything approaching the scale of Tent City, but there has been a consistent homeless encampment in recent years atop a sloped concrete embankment that leads down from the elevated freeway. As of Tuesday there appeared to be a campsite for one individual.

“The overpass area is of high interest to the surrounding community, straddling a river-side industrial corridor and residential neighborhoods. Traffic safety is also a concern due to the concentration of city streets and the highway on and off-ramps. The green infrastructure will also help create a greater sense of place and function for the community and discourage unwanted activity under the overpass,” says the MMSD project page.

Get a daily rundown of the top stories on Urban Milwaukee
The amount of space under cover of the freeway is greater than a traditional ramp set up because of the elevated frontage roads running parallel to that stretch of freeway. Additionally, there are two at-grade crossings on each side for the adjoining street and highway ramps. Because of the slope on the northern side of the site, there is a considerable amount of open space under the elevated freeway north of W. Becher St. City assessment records indicate that area is approximately four acres in size.

To the east of the site is Michels Corp’s new River One campus, a series of developable sites and the Harbor District and Bay View neighborhoods. To the west is the Lincoln Village neighborhood with a number of high-density streets of single-family and duplex houses.

MMSD’s project webpage says that bio-retention ponds and native plantings could be added to the median with the amount of pavement reduced, permeable pavers could be installed on the pedestrian crossings and path and shade-tolerant plants added to the under-freeway lot. Capturing stormwater on-site would keep it out of the Deep Tunnel system, reducing stormwater overflows.

The concrete-lined slope on the south side of the site, where the homeless encampment sits, would be depaved and replaced with native plantings.

The first public information meeting on the project is scheduled for May 17 from 4 p.m. to 7 p.m. at the Basilica of St. Josaphat, 2333 S. 6th St. Construction would be completed in 2023.

MMSD would pay for the stormwater-related improvements, with other entities needing to pay other changes. “Other community improvements are also being considered as part of the project’s planning process,” says the webpage. 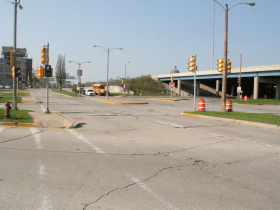 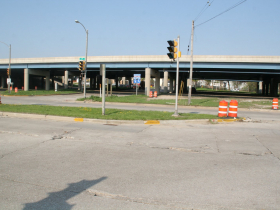 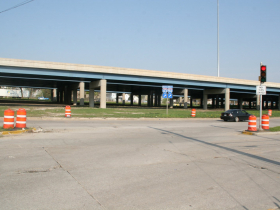 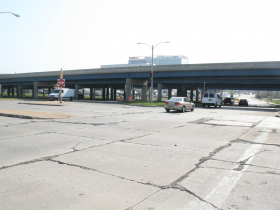 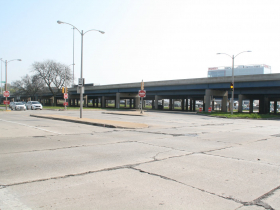 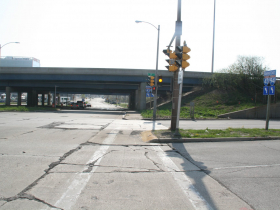