Oil Spill’s Spread Could Have Been Halted?

Komatsu criticized for not calling local officials to prevent spread of 400 gallons of oil. 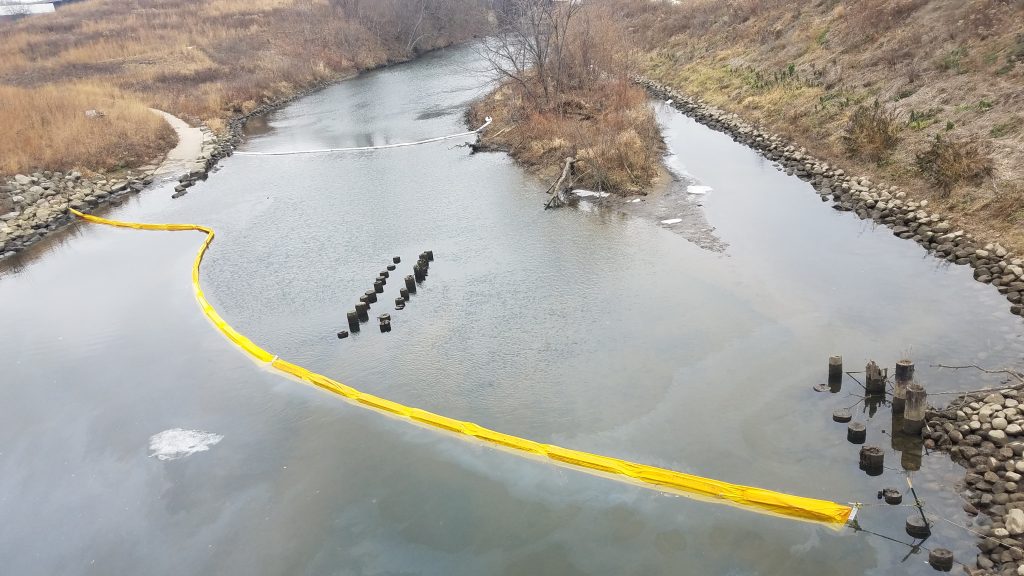 Oil from Komatsu’s spill goes around a boom in the Menomonee River near. S. 36th St. on Dec. 10. Photo from Ediquelson Camara.

Employees at Komatsu Mining spilled an estimated 400 gallons of oil on Dec. 3 into a storm sewer that led directly to Milwaukee’s waterways. The oil, which started its spread in the Menomonee River, made its way into the Milwaukee River, inner harbor and Kinnickinnic River.

Multiple city officials recently said that calling local partners instead of state and federal regulators would have reduced the oil’s spread.

John Koetz, president of surface mining at Komatsu, told a Common Council committee on Jan. 7 that the spill happened as a result of transferring oil between tanks. “The incident was reported that day,” said the executive. The company is paying for a cleanup operation that has collected 13,000 gallons of water and oil to date and includes the use of spot skimming and 145 absorbent booms.

“We estimate we have been able to clean up to 90 to 95% of the visible oil sheen,” said Koetz. But the cold weather and ice has put a halt to this, with boats unable to operate.

Komatsu, which is preparing to move from 4400 W. National Ave. in West Milwaukee to Milwaukee’s Harbor District, notified state and federal regulators of the spill when it happened. “We should have done a better job communicating more promptly the details to the stakeholders. We were focused on regulatory communications,” said Koetz.

“We didn’t find out about this oil spill until four days after it occurred; we expect a lot of this oil spilled out into the river stream particularly the upstream section, where it will remain for a long time,” said Cheryl Nenn, who serves as river keeper for the nonprofit Milwaukee Riverkeeper.

Get a daily rundown of the top stories on Urban Milwaukee
Others had to wait even longer to find out, and said they would have been able to help if called.

Port Director Adam Tindall-Schlicht said his staff didn’t learn of the incident until the 9th or 10th, about a week after it happened. Port Milwaukee is several miles downstream from where the spill occurred, but oil eventually made its way there. “Our staff train and prepare for incidents like this,” said Tindall-Schlicht. He said if called they could have been on-site faster than the private companies called to clean up.

Tindall-Schlicht said the incident provides a learning opportunity for other businesses and organizations with waterfront operations. “To anyone listening, exercise your response plans, do table top training,” he said.

There are three numbers that should appear at the top of any emergency plan according to the Milwaukee Fire Department.

“An enormous step was missed in this process. Not a single call was made to 911,” said Fire Chief Aaron Lipski. “If you have any sort of material release, please call us, this could have all been avoided.”

Lipski said MFD has the capabilities and personnel training to quickly respond to material spills.

Alderman Michael Murphy praised Komatsu for discussing the incident publicly. “I think that they take responsibility for this accident speaks well for them,” he said. “This is a learning lesson where all of us have a vested interest, not just the regulatory agencies.”

A series of decisions made more than 100 years ago play a role in how the spill played out.

The mining equipment manufacturer’s campus, which it intends to vacate next year for the new South Harbor Campus facility, is directly south of the Menomonee River. It is also the first property west of the Milwaukee Metropolitan Sewerage District‘s combined sewer area. If the spill occurred in a combined sewer it would have been routed to the Jones Island treatment plant instead of directly into the waterway.

The fact that the new plant wouldn’t have the same direct waterway connection isn’t lost on Koetz, who noted that the new campus would include new protections in addition to an indirect sewer connection.