What started as a hobby for Elvis Silva is becoming something bigger, much bigger.

He started Los Doggos, a Mexican-style hot dog cart, in 2018. These hot dogs are wrapped in bacon and covered in enough toppings to make a Chicagoan blush. They include grilled onions, raw onions, jalapeno, mayo, cotija cheese, a soy sauce and cucumber drizzle, tomatoes, mushrooms and shredded Ruffles chips. 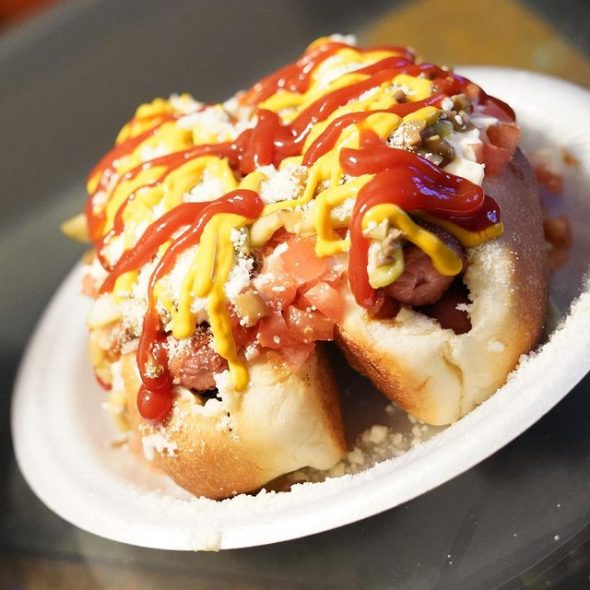 Silva recommends first-timers get a dog with everything, so they can experience all the flavors of a Mexican-style hot dog.

The bun is no ordinary bun from the grocery. It’s a recipe that Silva had a local bakery make for him. That bakery closed during the pandemic, so he said he’s currently in talks with another local bakery.

Silva, a barber by trade, opened this business out of a food cart that he said was approximately six feet long. The last time he had his cart out was October 2020. Now, Los Doggos is returning. This time in a 24-foot trailer, with some new menu items to boot.

The chorizo waffle fries will be back. But Los Doggos is also going to do Sonora Style Carne Asada tacos with hand-made tortillas. These are the tacos Silva grew up eating around Nogales, “in the borderland between Mexico and Arizona.”

Most carne asada in Milwaukee is cooked on a plancha, Silva said. Sonora style requires a grill. Silva’s grill will lend his tacos a smoky flavor reminiscent of those he ate as a child.

Los Doggos was originally something Silva did on the side, as he works full time as a barber. “I wanted to see if that’s something that I wanted to do,” he said. “I didn’t want to spend too much capital.”

Now, he’s going to step back a bit from barbering and focus more time on his food truck. He said he’s always liked cooking and working in a kitchen, so he plans to be behind the grill as often as he can. He also plans to have another cook and some family members working with him.

“It was a huge investment,” he said, “and I’m really excited to get it going and see what the people’s reaction is.”

Silva said he’s hoping to have Los Doggos open by the end of next month, with plans to set up somewhere in Walker’s Point near the intersection of S. 1st St. and W. Mineral St.