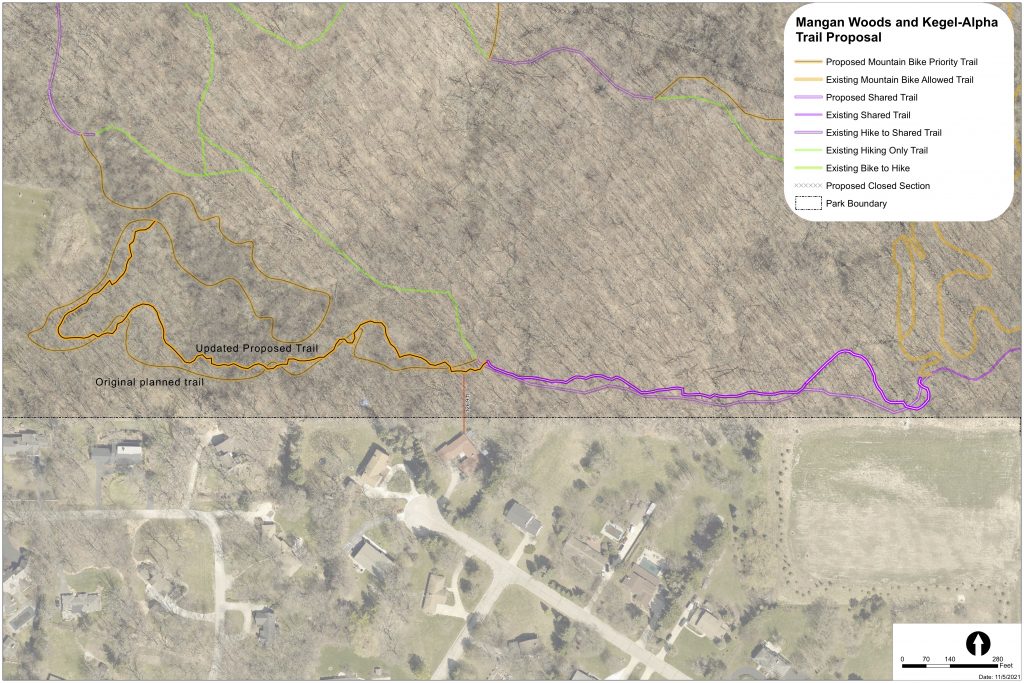 Milwaukee County Parks recently previewed their plan to reroute some of the trail in Mangan Woods, including the Kegel-Alpha mountain bike trail, in Greendale to protect vegetation.

Flooding from the Root River and unofficial social trails have been destroying vegetation and causing erosion in the woods owned by Milwaukee County. In 2017, the parks department began reviewing the damage and potential trail realignments. This included a three-season vegetation review by parks staff.

In April, the parks department paused work on the project after county supervisors began making moves to take authority over trail designs. Sup. John Weishan, Jr. reintroduced a resolution he authored in 2019 that would have given the board approval authority over major alterations to trails.

The impetus for this move was the work in Mangan Woods. Some residents nearby the woods were complaining about alterations being made to trails, and others were worried about trails coming closer to their property lines. But the proposal by a contingent of the county board ultimately failed to pass.

The main issue in Mangan Woods is the use of social trails. Parks Director Guy Smith and operations manager Ramsey Radakovich said in April that unofficial trails called social trails, or desire line trails, have been carved through the woods destroying plant life.

This trend has been made worse by frequent flooding of the Root River. When the river floods, bicyclists are more likely to go off trail or gravitate toward the social trails. “The increased flooding of the Root River has made a portion of the largest trail loop unusable for the majority of the mountain biking season for a number of years,” a report from the parks department stated.

“If we don’t give people a place to ride, they will ride the trail anyway,” Radokovich said. “In poor and un-ideal conditions.”

Get a daily rundown of the top stories on Urban Milwaukee
Mangan Woods sits just east of Whitnall Park north of W. Rawson Ave. It has been designated by the Southeastern Wisconsin Regional Planning Commission as an area of significance for the region. The Kegel-Alpha trail and the hiking trails near it have been in the woods for approximately 15 years, according to the parks department.

The parks department came back before the board’s Parks, Energy and Environment Committee in December to show its revised plans for the trail realignment.

The new trail plan makes some changes to the routes that caused some backlash from nearby residents. Peter Bratt, director of operations and skilled trades for the parks department, said the plan was reviewed by adjacent residents, as well as the local supervisor and other elected officials. Of note, the new trail loop does not go any closer to homes than the existing trail.

Bratt said the realignment involves less than a mile of trails and moves them away from the forest core. Interior trails will be closed to prevent further erosion from trail expansion and destruction of vegetation.

Bratt’s report to the board was informational only, and did not require an action by the board.