By Isiah Holmes, Wisconsin Examiner - Dec 14th, 2021 04:55 pm
Get a daily rundown of the top stories on Urban Milwaukee 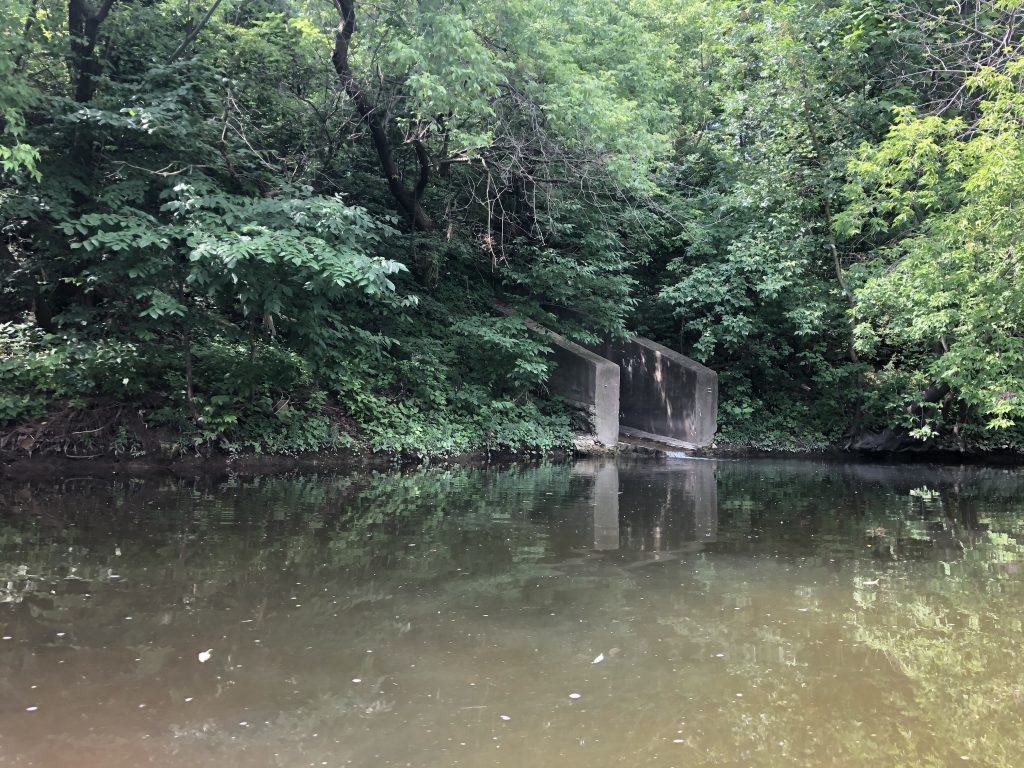 A sewer outlet on the Menomonee River near the Komatsu Mining campus. Photo by Jeramey Jannene.

Assessments of the damage from a 400 gallon oil spill in Milwaukee County are continuing both by the Wisconsin Department of Natural Resources (DNR) and local environmental groups. The spill originated in the Komatsu Mining facility in the area of West Milwaukee. The DNR told Wisconsin Examiner that it “was notified of a petroleum sheen on the Menomonee River in Milwaukee. The DNR can confirm that Komatsu experienced a used oil transfer error resulting in an estimated 400 gallons of used oil being released into their on-site storm sewer which drains into the Menomonee River.” The drain itself was located near American Family Field, formerly known as Miller Park.

While a cleanup of the drain was completed on Thursday, and absorbent booms were placed in locations along the river, questions still remain about the environmental impact of the spill. The DNR didn’t have information regarding potential signs of ecological damage including fish kills. While some species that depend on the river migrate to warmer climates in winter, many more remain dormant locally.

Komatsu stated that it is monitoring impacts to wildlife and waterways. “We sincerely regret this unfortunate accident occurred and want to apologize to the Milwaukee and Wisconsin community for any harm that has been caused,” the company stated. “We are devoting all necessary resources toward an aggressive and complete remediation effort to resolve the situation as quickly as possible and we are committed to determining the root cause to ensure such an incident does not happen again.”

On Friday, the day after the drain cleanup was completed, Milwaukee Riverkeeper was still keeping a close eye on the spill. “There is still a lot of information that we don’t know as far as how much product was ultimately discharged, what kind of oil was discharged, and for how long (outfalls are still boomed for containment), how this happened, and how much oil was recovered by the facility. We have been monitoring the river to note areas of accumulated oil, which need cleanup, as well as looking for any impacted wildlife,” Cheryl Nenn of Milwaukee Riverkeeper told Wisconsin Examiner. The Riverkeeper stated that they will continue monitoring the spill and are concerned about several aspects of the incident. “We are also concerned that the slow response and the rain are likely to send more oil contamination to our rivers downstream and out to the lake.”

Nenn added, “It’s also evident that the response has been slow and inadequate, and much of the oil is likely at the bottom of the river and unrecoverable, where it will likely affect water quality and aquatic life for some time. We are also seeing impacts to waterfowl and birds. The Wisconsin Humane Society rescued an oil-covered snowy owl last Friday, and we found an oil-covered goose yesterday [Thursday], which unfortunately they were unable to capture. So as long as there are still oil deposits on the water, it is possible there could be additional impacts to birds and waterfowl. We will continue to monitor this situation in the coming days and weeks, to advocate for immediate containment and cleanup efforts, as well as for long-term restoration and remediation projects.”

Concerns raised on damage to Menomonee River from 400 gallon oil spill was originally published by the Wisconsin Examiner.