How To Save The City, One Block At a Time 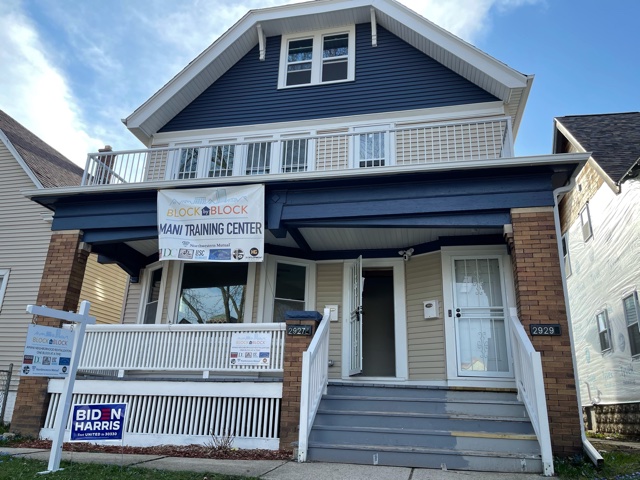 Can a combination of nonprofit partners and city housing programs be used to transform a blighted Milwaukee block?

The Northwestern Mutual Foundation announced an initiative to do just that in July 2019. With a series of partners, the insurance company’s philanthropic arm would work to revitalize the 2900 block of N. 26th St. in the Amani neighborhood.

The 38-parcel block was chosen by the Dominican Center and Amani United Neighborhood Association because it had a mix of owners and renters as well as a collection of already-engaged residents. It also had three vacant homes and a number of others in need of repairs. The neighborhood, bounded by W. Keefe Ave., N. 20th St., W. North Ave. and N. 30th St. is among the city’s most impoverished and has struggled since the decline and ultimate closure of the nearby Tower Automobile plant (now the Century City business park).

The Amani Housing Pilot is to serve as a model block for the neighborhood’s revitalization.

A new Wisconsin Policy Forum (WPF) report identifies how future efforts could better access city housing programs and how the City of  Milwaukee could adjust its programs to make them more accessible. Project partners encountered a number of problems accessing the funds, including the sequence in how they must be paired with other funding sources.

The goal for the pilot is to acquire, rehab and sell two homes, repair other houses on the block and to reduce tax-delinquent parcels on the block by 50%. Other goals include providing job training for 30 city residents and employing five Amani residents on the effort after training them. A benchmark of addressing safety concerns of 95% of block residents is included. Two Amani residents are to receive counseling and other support to prepare them for homeownership.

The pilot effort is still underway, so WPF had an explicit focus on not evaluating its overall success. “Our primary objective, rather, is to present a case study that can help to inform and strengthen similar projects in the future,” says the report.

Get a daily rundown of the top stories on Urban Milwaukee
There may be no shortage of projects in the near future. Much of the city’s American Rescue Plan Act funding is going to housing programs and a recent study also identified the overwhelming need for affordable housing in the city.

For the Amani project, Ezekiel Community Development Corp. (CDC), which serves as the general contractor and training manager, visited every house on the block to meet with residents in 2019. It also relocated its headquarters to one of the vacant homes, saving a home that was otherwise slated for demolition. A total of $169,475 was spent on its rehabilitation and it will eventually be sold for $50,000 to a lower-income buyer.

LISC Milwaukee is assisting in project leadership, the Legal Aid Society of Milwaukee is providing support and the Milwaukee Christian Center acquired two of the vacant homes. MCC is currently renovating those homes, and training youth in construction practices, with an intent to sell them both to lower-income homebuyers in 2022.

Repairs on 16 homes have been completed, with 25 scope of work plans created. A total of 35 people have been trained, with six certified in lead abatement. Seven minority-owned contractors have had their work capacity expanded.

Most of the pilot’s challenges have fallen on the financial side.

“Pilot leaders hoped to tap available city of Milwaukee housing programs and funding to pay for a large portion of the work, but for a variety of reasons, almost all pilot expenses have been covered by Northwestern Mutual,” says the report. “One major reason is that most city programs are supported by federal funding sources that are restricted to certain uses, which did not align well with the pilot’s multi-faceted design and emphasis on worker training.”

Federal HOME funds, which are allocated first to the city as a grant, were unavailable to cover some of the anticipated costs as they do not support job training expenses.

But another financial issue was Northwestern Mutual’s flexibility. It was a rare case where too much flexibility caused issues. NM’s flexible money was tapped first, before paperwork for more restrictive city programs was submitted. Using the former first ultimately blocked out access to the latter according to the report.

“In retrospect, pilot leaders say they should have first exhausted every opportunity to tap the HOME funds and other city home repair programs before beginning to use the much more flexible funding NM was providing,” says the report.

The city’s various housing programs are proving daunting for all but those already experienced with them.

“Pilot leaders and block residents found it very difficult to access city housing programs and funding, which suggests the need for the city of Milwaukee to simplify access to its home repair programs and the process of applying for them,” says the report.

Further complicating the matter, the project partners found that many residents are skeptical of both new nonprofits working in the area and the government.

The Legal Aid Society is described as a key partner because its staff has worked extensively to support the many homeowners who have inherited their homes and don’t have clear title as well as elderly homeowners don’t have the necessary financial power of attorney or will in place to access the city programs. The report notes that the society’s work has not only made the homeowners eligible, but put the families on stronger financial footing going forward.

Legal Aid also created a “skin in the game” framework where homeowners are expected to contribute 5% and landlords 10% to home repair projects. Contributions are allowed to come from sweat equity.

The WPF report does note that Milwaukee Christian Center, which has prior experience, was able to access $240,000 in federal HOME funds through the city’s Community Development Grants Administration office. It paired those funds $154,000 in other funds, including two mortgages, to rehab its two homes.

One way to make program access easier? Create a designated place to go for people with questions. Homebuying counselors ACTS Housing and Housing Resources, Inc. were given as possible examples. The report does credit the grant office for working to make special accommodations for the Amani project when possible.

The report offers an optimistic take on the future, now that many issues have been identified.

“Perhaps the pilot’s most important accomplishment is the development of a strong coalition of partner organizations that has worked through many challenges together and that has now gained experience and knowledge that can be applied to future work on other blocks in Amani,” write the authors.

The partners and report also offer a price tag to move forward on other blocks.

The partners think the average Amani block could be revitalized for approximately $1.95 million. “Pilot leaders stress that these estimates are likely at the high end and that this work may cost less on some blocks,” says the report.

Through September, the partners have spent approximately $800,000 on the first block.