By WPR Staff, Wisconsin Public Radio - Nov 22nd, 2021 08:22 pm
Get a daily rundown of the top stories on Urban Milwaukee 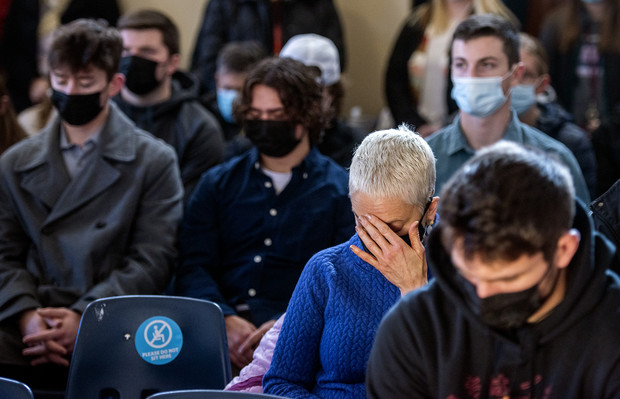 Attendees close their eyes in prayer during a vigil Monday, Nov. 22, 2021, at Carroll University in Waukesha, Wis. Angela Major/WPR

Waukesha residents are grieving and still trying to process the tragedy that now plagues the city’s holiday parade.

Shortly after 4:30 p.m. Sunday, a driver plowed through the Waukesha Christmas Parade downtown, killing five people and injuring more than 40.

A joyous scene of marching bands and children dancing in Santa hats and carrying pompoms turned deadly in an instant, as an SUV sped through a barricade and slammed into the popular and crowded Christmas parade as spectators watched in horror.

The parade in suburban Milwaukee has been a tradition for nearly six decades, Mayor Shawn Reilly said Monday afternoon.

“Last night, that parade became a nightmare… We have so much healing that needs to occur,” Reilly said.

Early Monday morning, the parade route, which was packed with spectators the day before, was littered with abandoned folding chairs scattered about. Portions of the route were blocked off with police tape. And downtown was eerily quiet. 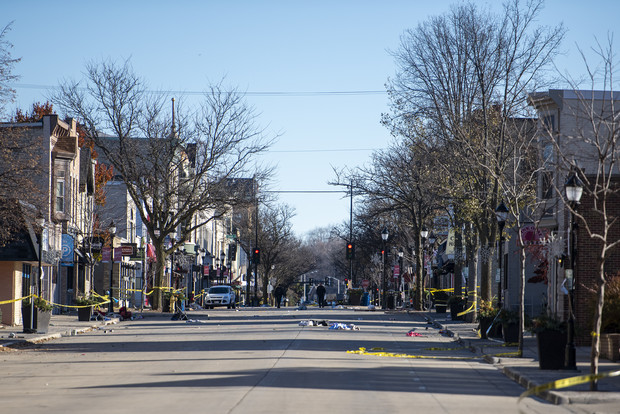 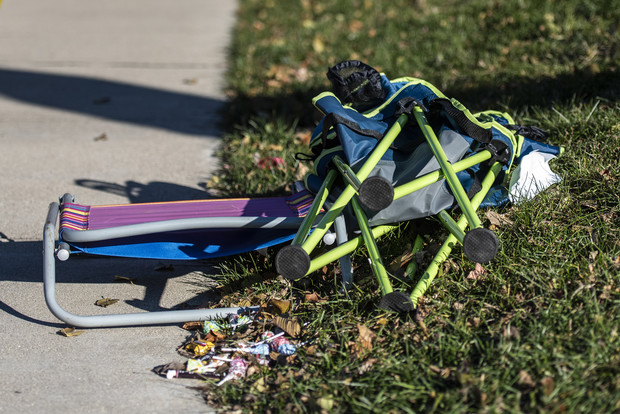 A folding chair and candy remain on a sidewalk near the Christmas parade route Monday, Nov. 22, 2021, in Waukesha, Wis. Angela Major/WPR

Carroll University junior Olivia Bugajny went to a vigil Monday at her campus chapel in Waukesha with several of her friends, some of whom she sheltered with after students got an alert to stay put.

Alex Larson was also at the vigil. He said he was in a car near downtown Sunday when he started getting alerts that something was happening.

“It’s unreal,” Larson, a senior at the university, said. “It was like one of those things that you kinda always dread about, you kinda always learn how to defend against it, but at the end of the day, until it happens, it’s just, it’s crazy when it actually happens here.”

Wilhelmina Zastrow, a sophomore at the university, is from a town 40 minutes from Waukesha. She said she’s especially taken aback by the incident as she thinks about the students in the various marching bands that took part in the parade, such as the Waukesha North Marching Band, Waukesha West Bands, the Marching Blackshirts of Waukesha South and the Carroll University Marching Pioneers. 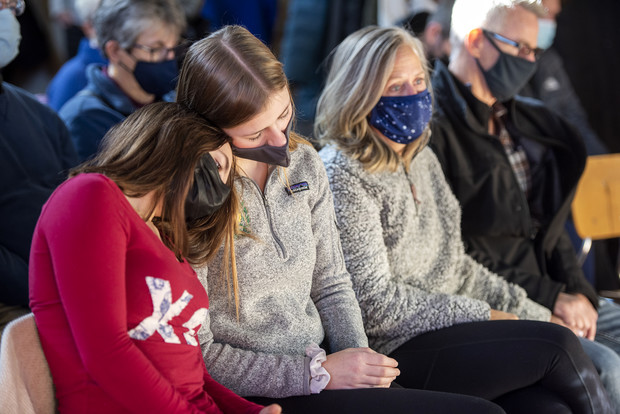 Carroll University students Kiya Wadsworth, left, and Emily Hintz lean on each other as they attend a vigil held by the university after the Christmas parade tragedy Monday, Nov. 22, 2021, in Waukesha, Wis. Angela Major/WPR

At a Monday press conference, an emotional Waukesha Police Chief Dan Thompson identified the five people, four women and one man, killed Sunday. As Thompson read the names, he slowed down, composing himself.

Twenty-nine people arrived at ProHealth Waukesha Memorial Hospital immediately after the incident, many will be released from the hospital Monday, one hospital official said. Some people taken to Waukesha Memorial were transferred Sunday to Children’s Wisconsin.

During a press conference Monday, Children’s Wisconsin officials said the first patient arrived around 5:30 p.m. Sunday. As of Monday morning, 10 children are in the intensive care unit — six are in critical condition, three are in serious condition and one is in fair condition. The eight other children are in fair condition and being treated elsewhere at the hospital. Six of the patients underwent operations Sunday night. Two additional patients are undergoing surgeries Monday. The 18 children includes three sets of siblings, health officials said.

The hospital received patients until about midnight.

A group called Milwaukee Dancing Grannies participated in the parade. In a Facebook post Monday morning, the group said some of their members are among those killed.

“Our group was doing what they loved, performing in front of crowds in a parade putting smiles on faces of all ages, filling them with joy and happiness,” the post reads.

The Archdiocese of Milwaukee identified some of the injured Sunday night as a Catholic priest, multiple diocese parishioners and Waukesha Catholic school children.

Archbishop Jerome Listecki released a video statement Monday, calling for “prayer for all those involved, their families and those who are traumatized from witnessing the horrible scene.”

“I feel compelled to stand in solidarity with those who have been affected by this senseless act,” he said.

Gov. Tony Evers ordered flags to be flown at half-staff Monday as a mark of respect for the victims.

“Kathy Evers and I are praying for Waukesha tonight and all the kids, families, and community members affected by this senseless act. I’m grateful for the first responders and folks who acted quickly to help, and we are in contact with local partners as we await more information,” Evers wrote Sunday night on Twitter.

At the Monday press conference, Thompson identified Darrell E. Brooks, 39, as the person who drove through the parade, injuring and killing attendees. Brooks was taken into custody not far from the parade and not long after the incident.

At a press conference Monday, Thompson said he is referring five counts of first-degree intentional homicide to the district attorney’s office. Additional charges based on the investigation could be forthcoming, Thompson said.

Thompson stressed law enforcement is confident Brooks acted alone, the event was not a terrorist attack and that Brooks was not being pursued by law enforcement when he drove through the parade.

The police chief confirmed one officer shot at Brooks’ vehicle in an effort to try to stop him, but stopped firing because of the number of people. Thompson said the officer is on administrative leave as part of the department’s protocol.

Brooks, a Milwaukee resident, was involved in a domestic disturbance shortly before he “intentionally drove” through the parade, Thompson said. Brooks drove through police and barricades before speeding through the parade route.

Brooks is awaiting trial for several prior criminal charges. According to a statement from the Milwaukee County District Attorney’s Office, Brooks was charged with two counts of second-degree recklessly endangering public safety and possession of a firearm by a felon in July 2020.

Brooks was released from custody in February after having his bail reduced because the court was unable to meet his request for a speedy trial.

Earlier this month, Brooks was again charged with second-degree recklessly endangering safety, as well as felony bail jumping, battery and obstructing an officer. He was released from custody Nov. 11 after posting a $1,000 bail.

District Attorney John Chisholm said in a statement Monday that the bail recommendation was “inappropriately low in light of the nature of the recent charges and the pending charges against Mr. Brooks.”

Chisholm said his office was conducting an internal review of the decision “in order to determine the appropriate next steps.” 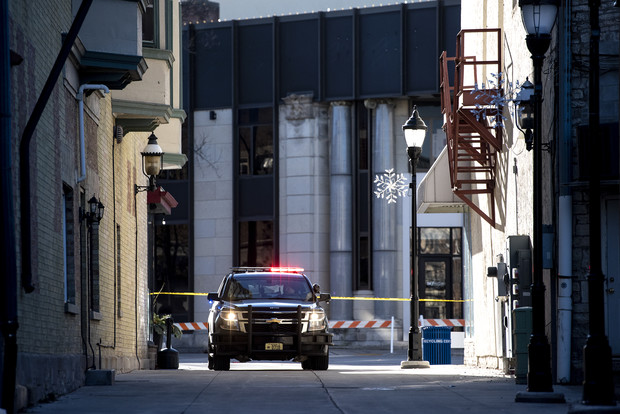 A police car is parked near the scene of the Christmas parade tragedy Monday, Nov. 22, 2021, in Waukesha, Wis. Angela Major/WPR

The Waukesha School District canceled classes for students Monday and Tuesday. The district is on Thanksgiving break Wednesday through Friday. Classes will resume Monday, when extra counselors will be available. Counselors are also available through Disaster Distress Helpline. City officials are encouraging people to reach out to the helpline, open 24/7, by calling or texting 800-985-5990.

Waukesha Catholic School System canceled school Monday and held a prayer service for students and their families. The system is on Thanksgiving break Thursday and Friday. There was no word on if classes would resume Tuesday or Wednesday as of 2 p.m. Monday.

The University of Wisconsin-Milwaukee at Waukesha also canceled classes Monday to allow the “campus community time to mourn, grieve, and pray.” Counseling services are available. Email wak-counseling@uwm.edu to make an appointment. The university is on Thanksgiving break Wednesday through Friday. There was no word on if classes would resume Tuesday as of 2 p.m. Monday.

Children’s Wisconsin is also offering a mental and emotional support line. People can call 414-266-6500 to be connected to a counselor.

A temporary memorial will be at Veterans Park. Any items can be placed there, according to the city.

The Waukesha County Community Foundation and United Way of Greater Milwaukee and Waukesha County announced a fund that will be used to support the families affected by the tragedy. To donate, visit www.waukeshafoundation.org/parade.

One thought on “Waukesha Shocked by Killings, Schools Close”