New Vegan Restaurant For East Side

Plus: indoor dining returns to Uncle Wolfies. West Allis cafe gets new name. And a downtown bar gets suspended. 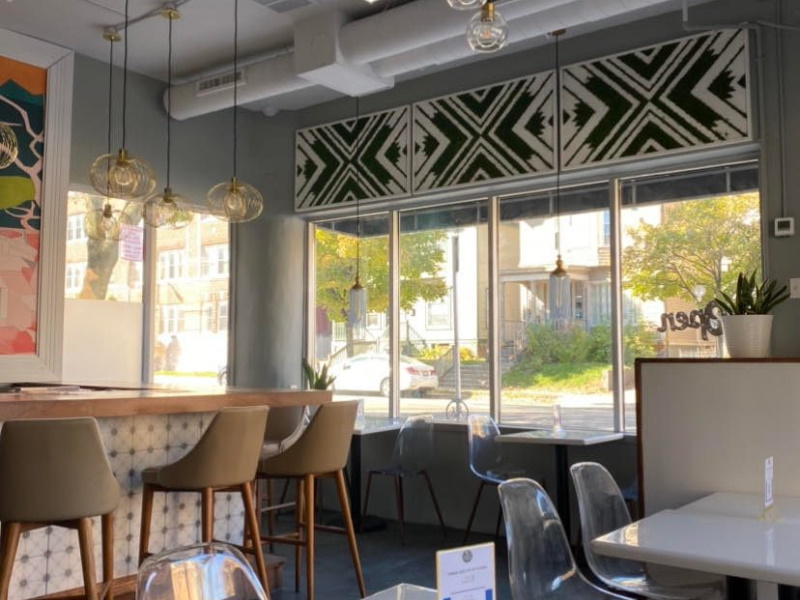 Earlier this year in May, it was announced that Celesta, a popular vegan restaurant on Milwaukee’s East Side at 1978 N. Farwell Ave., was closing its doors after three years of business. Later, it was announced that a new vegan venture would take over the space. That restaurant, called The Lafayette Place, is now open, serving an entirely plant-based menu, as well as coffee, brunch drinks, smoothies and more. The restaurant was opened by Angela Wierzbinski and Amy Plennes, the duo behind Walker’s Point restaurant The National. The Lafayette Place is open Thursday through Sunday from 8:30 p.m. to 2 p.m. Both dine-in and takeout food is available. Lori Fredrich reports:

… the menu runs the gamut from basic breakfast dishes like the Classic (house potatoes, Impossible sausages, tofu scramble, and Rocket Baby sourdough toast, $10) to breakfast sandwiches, including a bagel sandwich made with Ruby’s Bagels filled with tofu scramble, sausage, Violife cheese, tomatoes and garlic mayo ($10) and the Vegan Breakfast Sammie (a popular hold-over from The National) with Impossible sausage, a hashbrown patty, cheese, guacamole and chipotle sauce on a pretzel bun ($12.50).

On the sandwich side, hungry lunch-goers will find a portobello banh mi with sesame soy marinated mushrooms, jalapenos, pickled slaw and cilantro Sriracha mayo (served with kettle chips, $10); … and a Southern Po’Boy featuring cajun fried tofu piled high on a baguette with pickled onions and cucumbers, arugula and remoulade (served with chips, $11.50).

Uncle Wolfie’s Breakfast Tavern, a popular spot with a tucked away location and seven-days-a-week brunch menu, is reopening its dining room for indoor dining. The restaurant had been offering takeout since the initial COVID-19-related shutdowns in March 2020. An attached handmade goods shop, Orange and Blue Co., will reopen for browsing as well. Carol Deptolla reports:

Uncle Wolfie’s will be open 8 a.m. to 3 p.m. Fridays to Mondays. Everyone must wear a mask over nose and mouth except when seated. Carryout will continue as long as the restaurant can accommodate it, co-owner Wolfgang Schaefer said.

Instead of crowding inside the restaurant to wait for tables, customers will wait outside by heaters, Schaefer said. He’s planning to have QR codes outside where patrons can order beverages, including hot drinks.

Urban Joe Cafe & Bar in West Allis has reopened under a new name. But fans of that old cafe should fear not — its in the same exact location, with the same chef and an almost identical menu. The restaurant, now going by the name Su Plus Two Restaurants & Bar, held a ribbon-cutting ceremony for its reopening on November 9. Hours of operation are from 8 a.m. to 2 p.m. and 4:30 p.m. to 9 p.m. Monday through Friday and from 8 a.m. to 9 p.m. on Saturday. Bob Dohr reports:

Those familiar with Urban Joe’s will recognize the mainstays of the Su Plus Two menu: salads, wraps, paninis, sandwiches, soups, crepes, breakfast burritos and omelets, along with premium Valentine coffees and other beverages.

About 20%-30% of the eatery’s customers are holdovers from the Urban Joe days, Jose [Cisneros] said.

The evening hours are a change… Jose said they’re able to attract additional customers by being open later.

Two downtown nightlife hot spots will suspend operations for nearly three weeks at the end of November. The bars will be closed from November 26 to December 15 after the Milwaukee Common Council unanimously voted to suspend the liquor licenses for the two bars, which are attached to one another. A 10-item police report detailed incidents such as issues with the bar’s security team, the bar remaining open after legal hours and some violence-related conflicts. Jeramey Jannene reports:

Andrea Shafton, who co-owns the bar with her husband and whose family has owned the building at 1207 N. Water St. since 1976, said changes would be made.

“The main reason I would make my motion is the many items in the police report, specifically the ones that were a failure of management,” said (area Ald. Nik Kovac). The committee unanimously approved his motion.

Thanksgiving will be the last day you can get your hands on $1 taps and $2 rails until December 16. Duke’s and Scooter’s must close starting at 12:01 a.m. on the morning of Black Friday.

Correction: An earlier version of this story stated that The Lafayette Place would serve some of Celesta’s dishes. It will not.