What Explains the Virginia and New Jersey Election Results? 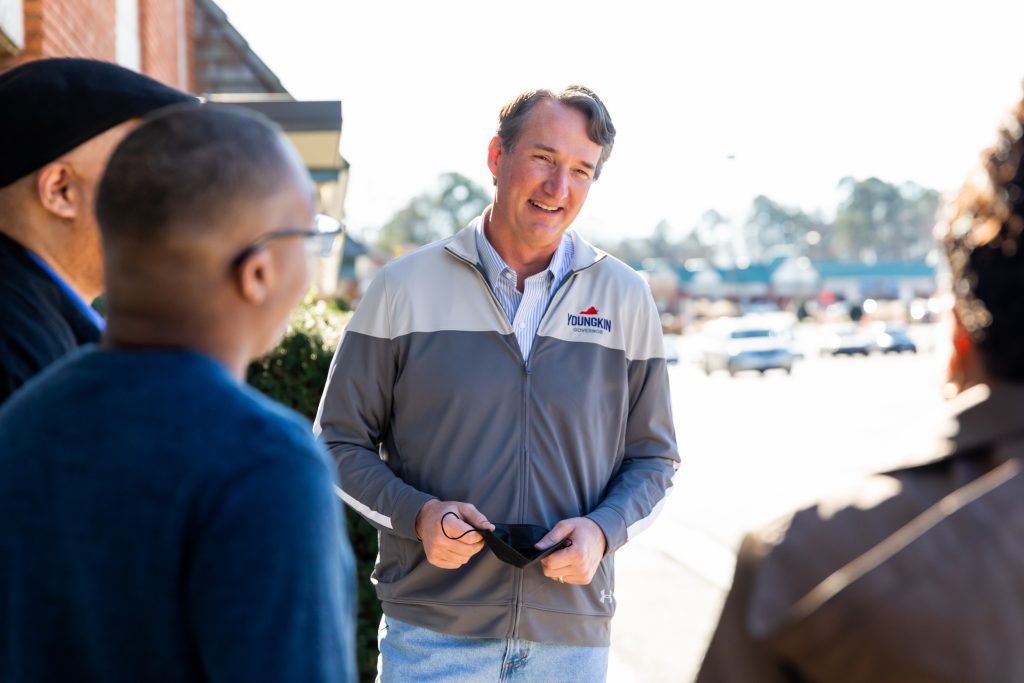 Why did Democrats lose the governor’s race in Virginia—and barely win in New Jersey? Before this year’s election, both states were considered safely Democratic.

The graph below compares the unofficial 2021 vote tallies with those for the previous governor election in 2017. Note that the vote for the Democratic candidate in each year — Ralph Northam in 2017 and Terry McAuliffe in 2021 – grew by 13%. By comparison, the Republican vote total– Ed Gillespie in 2017 and Glenn Youngkin in 2021—grew by 42%, handing the victory to Youngkin. 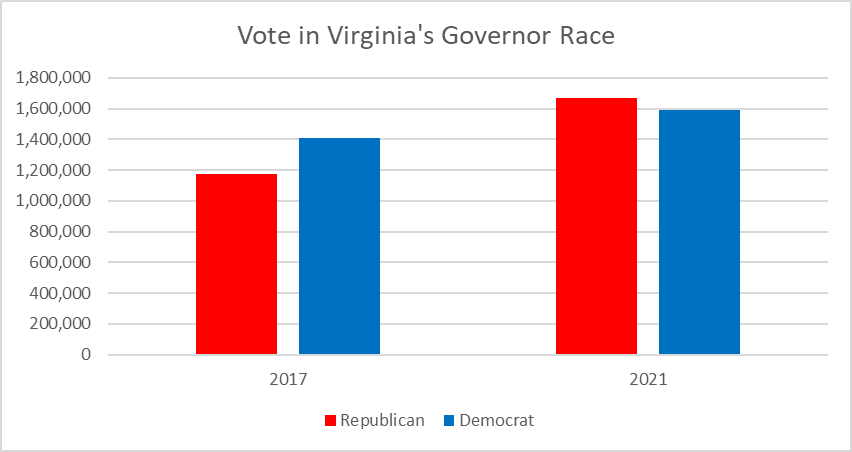 The graph below similarly shows election results for New Jersey. Again, both parties’ totals grew between 2017 and 2021: 6% for Democrat Philip Murphy, the winner both years compared to 36% for the Republican—Kim Guadagno in 2017 versus Jack Ciattarelli this year. 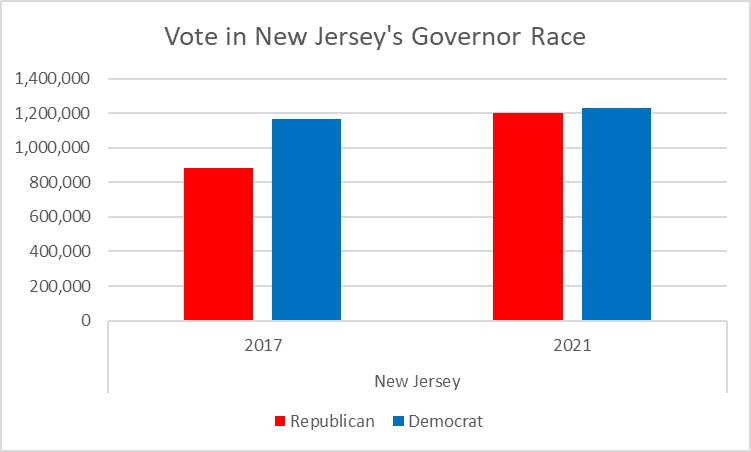 The two previous graphs suggest that the Republicans’ victory in Virginia and near-miss in New Jersey stem more from a higher turnout in Republican counties than in Democratic ones, rather than voters switching their support. The next bubble plot compares the increase in total voting in each Virginia county. on the vertical axis, to the percentage of the vote that went to the Republican candidate, Gillespie, in 2017, on the horizontal axis.

Bubble charts are very similar to scatter plots, except that the size of the bubble is proportional to some variable. In this case, the sizes of the bubbles are proportional to the population of each county. As can be seen from the chart, Virginia has many counties and other government units that act like counties when it comes to elections, accounting for much of the scatter in the plot. 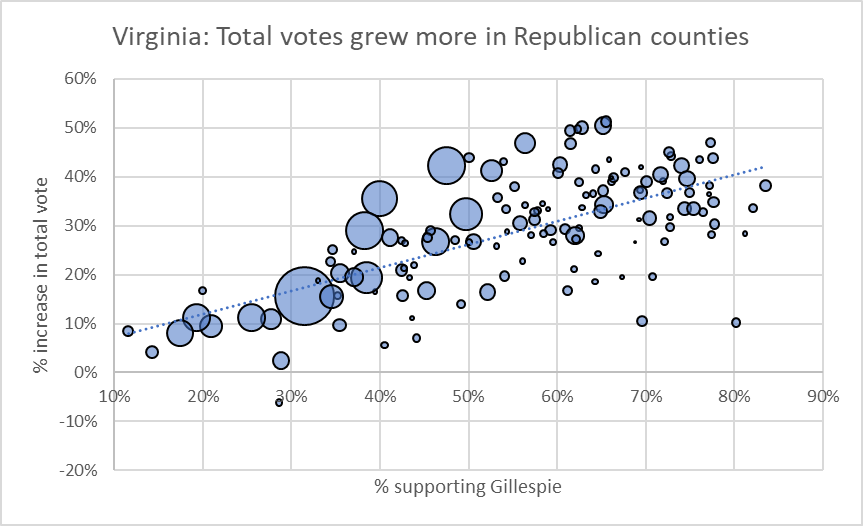 The next chart compares the growth in voter turnout in each New Jersey county between 2017 and 2021 (on the vertical axis) to the percentage of voters who supported Murphy in 2017, on the horizontal. The better that Murphy did in 2017 the smaller the growth of the total vote in 2021. Again, this suggests that the problem for Democrats was not large-scale party switching, but a much higher turnout by people living in Republican counties. 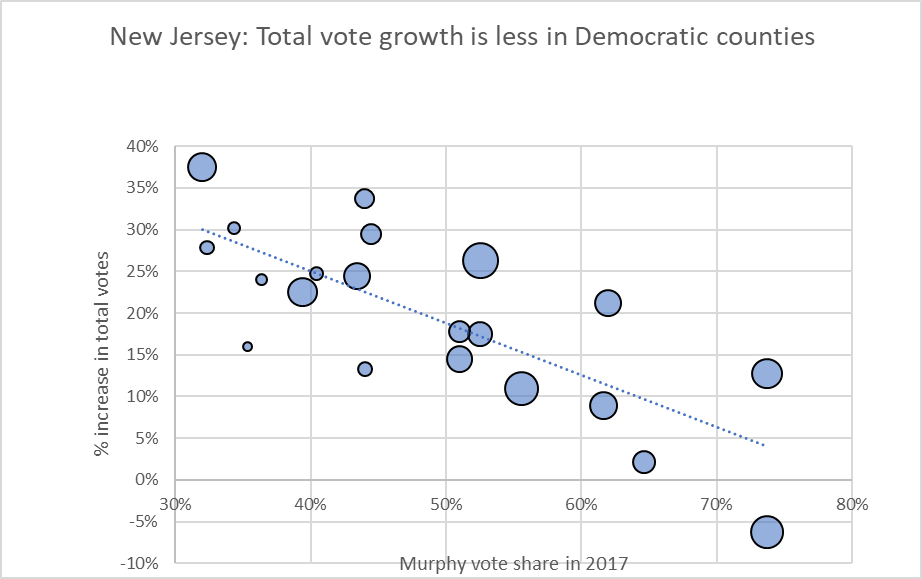 In Virginia and New Jersey, turnout in Democratic cities and increasingly Democratic suburbs was weak. Why were Republican-focused voters so much more motivated to vote than those who had voted Democratic in the past? A number of causes have been suggested, including the unexpectedly messy departure from Afghanistan, the inability of Democrats in Congress to agree on Biden’s legislative proposals, and frustration that COVID-19 was still around. Democrats, it was said, lost their focus at the national level, and paid a price at the state level.

This was a rare election that was driven by concerns about public schools. These concerns primarily revolved around two issues: frustration with school closings in response to the pandemic and so-called “critical race theory.” The remainder of this column addresses the second of these.

In his successful campaign in Virginia, Youngkin made opposition to critical race theory front and center. The typical response by Democrats was to point out—accurately–that critical race theory was not practiced in public schools, that it was limited to graduate law schools. However, this did not stop the conservative campaign to apply this label to a set of ideas that make many people uneasy.

The political scientist Ruy Teixeira argues that what he calls the “Fox News fallacy blinds Democrats to real problems. This is the notion that if Fox News (or another conservative site) “criticizes the Democrats for X then there must be absolutely nothing to X and the job of Democrats is to assert that loudly and often. The problem is that an issue is not necessarily completely invalid just because Fox News mentions it.”

Consider the following graphic describing “white culture” that was posted at the Smithsonian National Museum of African American History and Culture, widely shared on the conservative blogosphere, and subsequently removed. It has plenty to offend both white and Black people. For example, it ascribed traits such as “hard work,” “self-reliance,” “delayed gratification,” being on time, an “emphasis on scientific method,” and politeness to “white culture.”

There is an odd racism to this. This list implies that these are traits that Black culture does not share. Otherwise, there would be no reason to list them.

Other cultural traits attributed to whites seem straight out of the 1950s. Consider the list under Family Structure, describing an ideal family as one in which the wife is a homemaker and subservient to the husband, who is the family breadwinner.

Is this chart an example of critical race theory? I am sure that those who know the theory would say no. Yet, Republicans from Youngkin to the commentators on Fox News would insist that the answer is yes. And the folks who watch Fox would believe them.

In the last few years, an “antiracism” industry has grown and prospered. Last year, the New York Times Magazine carried a long article by Daniel Bergner entitled “‘White Fragility’ Is Everywhere. But Does Antiracism Training Work?” In it, he reports on Robin DiAngelo, whose book, White Fragility, was a best seller. Bergner reports that DiAngelo:

… tells her audiences — whether in person or, now, online — to alter the language of the narrative about the Brooklyn Dodgers star. Rather than “he broke through the color line,” a phrase that highlights Robinson’s triumph, we should say, “Jackie Robinson, the first Black man whites allowed to play major-league baseball.”

Why does minimizing Robinson’s crucial role in opening up baseball strike a blow against racism? Is this a message that Black children should hear?

Consider the claim that support for the scientific method uniquely describes white culture. And then consider the many white people, recently including Aaron Rodgers, who reject COVID-19 vaccinations, preferring ivermectin, hydroxychloroquine, or some other untested remedy.

The evidence from Virginia and New Jersey is that programs called “antiracist” by their supporters or “critical race theory” by Republicans acted as a drag on Democratic candidates. As far as I can tell, little is known about the effectiveness of such programs. Which gives Democrats both reasons of policy and politics to examine their impact and not to simply dismiss concerns about them.

2 thoughts on “Data Wonk: What Explains the Virginia and New Jersey Election Results?”