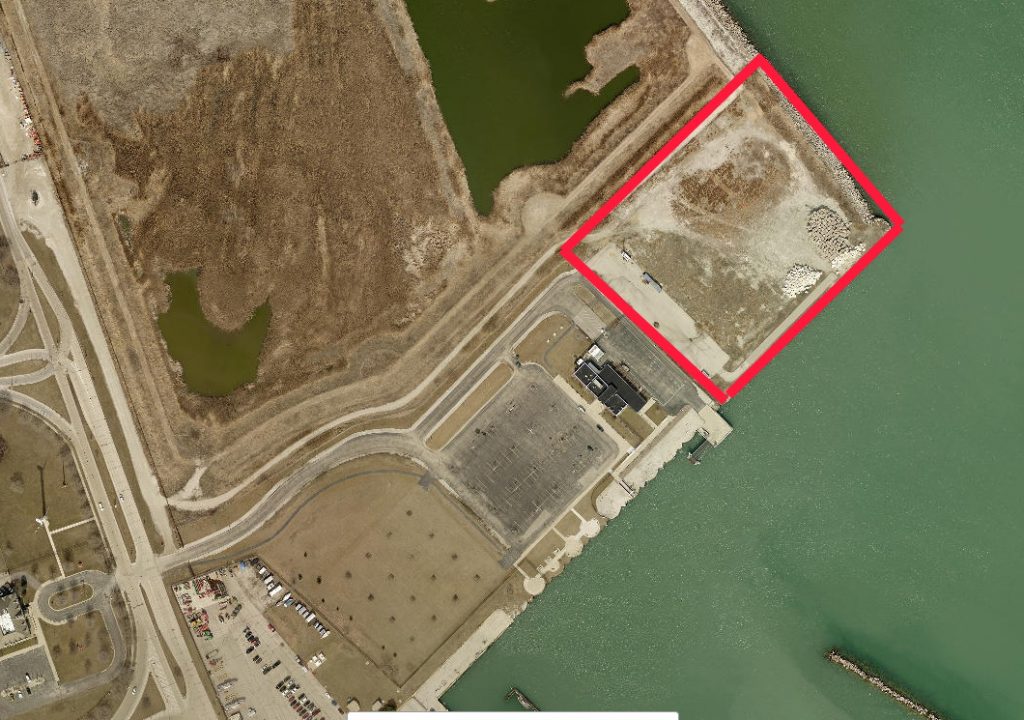 The City of Milwaukee is seeking a partner to develop a five-acre parcel that sticks out in Lake Michigan.

But don’t expect to see a new tower or other residential development. The parcel is on filled lakebed and any future use must comply with the Wisconsin Public Trust Doctrine.

One of those uses could be supporting the more than 10,000 cruise ship passengers that are expected to pass through the site starting in 2022. Billed as a “welcome center” location in the RFI, any future development should have a goal of integrating on-site U.S. Coast Guard screening for passengers and multi-season public access opportunities.

Vessels must be able to be docked on both the south and east sides of the parcel, 2320 S. Lincoln Memorial Dr. Earlier this year, Port Milwaukee secured a $500,000 state grant to upgrade the adjoining dock.

The site is known as the South Shore Cruise Dock. It is located immediately east of the Lake Express High Speed Ferry Terminal. The RFI says “more compelling proposals” would propose a use that complements the existing ferry terminal, with up to three daily crossings between Milwaukee and Muskegon, MI.

The parcel is filled lakebed. Known as the Jones Island Confined Disposal Facility (CDF), it was first created in 1975 by the Army Corps of Engineers and progressively filled.

Get a daily rundown of the top stories on Urban Milwaukee
The Lake Express terminal building also sits atop the CDF. Piles anchor the one-story building, with a floating concrete floor sitting atop a clay soil cap. Similar to the ferry terminal, Port Milwaukee suggests that a methane alarm system should be a requirement for any future development.

The development of the site is also hampered by the lack of utility service. Any future tenant would be responsible for bringing utility access to the site, including water, sewer, gas or electrical service.

But the large lakefront site and built-in visitor base present potential upside.

“This RFI represents one of the few, new, bareground lakefront opportunities available in Milwaukee for the next several decades,” said Port Milwaukee director Adam Tindall-Schlicht in an email announcing the RFI.

Any development of the site would occur as part of a lease, not a sale. The deal would be structured with a 15-year initial term and three subsequent five-year options.

The site is located at the southern end of the 470-acre port. And while most of the port tenants are industrial users, the port is also the landlord for Milwaukee World Festival, Inc. (Summerfest), Pier Wisconsin (Discovery World) and the Harbor House restaurant.

A newer portion of the CDF, several times the size of the offered site, is located immediately to the north and is a draw to migrating birds and bird watchers alike.

A new, 42-acre fill site, known as the dredged material management facility, is proposed to be constructed north of the CDF. We Energies is leading the design of the facility. The City of Milwaukee will ultimately take ownership of it. It would be used as part of an environmental cleanup effort designed to remove the federal “area of concern” designation from Milwaukee waterways.

RFI responses are due Dec. 17 at noon. A selection is scheduled to take place by Jan. 14.

A copy of the RFI is available on Urban Milwaukee.

One thought on “Eyes on Milwaukee: Port Seeks To Develop Cruise Ship Dock”