By Ruth Conniff, Wisconsin Examiner - Nov 6th, 2021 04:43 pm
Get a daily rundown of the top stories on Urban Milwaukee 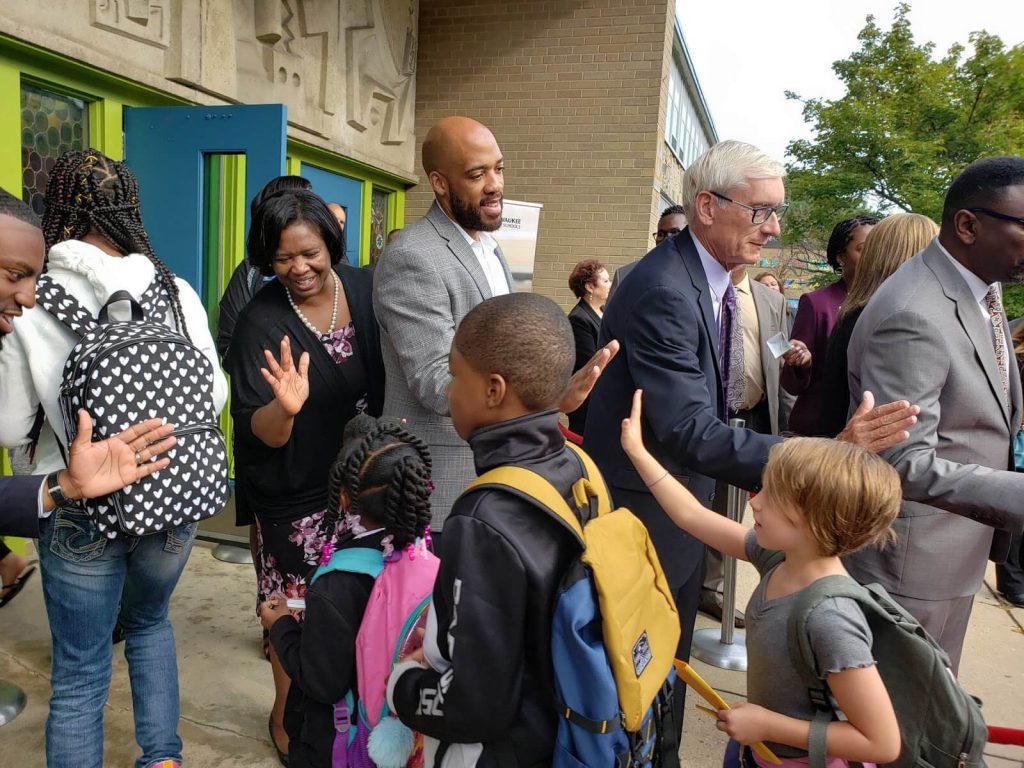 Back to School welcome 2019 with Carolyn Stanford Taylor, Mandela Barnes and Tony Evers. File photo from the of Office of Gov. Evers.

Gov. Tony Evers signed a bill into law Friday regulating public access to schools’ financial information that requires the Department of Public Instruction (DPI) to create an online portal, available for the 2023-24 school year, that displays financial data collected from all school districts and independent charter schools. The new law creates an 11-person advisory committee to develop recommendations on the categories of information to be made accessible to the public.

Although the bill passed the Senate Sept. 28 with only one Democratic vote in favor, the Assembly concurred the same day on a voice vote.

The Wisconsin Institute for Law & Liberty (WILL) celebrated the new law. “Citizens want to know what is working at the district-level. They deserve to know which districts are proving efficient and which ones are wasteful,” the rightwing legal outfit said in a statement. “They want to know how spending correlates with academic outcomes. So, it’s time to give them the proper tools. The first step is accessible, uniform information on public school district spending.”

Republican proponents of the assessments say they would  reverse the decline in reading test scores for Wisconsin children and help close the state’s worst-in-the-nation achievement gap between Black and white students.

Democrats say more testing won’t prove anything that teachers and school officials don’t already know, and that more resources, not more assessments, are what schools need.

Democrats also raised questions about the list of company names in the bill, which specifies that DPI should approve certain name-brand tests including the Acadience reading assessment, FastBridge reading assessments and the Renaissance Star Early Literacy assessment.

It is not standard practice to name specific vendors in bills.

In his veto message, Ever wrote that while he has long advocated for increased state efforts to support literacy, such efforts “must be based on proven, evidence-based practices, and cannot be independent from discussions about the state’s obligation to provide meaningful, sustainable support for our classrooms and our schools.”

“I am vetoing this bill in its entirely because I object to fundamentally overhauling Wisconsin literacy instruction and intervention without evidence that more statewide, mandatory testing is the best approach for our students,” Evers added, noting that the bill also did not provide any additional funding for the program, causing schools to “strain their existing resources.”