By Laurel White, Wisconsin Public Radio - Oct 25th, 2021 10:35 am
Get a daily rundown of the top stories on Urban Milwaukee 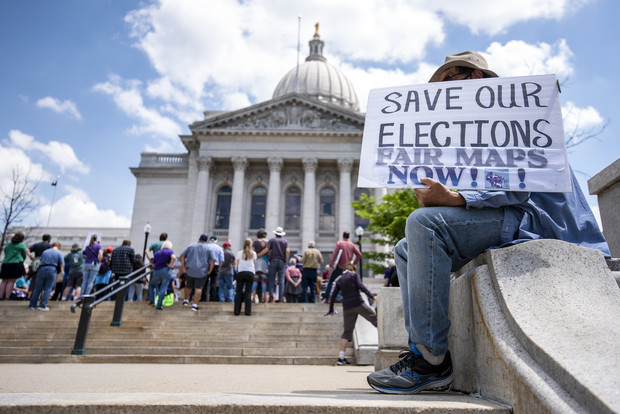 The Rally for Fair Maps demonstration at the state Capitol on Monday, May 17, 2021, in Madison, Wis. Angela Major/WPR

Wisconsin’s most competitive congressional district would be easier for Republicans to win under a political redistricting plan unveiled last week by GOP lawmakers. The plan would also add to Republicans’ advantage in state Senate districts outside Milwaukee, according to redistricting analysts.

For years, Democrats have decried the current maps — which were drawn and signed into law by GOP-controlled state government in 2011 — as a partisan gerrymander that gives Republicans a disproportionate amount of power in a state that’s often narrowly divided between parties in statewide elections. A case over the maps went all the way to the U.S. Supreme Court.

Wisconsin’s 3rd Congressional District, which is located on the western side of the state, is the state’s most competitive congressional district. Democratic U.S. Rep. Ron Kind, who has served in the district for more than 25 years, won his last reelection bid in 2020 by less than 3 percent of the vote. Kind is not seeking reelection in 2022.

The new map unveiled by Republican state lawmakers last week would take the city of Stevens Point, an area that favored Kind in 2020, out of the district — a likely bid to make the area more winnable for Republican candidates over the next 10 years.

Mark Gaber is the senior director of redistricting at Campaign Legal Center, a nonpartisan group that analyzes maps and has challenged Republican-drawn maps in court. He pointed out that during 2011’s Republican-driven redistricting, Stevens Point was moved from the 7th Congressional District, which reaches into northern Wisconsin, into the 3rd District.

“Stevens Point is sort of being used as a football in the last two cycles to advantage whichever districts Republicans at the time think is going to help them the most,” he said.

An analysis by the Princeton Gerrymandering Project, a nonpartisan effort led by students and researchers at the university, gave Wisconsin’s congressional map failing grades for both partisan fairness and competitiveness. It projects Republicans would have a 52 percent vote share in the 3rd District under the new plan — still closely divided, but with an edge for the GOP.

“We find that (the proposed maps) give Republicans a significant advantage in future elections,” said Adam Podowitz-Thomas, senior legal analyst with the project.

The Princeton Gerrymandering Project also gave failing grades for partisan fairness to the Legislature’s proposed maps for state Senate and state Assembly districts. Their analysis projects Republicans would hold their 22-11 majority in the Senate and retain a smaller but still sizable 59-40 majority in the Assembly.

“The choice to continue to draw maps that favor Republicans so heavily is clearly a partisan move,” Podowitz-Thomas said.

A Campaign Legal Center analysis was also sharply critical of the proposed maps for the state legislative districts, arguing the maps fall short in the number of measures of fairness, including whether some votes are “wasted” by many Democratic voters being “packed” into a few districts.

Gaber, of the Campaign Legal Center, argued the new redistricting plan includes changes to some state legislative districts in suburban Milwaukee, because those areas have become more competitive over the last 10 years. In Waukesha County, for example, votes for the Republican presidential candidate declined 7 percentage points between 2012 and 2016.

“And it appears as though an attempt is being made here to bring those districts back (as Republican strongholds),” he said.

According to the Princeton analysis, partisan edges appear to have been increased in the state’s 5th Senate District and 8th Senate District, which are currently held by Republican Sens. Dale Kooyenga and Alberta Darling. Kooyenga won his seat in 2018 with 51 percent of the vote and Darling won in 2020 with 54 percent. The analysis projects the district’s GOP vote shares under the new map to be 53 and 56 percent, respectively.

A redistricting commission created by Democratic Gov. Tony Evers released its first set of proposed maps late last month. Those maps would have also retained the Republican majority in the state Legislature, though it would be smaller. Following criticism that the first set of maps didn’t adhere to federal Voting Rights Act requirements for minority representation, a new set of maps was unveiled Wednesday.

Republican leaders in the Legislature said they took the commission’s first set of maps “into account” when drafting their own proposal. Evers urged lawmakers to accept the commission maps as the official starting point for the state redistricting process, which Republicans have refused to do.

Lawmakers are scheduled to have a public hearing on the Legislature’s map proposals Thursday at the state Capitol. Assembly Speaker Robing Vos, R-Rochester, has said he expects the maps to be approved by the full Legislature before it ends its fall session Nov. 11.

After lawmakers’ approval, the maps will be sent to Evers’ desk, where he is expected to veto them. That would send the mapmaking process to the courts, where state and federal lawsuits are already pending. Courts have handled the state’s maps numerous times over the past several decades, when there was split-party control in Madison.