The MSO Is Back and Captivates in New Hall

The Milwaukee Symphony Orchestra is back with a performance of contemporary and classic pieces. 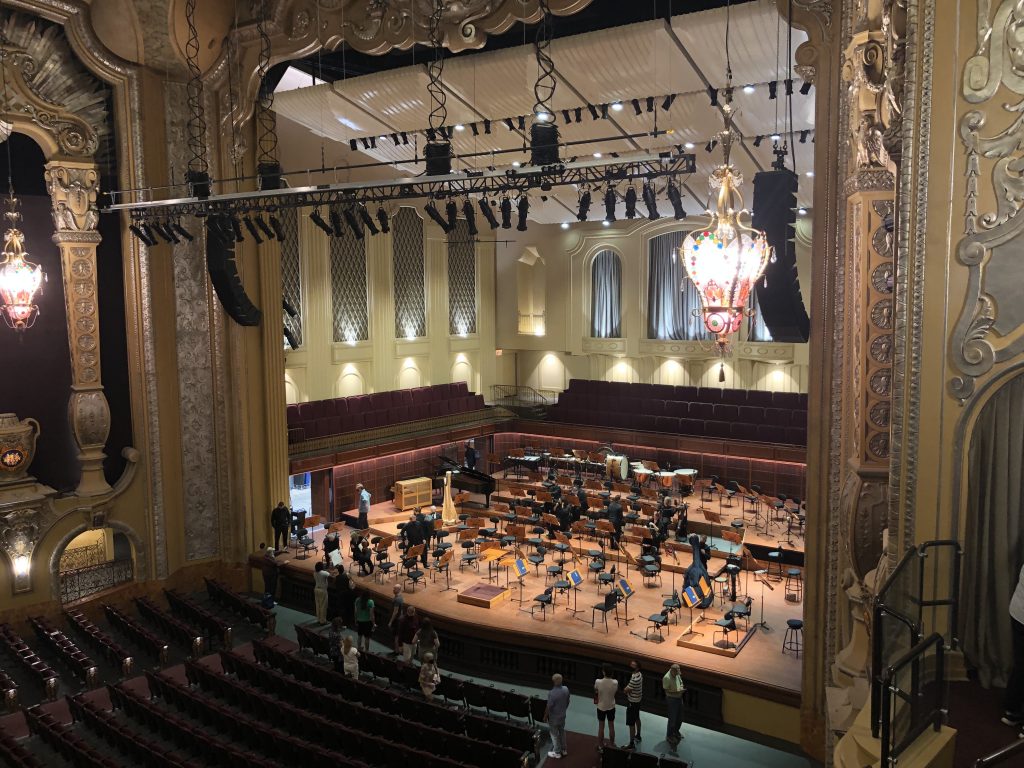 It’s good to be back. After missing the Milwaukee Symphony Orchestra’s season opener, I attended the Friday performance of the second program. I was immediately captivated by the new Bradley Symphony Center, with touchless ticketing and elegant new signage that guides attendees to the concert hall. The hall itself is spectacular. It’s a triumph of restoration and engineering that will be a source of Milwaukee pride for years to come.

First up was “Aeriality”, by Icelandic composer Anna Thorvaldsdottir. Her score was a feast for the ears, with quiet winding woodwind lines tickling the ear and sustained pitch centers building anticipation. According to the program note, the hazy, tenuous soundscapes were meant to portray the feeling of gliding through air. In this new performance space, every detail was audible. Eventually the music blossomed into warmth before sinking back toward an arresting coda where it petered out into white noise. During the applause, Maestro Ken-David Masur gave fist bumps to the first chairs, rather than the customary handshakes. It managed to be both a signal of safety, and modernity befitting the piece.

It managed to be both a signal of safety, and modernity befitting the piece, as if to say, “We just did something really cool!”

Next up was Bruch’s Violin Concerto, a staple of the romantic repertoire, played by former concertmaster Frank Almond. Unfortunately there were some problems. Mr. Almond sounded rocky and insecure in the opening cadenza. He was better in the lyrical second theme, with a richer tone and nice projection. But for the rest of the first movement, much of the passagework was undefined and chordal sequences came off rough. In the second movement, Almond recovered and his famous Lipinski Stradivarius sang out tenderly and confidently. As the movement progressed I thought about how this piece’s direct, straightforward expression speaks right to the heart, with very little compositional fuss. For the finale, Almond again encountered some technical issues. The main theme sounded scratchy. Some passages were rushed, and sometimes he held back, not projecting fully as a soloist. He still received a standing ovation, and it’s clear that the Milwaukee community appreciates his decades-long service to the orchestra and other musical projects. But his performance was simply not at the level of quality I expect from this organization, especially in a piece which many talented high school violin students can play with competence.

After intermission we were treated to Rachmaninoff’s Symphonic Dances. The composer’s last piece is one of his most unique, with an extended solo for alto saxophone and sometimes questionable application of the title “dance.” I enjoyed the first movement’s cinematic opening (it always evokes a horse ride through snowy forests for me), and the woodwind-featured slow section with the alto sax was gorgeous. I also loved the winding down of the melody in the low strings and low winds, one of Rachmaninoff’s signature sounds. The final statement of the main theme created a vivid, twinkling moment.

The second movement of this set is the most straightforward dance, with a recognizable oom-pah in triple time. But the emotional tone is strange, somewhere between bittersweet and grotesque. The woodwinds continued to excel, transitioning seamlessly as they traded solos. In the blooms of complicated sentiment, Masur restrained the group just enough so that they felt poised to break out at any moment. He also made sure that every little brushstroke was accounted for in each iteration of the main theme, every little trace of this movement’s anxious energy. The biggest climax showed the volume capabilities of the new hall: HUGE.

The orchestra blazed powerfully in some of the more intense moments in the third movement, less a dance than an episodic adventure between whimsy and impending fate. The lugubrious middle section recalled Rachmaninoff’s earlier tone poem Isle of the Dead. Sometimes it seemed like the composer was throwing every last idea onto the page. But Masur navigated the interpretive challenges confidently to the final bang. Overall I was impressed with this performance. The second movement in particular was delightful to hear live.

The Thorvaldsdottir and Rachmaninoff pieces seemed to acknowledge our collective mix of anticipation and dread. We have felt adrift in an endless era of isolation, safety protocols and empty streets. Occasionally there were glimmers of hope as we asked ourselves, “Is it safe to visit my friends now? Is it safe to travel? To go to a concert?” And now we’re making progress but there’s a long road ahead, because we’ve forgotten how to dance.

I absolutely recommend that any fan of music come to a concert in this new space and experience an authentic orchestral sound. It’s glorious. Since March 2020, the whole enterprise of public performance has felt fragile, in danger of slipping away. Now it’s back; come enjoy it.

One thought on “Classical: The MSO Is Back and Captivates in New Hall”