The Organ Trail Runs Through Milwaukee 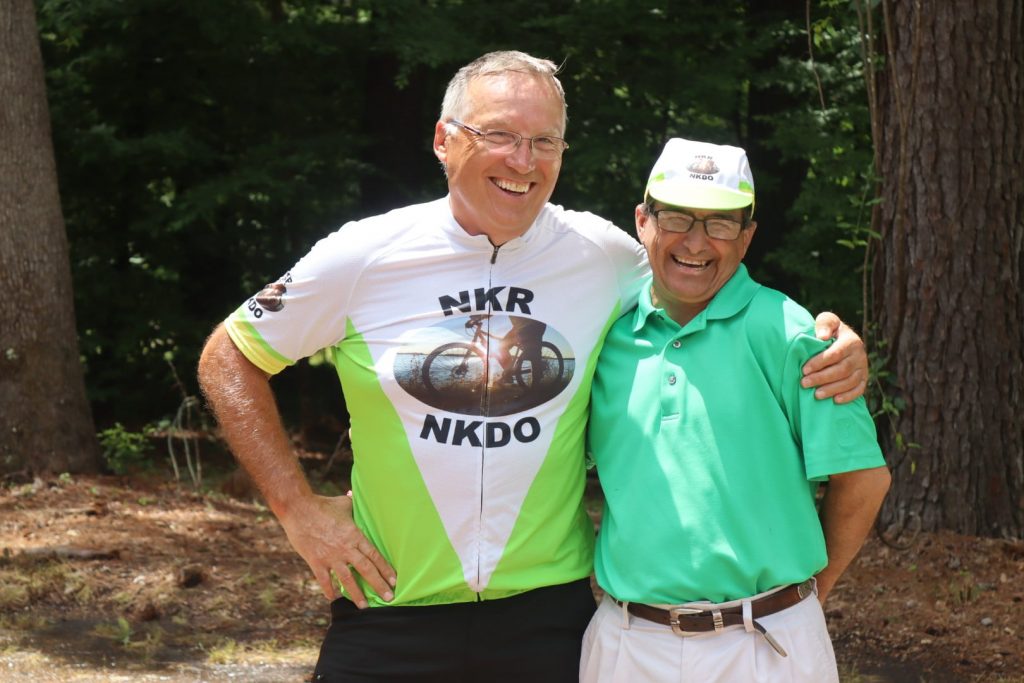 Mark Scotch and Hugh Smith. Photo from the Organ Trail.

A guy walks into a bar and leaves with only one kidney.

It’s not the start of a bad joke, but instead the serendipitous story of how Mark Scotch, my maternal uncle, and Hugh Smith met.

Scotch, while on vacation with his wife Lynn, met Smith at Cane River Brewing Company in Natchitoches, LA. After striking up a conversation, Scotch would learn Smith, a retired jockey, was experiencing stage five kidney failure and spent many hours each day hooked to a dialysis machine.

“I told him ‘I can you give one of my kidneys,'” said Scotch, recounting a story that has quickly become a piece of family lore. And so he did.

In less than two years, Scotch has gone from being a guy with two healthy kidneys and a weird penchant for endurance events to a 65-year-old that gave a kidney to a stranger he met in a bar and is now biking across the country to encourage others to do the same.

Scotch, a resident of Plover, WI, met Smith in February 2020. The actual donation took place that September, but not directly between the two. Scotch, via a hospital in Madison, was a “voucher donor” with his kidney going to an individual in New York. Smith, using Scotch’s voucher to receive priority treatment, received his kidney in February from someone in California.

Then the Organ Trail was born. Scotch would go visit Smith in Louisiana, via bicycle. Along the way, he would attempt to raise awareness of the need for living donors and organ donation. “I just didn’t realize that 13 people die every day because they don’t get a kidney,” said Scotch on Tuesday. “That just struck me.”

Get a daily rundown of the top stories on Urban Milwaukee
The idea of biking 1,500 miles seems insane to most, but Scotch has a habit of doing things that normal people quickly dismiss (beyond kidney donation to strangers). He’s finished the Arrowhead 135, a 135-mile, snow-covered race through northern Minnesota, six times using either a bicycle, skis or kicksled.

The donor and recipient were reunited in May after Scotch spent almost a month following the Mississippi River south. Friends and family joined him along the way, offering encouragement to both Mark and his wife Lynn, who drove along in an essential support role. The whole process was documented on The Organ Trail website, including many media appearances and visits to hospitals.

Then Scotch decided to do it again.

He set off Sept. 19 from Martha’s Vineyard in Massachusetts, passing through New York City, Buffalo, Cleveland and Toledo before arriving in Wisconsin on Tuesday, Oct 12.

Mark and Lynn rolled off the Lake Express ferry Tuesday morning to cheers from St. Thomas More high school students and a couple dozen other friends and family members.

Scotch was greeted by kidney recipient Judge Derek Mosley, as well as Senator Chris Larson, Representative Jonathan Brostoff and an aide to Supervisor Ryan Clancy before discussing his trip with area television stations.

After a few hugs were given, Scotch, with three friends and a reporter in tow, was back on his bike and headed towards the transplant center at Froedtert Hospital.

The 11-mile ride, much of which was on the Hank Aaron State Trail, ended at the front door to Froedtert with doctors, nurses and other hospital employees greeting Scotch with rounds of applause.

After a bike ride to Downtown, Scotch ended the day with a 20-mile ride to Cedarburg.

The second Organ Trail, a 1,600-mile trip, is scheduled to end Saturday in Plover.

“I wanted to demonstrate that a fat old guy can still ride a bike for a month straight with one kidney and do it so other people can see that and say ‘hey, maybe I can do something too,’” said Scotch. 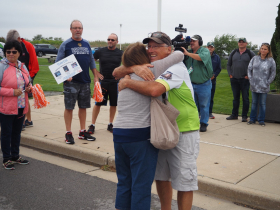 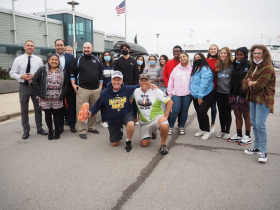 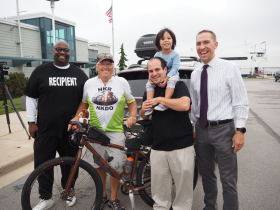 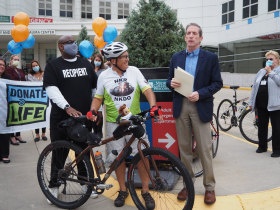 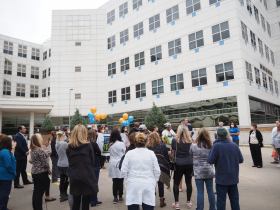 One thought on “The Organ Trail Runs Through Milwaukee”