Wisconsin is Double the National Average for Child Lead Poisoning

By Isiah Holmes, Wisconsin Examiner - Sep 30th, 2021 02:43 pm
Get a daily rundown of the top stories on Urban Milwaukee

A new study on lead levels in the blood of children found Wisconsin is one of six states where levels are more than double the national rate. The study, conducted by a national clinical lab and published through the Journal of the American Medical Association (JAMA) pediatrics network, examined over a million children younger than 6 in all 50 states. The children had their blood tested between Oct. 1, 2018 and Feb. 29, 2020.

More than half of the children included in the study, from 24 different states, had detectable lead levels in their blood. While the national rate was 1.9%, the study found a rate of 4.3 % in Wisconsin. The study highlighted that “no safe level of exposure to lead has been identified.” As far as the study’s authors could tell, this is the first study of its kind that includes individual and community-level factors. 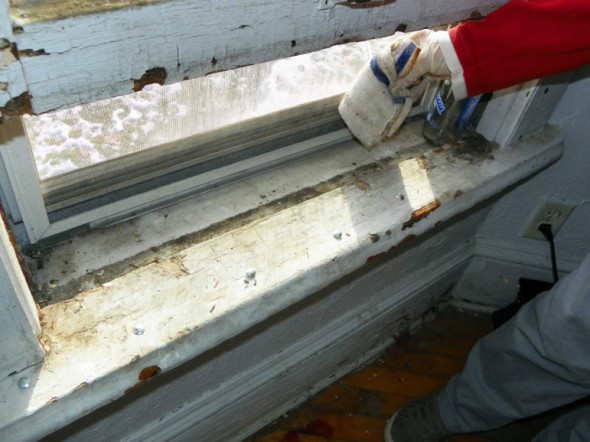 Old, peeling lead paint, seen in this windowsill in a rental property in Milwaukee. Photo by Matt Cambell of the Wisconsin Center for Investigative Journalism.

Lead exposure causes a variety of side effects, especially in young children. According to the Centers for Disease Control and Prevention (CDC), lead can damage the developing brain and nervous system. “Even low-level lead exposures in developing babies have been found to affect behavior and intelligence,” the CDC warns. And while the study found children in Wisconsin to have lead levels at more than double the national rate, the actual numbers could be even higher. According to the Department of Human Services (DHS), the number of Wisconsin children tested for elevated blood lead levels decreased by 75% in April 2020, compared to the prior year.

Beyond the raw rates of lead-blood levels in children, the study also analyzed community trends associated with higher levels. In addition to demographic information like race, ethnicity, and geographical regions, the study used pre-1950s housing as a key exposure factor. The study found that poverty was an associated factor. Among the results it found that “children residing in zip codes with predominantly Black non-Hispanic and non-Latinx populations had higher odds of detectable BLLs.” The study concluded that “despite progress in reducing pediatric lead exposure, substantial individual-and community-level disparities persist.”

At other points the study stressed the association between high lead blood levels and social, economic and ethnic disparities. “Children living at or below the poverty line in older housing or in communities with high concentrations of poverty are at the greatest risk of the toxic effects of lead,” the study found. “In addition, low socioeconomic status places children at increased risk of nutritional problems. For example, iron deficiency has been associated with a 4-to-5-fold increase in baseline risk of harm from lead because of increased absorption of lead by the divalent metal transporter in the gastrointestinal tract.” It added that less is known about some factors associated with high lead blood levels, “or whether particularly community-level factors can be identified to refine strategies for the primary prevention of exposure to the toxic effects of lead.”

Although lead poisoning in children can be found throughout Wisconsin, many cases are densely concentrated in the southeastern portion of the state. A 2016 DHS report found that the cities of Milwaukee, Watertown, and Racine, along with seven counties, had rates higher than the state’s overall average. Those rates ranged from 5.1% to 10.8% with the state’s rate at the time holding at 5.0%. The city of Milwaukee, where 69.4 %of the state’s Black population lives, was the only jurisdiction that reached that high 10% range. According to DHS, nearly 90% of the state’s Black population lives in southeastern or southern Wisconsin.

Between 2017 and 2020, the city of Milwaukee reports it has replaced 3,881 lead lateral lines, with 439 having been replaced in 2021. Over the last two budget cycles, however, Wisconsin Republican elected officials have refused to approve plans by Gov. Tony Evers to expand efforts to replace lead laterals statewide. When rejecting lead removal funding in 2019 Republican officials said it was too expensive, and that too much of the funds went to Milwaukee. The $40 million in funds would have gone to replacing about 9% of Wisconsin’s remaining lead laterals, according to Politifact. About 40% of the remaining residential lead lateral lines in Wisconsin are in Milwaukee.

The study also highlighted clear reasons why jurisdictions should want to solve lead poisoning. It stressed that, “if the US achieved BLLs of zero in U.S. children born in 2018, it would result in an overall benefit of approximately $84 billion during the lifetimes of these children. These projected savings are primarily the result of the expected increases in productivity among children who will be able to achieve their full potential ($77.2 billion).” The study’s authors did, however, concede that the study has some limitations. “BLLs in children residing in zip codes with predominantly Black or Hispanic and Latinx populations were not consistent,” it read. “Further studies are needed to characterize these associations.”

It stressed the importance of focusing on exposure in children in any strategy of combating lead poisoning. “To eliminate the effect of lead exposure on all children’s health,” it emphasized, “the U.S. must focus efforts to prevent children from being exposed to lead, beginning in areas where risk is highest. Children, families, and society achieve the most benefit from interventions that ensure that the U.S. mitigates lead exposures in homes and other settings before a child is ever exposed.”

Study finds Wisconsin has double the national rate for child lead poisoning was the originally published by the Wisconsin Examiner.