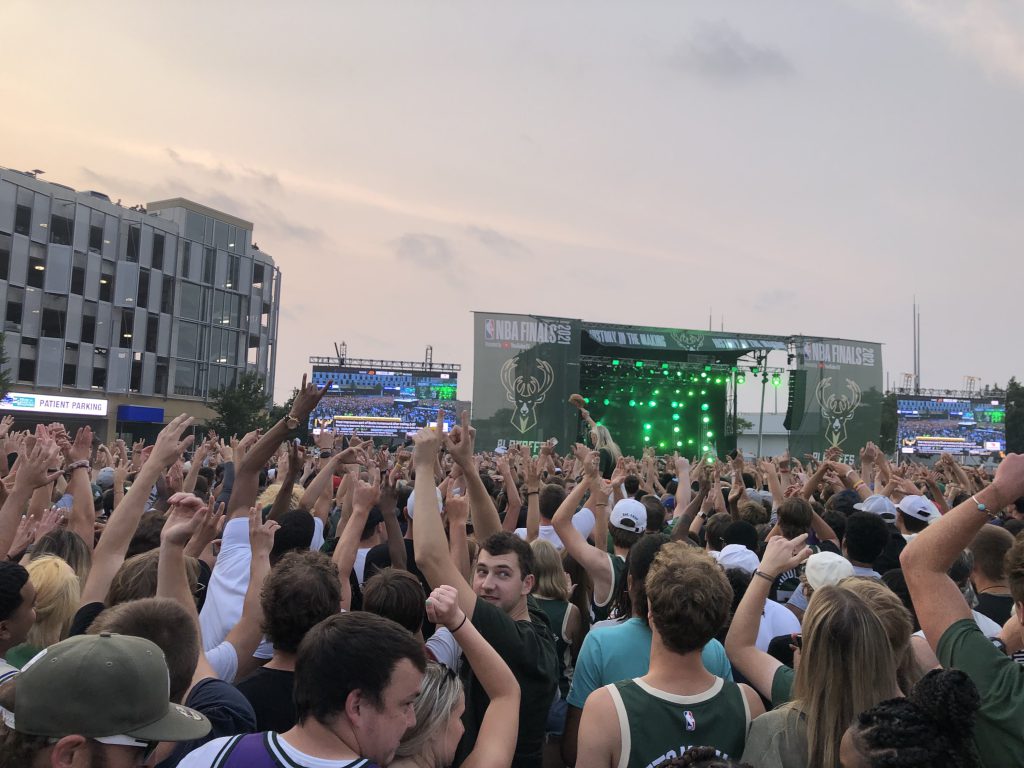 Fans cheer the Milwaukee Bucks in the Deer District. Photo by Jeramey Jannene.

While local businesses are hoping for a deep Milwaukee Brewers playoff run, VISIT Milwaukee is tallying up the benefits of the Milwaukee Bucks championship.

“We’re incredibly grateful that the Milwaukee Bucks’ fantastic run brought a vital boost to our economy,” said VISIT President and CEO Peggy Williams-Smith. “These dollars pumped much-needed life into many of the businesses that struggled the most during the pandemic, and they helped support thousands of jobs. I’m now hoping our beloved Milwaukee Brewers’ and their forthcoming post-season can do the same.”

Get a daily rundown of the top stories on Urban Milwaukee
The first-round series against the Miami Heat, which included two home games, generated only a $2.7 million economic impact.

Downtown hotel occupancy rates went from 52% during the Miami series (including non-game days) to 50% during the Brooklyn series, 52% during the Atlanta series and 64% during the Phoenix series (average daily room rate $143). VISIT said few other meetings and conventions took place during that time.

“The world now knows that Milwaukee is a city of champions and that excitement clearly resonated with thousands of local fans and visitors. Whether through special promotions, signage, watch parties, and more, I’m so proud of the way our community showed up to welcome all those who came to experience a game in the Deer District,” said Williams-Smith.

The report estimates the Bucks generated $1.11 million in “local” tax revenue. But because of Wisconsin’s bifurcated government financing structure, little of that revenue will directly end up going to the City of Milwaukee. Most sales tax revenue is retained by the State of Wisconsin, while the city relies on property tax revenue. The Wisconsin Center District and VISIT Milwaukee are funded by a mix of hotel, rental car and food and beverage taxes.

The Bucks playoff run put Milwaukee on a world stage, as VISIT’s press release notes, with images of the team, city and jam-packed Deer District being shared widely. But the economic impact of the months-long playoff run was still less than the $200 million impact once estimated for the 2020 Democratic National Convention. Because of the pandemic that event ended up being mostly virtual.

A pandemic-delayed event, the 2020 Ryder Cup, took place last week in Sheboygan. The event, for which no report is immediately available, clearly had a spending impact on Milwaukee though it wasn’t held in the city. Buses could be spotted outside of hotels every morning to shuttle guests to the event, while in the afternoon helicopters would transport some guests to Milwaukee Mitchell International Airport and in the evening people could be spotted walking the street in Ryder Cup apparel.