By Isiah Holmes, Wisconsin Examiner - Sep 26th, 2021 12:00 pm
Get a daily rundown of the top stories on Urban Milwaukee 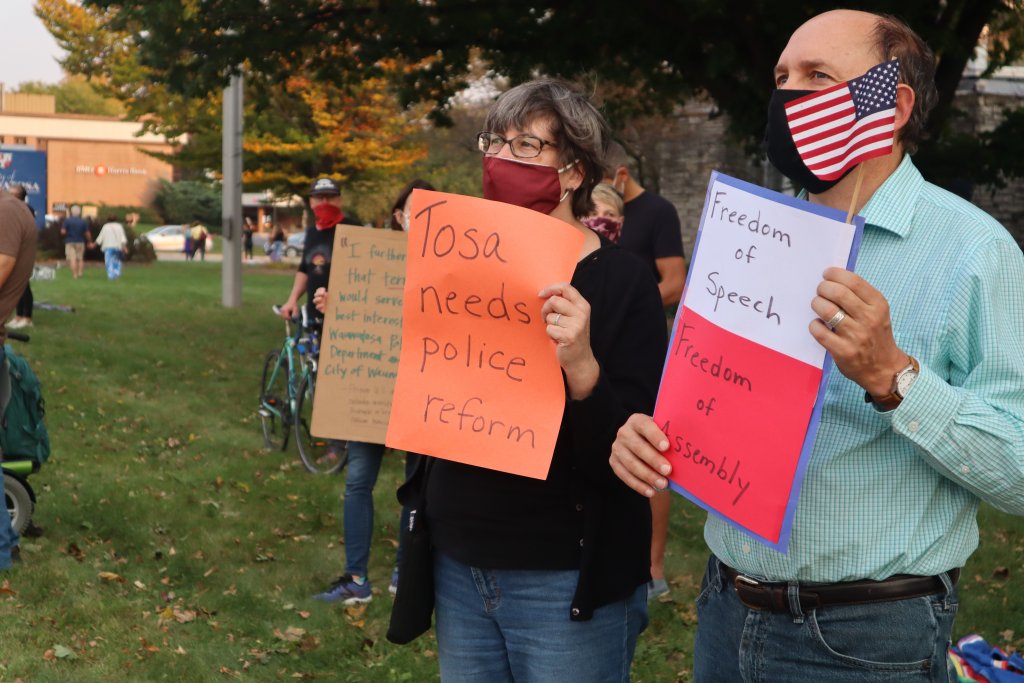 Recently, the Wisconsin Examiner learned that a detective who created a PowerPoint presentation which labeled Wauwatosa’s mayor as a “higher value target” was promoted after an internal investigation of the matter was completed. The PowerPoint, which was obtained through open records requests in January, shone a light on how police viewed those who supported protests against police violence in 2020.

The document was created by Joseph Lewandowski, who at that time was a detective at the Wauwatosa Police Department (WPD) assigned to WPD’s Special Operations Group.  The unit has several functions including conducting covert surveillance and extracting data from seized phones. Lewandowski used the PowerPoint for an in-house briefing with two WPD supervisors, according to an internal investigation. The subject of the briefing was an incident in which a gun was fired during a demonstration outside the home of former police officer Joseph Mensah.

The presentation identified four individuals as “higher value targets” for the department. Among them was Mayor Dennis McBride, who the presentation said supported the protests. Though McBride wasn’t connected to the August incident the slide read, “no PC for Mensah shooting … yet,” referring to probable cause. Others were also either listed directly as or in association with the so-called “higher value targets.” A month later, during Wauwatosa’s curfew, then-Detective Lewandowski disparaged McBride and attorney Kimberley Motley—who’s mentioned among the slides—during an interrogation of an arrested protester.

Although his supervisors were aware of the PowerPoint’s existence, an internal investigation wasn’t launched until the Wisconsin Examiner’s first report. The investigation itself was completed by February, though it wasn’t finalized by the out-going Chief Barry Weber until March. Lewandowski was found to be in violation of department policies around obscene or defamatory language, and professional image. A written reprimand was placed in his file.

The investigation concluded that Lewandowski was “embarrassed by the distraction this information caused and understands the gravity of the situation.” However, the investigation did not take into account Lewandowski’s comments during the interrogation. It also claimed that WPD “did not conduct any investigation into Mayor Dennis McBride,” but didn’t include other reports Lewandowski authored on McBride’s “questionable conduct” and his contact with protesters.

The investigation acknowledged that the PowerPoint was of investigative relevance, and that all of the “higher value targets” should have been referred to as “prominent people.” The report was finalized on March 1. On April 6, a little over a month after the investigation ended, Lewandowski was promoted to sergeant.

He was also moved out of the investigative division and was reassigned to the patrol division. Weber retired after over 30 years as WPD’s chief on June 1. In late July, former Milwaukee PD captain and Wauwatosa-native James MacGillis took over as chief. Besides Weber, 14 other WPD staff members resigned or retired from the department between July 2020 and June 2021, about 11% of the department.

Among those who left were two captains–including one who was involved in the internal investigation–a lieutenant who became a regular face during WPD’s protest enforcement actions, a detective, six officers including Joseph Mensah and two others who were still on probation, a parking specialist, a desk clerk, a dispatcher, and a station support employee. Lewandowski remains employed at WPD, and is now nearing 20 years at the department.

Detective who labeled Wauwatosa Tosa mayor a “higher value target” is now sergeant was originally published by the Wisconsin Examiner.