Has Homelessness Declined In Milwaukee? 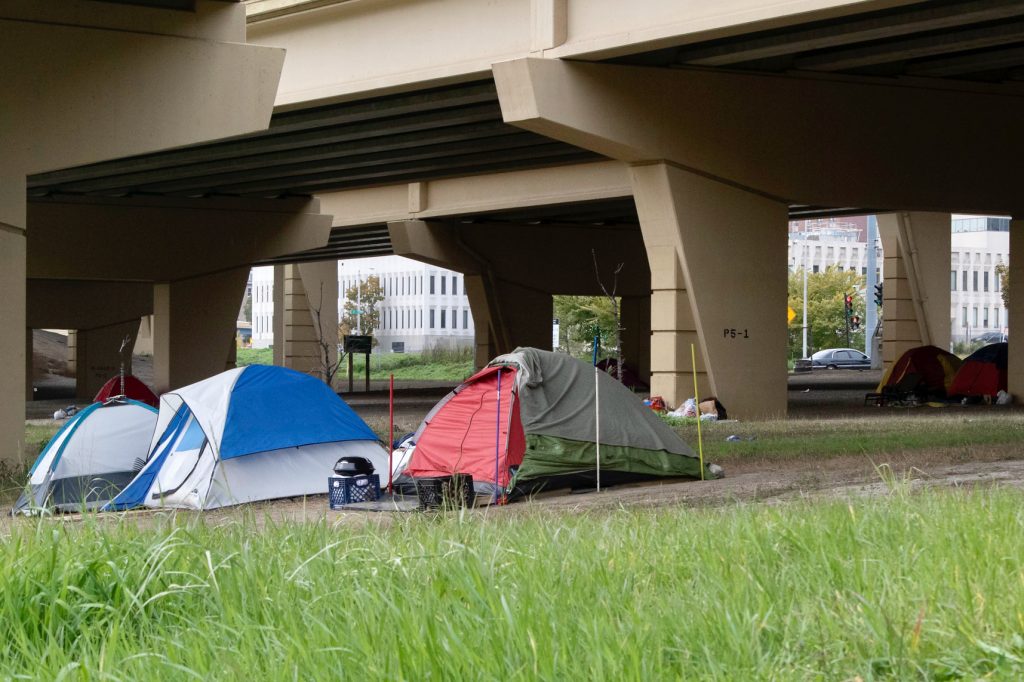 Milwaukee’s homeless residents often set up tent camps underneath the Marquette Interchange. This photo was taken in 2018. NNS file photo by Max Nawara.

Volunteers, homeless care provider staff and homeless advocates conduct the count in one night in January by going out in teams to document the number of people they see sleeping outside.

This year, they counted 17 unsheltered individuals. In 2020, the number was 87 and the year before that the number was 114, according to data provided by the Milwaukee Continuum of Care.

The Milwaukee Continuum of Care is a coalition of local agencies that advocates for people experiencing homelessness.

In a news release in June, city and county officials said the count “saw the sharpest decrease to date of individuals staying in unsheltered settings.” They attributed the low number to expanded street outreach, the use of CARES Act funding for additional permanent housing, efforts to reduce evictions, emergency hotel placements and allowing Clare Hall to be used for temporary shelter.

But the National Law Center on Homelessness & Poverty stated in a report that these types of visual street counts are often inaccurate primarily because people need to be seen in order to be counted and people facing homelessness are not always visible.

‘Hiding during the winter’

Eva Welch, the co-founder and director of Street Angels, a Milwaukee nonprofit that helps feed, shelter and advocate for those facing homelessness, said she’s noticed the same issue with the count.

“The Point-In-Time count only happens once a year in the middle of January,” she said. “People living on the streets are hiding during the winter.”

Welch said Street Angels keeps its own database to track people living on the streets, adding her group’s street outreach team has been seeing an average of 150 people a night.

In addition, Sister MacCanon Brown of the MacCanon Brown Homeless Sanctuary said the number of people her organization serves has tripled. She estimates the sanctuary helped from 80 to 100 individuals each time it was open during the last year.

Another provider, Lyn Hildenbrand, the executive director of the Gathering, a meal program, said she saw a slight decrease in people coming to get meals in the beginning of the summer. But she added that number is now going back up to about 100 people a day for the group’s breakfast program.

All three women, however, acknowledge that homeless prevention efforts have helped.

Emergency hotels, which at their peak housed from 190 to 195 individuals experiencing homelessness a night, played a large role in achieving the lower numbers, said Rafael Acevedo, the grant compliance manager for the City of Milwaukee. They allowed shelters to comply with new capacity limits because of COVID-19 and provided space for people to isolate themselves when needed.

He said there are still about 100 people being housed in hotels: “Now the goal is to get people out of the hotels and into housing.”

Welch, Brown and Hildenbrand express fear of what will happen once homeless benefits run out. Many of these benefits, like rental assistance, have received and continue to receive funding that’s meant to last through 2022.

“We’re planning for the worse and hoping for the best,” Hildenbrand said. “If we’re already seeing more people needing us what will happen when all of these benefits stop?”

Acevedo believes that moving people from hotels to housing will be possible because the city has more federal funding to help.

“We have the aid to help people put down a security deposit and possibly a few months of rent,” Acevedo said.

“The silver lining of this pandemic was that it allowed us to make great partnerships with both large and small local landlords,” he said. “We got to talk to them and understand that they don’t really want to evict.”

Here’s how you can help

1. “You can support the organizations that make up the Milwaukee COC,” Acevedo said. These organizations include Community Advocates, Guest House of Milwaukee, Hope House Outreach Community Health Center and many more agencies.

2. “Talk to your local officials,” said Welch. “We’re never going to get necessary shelters if policymakers don’t know that homelessness is an issue.”

3. Both the MacCanon Brown Homeless Sanctuary and the Gathering are searching for volunteers.

4. If you need housing assistance, you can seek help through rent assistance programs being administered by Community Advocates and the Social Development Commission. You should reach out to the Rental Housing Resource Center, or RHRC, for other housing issues. Officials can be contacted at info@renthelpmke.org or 414-895-RENT.

A count says homelessness has significantly dropped in Milwaukee. Those on the frontlines see a different trend was originally published by the Milwaukee Neighborhood News Service.

One thought on “Has Homelessness Declined In Milwaukee?”