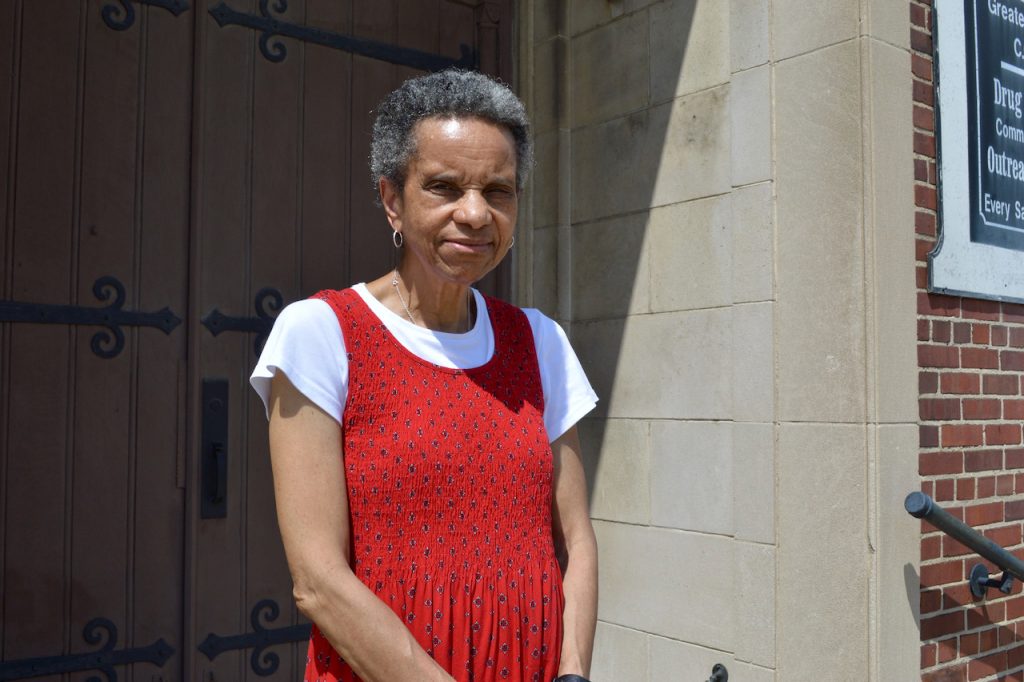 “Once they see that their voice mattes, they’re more emboldened to be active,” Sister Patricia Rogers says of Amani residents. Photo by Ana Martinez-Ortiz/NNS.

Sister Patricia Rogers, 72, believes in the power that comes from having high expectations for people.

As a child, she grew up in Arkansas, where her mother was an active member of the NAACP and fondly dubbed “the Rosa Parks of Fort Smith.” Rogers and her siblings would often attend protests and carry picket signs. In high school, Rogers’ involvement increased.

The NAACP called Rogers’ mother and asked her if the family would help integrate a local high school. During her senior year, Rogers, along with seven other Black students, attended the local white high school.

“It was nothing like the Little Rock Nine,” Rogers said. “We didn’t have people outside the school protesting or anything like that. The biggest thing was that they had no expectations whatsoever. Every teacher was surprised if we could do something.”

Two years later, the two high schools integrated, with the middle schools following shortly after. Her experiences integrating a school informed her later work, where she learned if she sets high expectations, people will rise to meet them.

Rogers retired in June after serving 10 years as executive director of the Dominican Center, a neighborhood organization that serves as an anchor in the Amani neighborhood and focuses on housing, safety, economic development and other initiatives.

Under her leadership, the center is credited with addressing community needs by hosting neighborhood cleanups, mobile food pantries and the resident-led Moody Park revitalization, among other projects.

This week, the center announced that Maricha M. Harris, a Milwaukee native, will succeed Rogers as executive director. Previously, Harris worked for Safe & Sound, where she managed the day-to-day operations of the $2.5 million nonprofit.

In a news release that discussed her retirement, Rogers said:

“Through honesty and hard work, we learned to trust the other and a lifetime bond was developed. Parting does not always mean goodbye. I am sure we will find ways to stay connected because we share a heart.”

‘God, you have the wrong number’

Rogers was teaching at a Catholic school in Chicago when she had a dream.

At the time, the school had several African American teachers, a mostly white staff consisting of white sisters and a predominately Black student population. There were no expectations for the students, Rogers recalled, and some would often show up in house slippers with rollers in their hair.

Rogers said she kept asking God to send some Black sisters to the school.

One day, Rogers wasn’t feeling well, so she stayed home. As she slept, she had a nightmare that the oven was on fire, and a voice spoke to her, saying, “What about you?”

“Instinctively, I got up, because I knew what the question was about,” Rogers said. “I got up and went to the phone book. I looked in the phone book, and there was five other Patricia Rogers listed, and I said: ‘God, you have the wrong number.’”

Rogers, who had grown up Episcopalian, had never thought about being a sister. And she’d never seen a Black one.

Despite her apprehension, Rogers made a deal with God: If the sisters accepted her, she would become one. But if not, she had tried her best.

Staying on the stage

The Dominican Sisters of Sinsinawa did accept her, and through them, Rogers worked in various cities throughout the country, including in New Orleans when Hurricane Katrina occurred.

Although Rogers offered to stay with the Sisters of the Holy Family and help it rebuild a school, she was instead offered the position of executive director of the Dominican Center.

“The stage was set,” Rogers said. “My job was not to fall off the stage.”

Moody Park, for example, had been an eyesore for years, Rogers said, and when the county made plans to restore it, residents made their voices heard.

“Once they see that their voice mattes, they’re more emboldened to be active,” Rogers said.

Rogers appears to be quiet and reserved, but she is open and ready to assist, Smith said. When Amani United began its revitalization program, community partners would turn to Rogers, who, in turn, steered them toward the residents, Smith recalled.

“She wants the residents to tell their own story because this is not where she resides, it is where she’s employed,” Smith said.

When Rogers gives someone a task, she equips them with the necessary tools, Smith said. It was Rogers’ belief in her skills that encouraged Smith to get more involved in the community.

“Sometimes, it’s just her voice and her stature that gives me the assurance,” Smith said.

Although Rogers has retired, she said residents know if they need her, she’s only a phone call away.

As for Rogers, she’s pleased to see that other organizations are putting residents in the driver’s seat.

“People are getting that we have to listen first and then act with the people, not for the people, to get things done,” Rogers said.

LIVING LEGENDS: How Sister Patricia Rogers became a quiet force to be reckoned with in the Amani community was originally published by the Milwaukee Neighborhood News Service.