New bill could make it a felony to protest if there has been an act or threat of violence.

By Laurel White, Wisconsin Public Radio - Sep 17th, 2021 02:55 pm
Get a daily rundown of the top stories on Urban Milwaukee 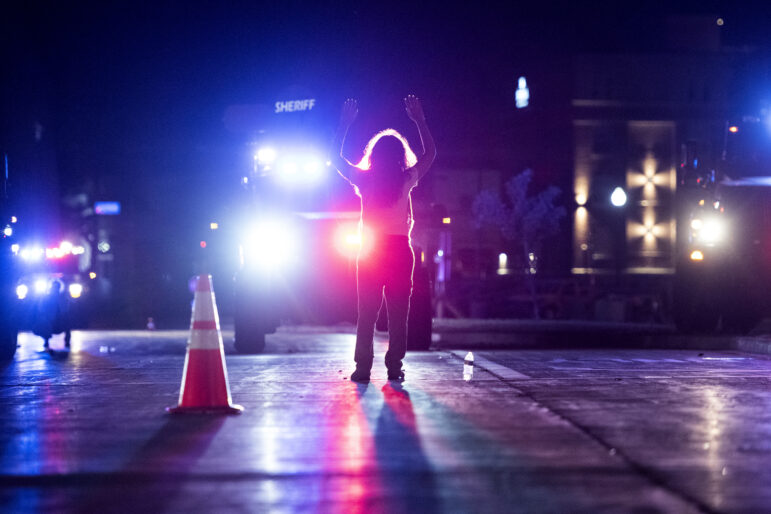 A protester stands in front of bearcats as people are cleared out of the area Wednesday, Aug. 26, 2020, in Kenosha. The protests were in response to police shooting and wounding Jacob Blake. Angela Major/WPR

Remaining at a protest that turns violent or destructive could result in felony charges in Wisconsin under a proposal from Republican state lawmakers.

Sponsors say the plan is partly in response to last summer’s violence and destruction in Kenosha following the police shooting of Jacob Blake. It would create a definition of “riot” in state law and impose new penalties.

Under the bill, a riot would be defined as an unlawful assembly of three or more people that includes an act or threat of violence by at least one person that poses a risk or would result in personal injury or property damage, or an act that “substantially obstructs law enforcement or another governmental function.”

During a public hearing on the plan Thursday, Sen. Van Wanggaard, R-Racine, a former police officer and one of the bill’s sponsors, said the plan “addresses the growing popularity of riots.”

“In the wake of recent disruptions both in our state and across the nation, it is important to focus on keeping the public safe and holding those responsible accountable,” Wanggaard said.

Supporters of the measure include the Wisconsin Professional Police Association and Wisconsin Sheriffs and Deputy Sheriffs Association. The only opponent officially registered with the Legislature is the conservative group Americans for Prosperity, which said in its official filing it has concerns the plan could have “a chilling effect on the lawful exercise of free expression” and that it “could be inappropriately applied by government officials in a partisan or otherwise biased manner.”

During Thursday’s hearing, Sen. Kelda Roys, D-Madison, raised concerns about the bill being overly broad, potentially leading to life-altering criminal charges for people who were in the wrong place at the wrong time.

“You are making people responsible for the acts of others,” Roys said.

She said the proposal “lends itself to real abuse of power by prosecutors through overcharging or by police who want to crack down on otherwise lawful protests.”

On Monday, Milwaukee’s Judiciary and Legislation Committee voted to lobby against the bill. At the time, city lobbyist Jordan Primakow told the committee the proposal could allow law enforcement officers to arrest massive amounts of people.

The bill has yet to be voted on in a state Senate or Assembly committee. If approved by the full Legislature, it could be vetoed by Gov. Tony Evers. The governor’s office didn’t immediately respond to a request for comment.

Wisconsin GOP Bill Would Create Felony Charges For Participating In A Riot was originally published by Wisconsin Public Radio.