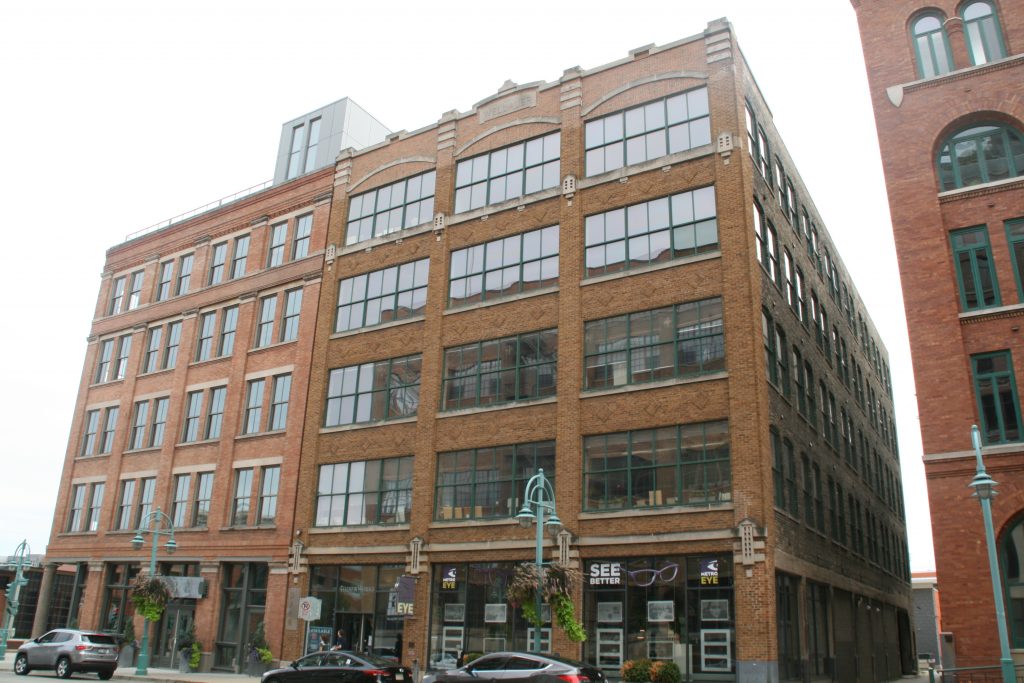 Boelter + Lincoln is on the move.

The advertising agency is leasing the full fourth floor of the five-story building at 325 E. Chicago St. in the Historic Third Ward.

“We are thrilled with the new office,” said the firm’s CEO Jill Brzeski in a statement. “It is a great blend of historic architecture with modern amenities and will provide an ideal launch pad for creativity and innovation.”

Known as the TimberWorks Building, the redeveloped warehouse includes high-beamed ceilings and exposed brick. The advertising agency will be leasing approximately 7,000 square feet of space.

Boelter + Lincoln was previously located on the fourth floor of the building at 222 E. Erie St.

The move involves a downsizing of about 2,000 square feet in the space leased by the firm.

Get a daily rundown of the top stories on Urban Milwaukee
“Our layout is much more efficient,” said firm partner and vice president Andy Larsen to reporter Sean Ryan. “We found out, like the rest of America, the concept of work-from-home was viable, at least in our industry. So we set it up to accommodate the fact that people will work from home more.”

Joe Lak Jr. and Jim Sedgwick of The Heimat Group represented Boelter + Lincoln in its lease. The landlords of the firm’s old and new office buildings are represented by Founders 3.

“We welcome Boelter + Lincoln to their new home at 325 E. Chicago Street. They will be a great addition to our roster of committed tenants in what we believe is the most vibrant neighborhood in the city,” said Steve Pape, managing partner of Revel Investments and a former principal with Founders 3.

Revel acquired the property in 2017 for $5.05 million. It was built in 1913 to the designs of R. Messmer & Brothers and leased to the Standard Bedding Co.. The cornice displays the name Wellauer, a likely reference to one of the largest wholesale firms in the neighborhood a century ago. 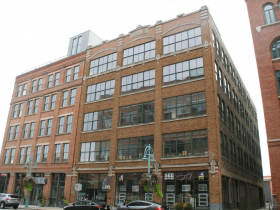 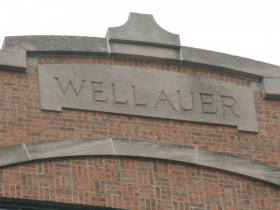 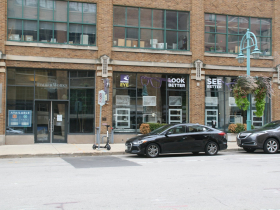 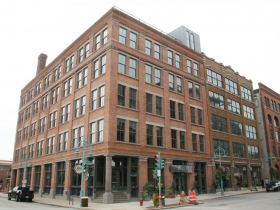 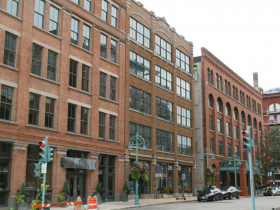 Western Contractors, on behalf of New Land Enterprises, is demolishing the 37,552-square-foot building at 1237 N. Van Buren St. that long-held a Buca di Beppo restaurant and a Bally Total Fitness gym. The restaurant closed in 2017, the final tenant in the building to depart. Built in 1978, the structure occupied the northern edge of an L-shaped, 1.3-acre lot that runs from N. Van Buren St. to N. Jackson St.

Little remains of the restaurant portion of the building after less than a month of demolition, unless you count the sorted piles of material atop the property’s surface parking lot. In the coming weeks, Western will finish off the gym portion of the structure. A raze permit on file with the city estimates the cost of the job at $280,000.

The Department of City Development is looking for a new owner for a movie theater at 2917-2923 N. Holton St., just north of W. Locust St.

Known as the Grand Theater, the building was constructed in 1911 and expanded to 850 seats in 1922. It was operated as a neighborhood theater until the 1970s.

But the seats eventually gave way to pews. It was owned and occupied by the Haven for Hope Ministries, but the organization lost the facility in property tax foreclosure in 2016.

In 2018 the Riverwest Investment Cooperative, a nonprofit group led by area residents, secured city approval to convert the facility into the Grand Imagination Theater with two stages.

But the organization announced in August 2020 that it canceled its plan because of the COVID-19 pandemic.

A Milwaukee housing nonprofit is one of 120 organizations awarded funds by the U.S. Department of Housing and Urban Development (HUD) to ensure landlords are conducting fair housing practices.

HUD announced Friday that the Metropolitan Milwaukee Fair Housing Council (MMFHC) will receive three grants totaling $999,149 for investigating and litigating complaints under the Fair Housing Act as well as education and outreach.

The grants are part of a $47.4 million allocation by HUD’s Fair Housing Initiatives Program.

Approximately half of the local funding, $499,149, will be used by the housing council to train similar organizations in other states.

Good City Brewing Will Donate 1% of Revenue to Housing

Good City Brewing announced Wednesday that it will contribute at least 1% of all company revenue going forward to housing initiatives in Milwaukee.

“Good City was born out of an intentional commitment Dan [Katt] and I made to put down roots and seek the good of Milwaukee. As we thought about how we can push forward our mission… as a company, we kept coming back to the importance of rootedness and calling a place home, keys to which are affordable housing and home ownership,” said co-founder David Dupee in a statement. “We’re excited to focus our efforts toward supporting the amazing local nonprofits who are making it easier for everyone to put down roots and call Milwaukee our home.”

The company, which operates taprooms on the Lower East Side, at the Deer District and in suburban Wauwatosa, made the pledge as part of an announcement that its lager-style Home beer would now be available in cans.

For the first time in its history, Milwaukee has a shared plan to create affordable housing.

The plan, released Tuesday, identifies four key areas for improvement and a series of targeted efforts for each. It’s designed to address both homeownership and rental housing and targeted at those making between $15,080 to $31,200 per year ($7.25 to $15 per hour). The plan also includes an explicit focus on addressing racial inequity.

In the metro area, white residents are twice as likely to own their home as Black residents and 1.4 times more likely than Latino residents. Due to lower incomes and/or living in older properties that can require more spending, more than 55% of renters and 31% of homeowners spend more than 30% of their household income on housing, a level the federal government and other agencies have labeled as “cost burdened.”