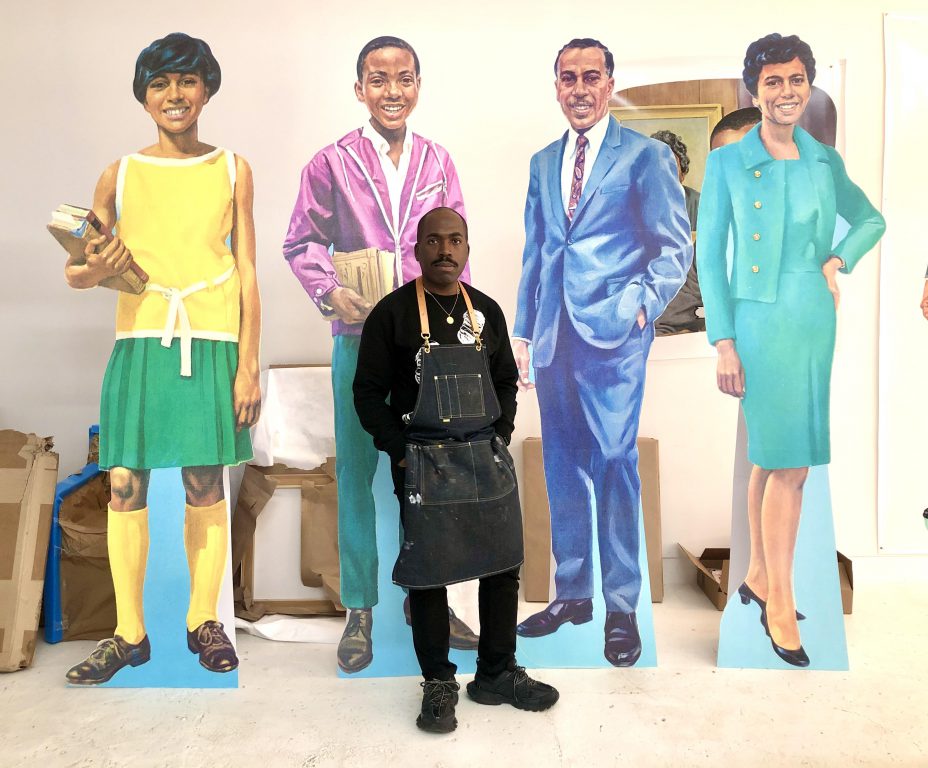 The Milwaukee Art Museum is unveiling a new mural Oct. 29 focused on commercial and social spaces of the past and present in Milwaukee’s Black community.

“The monumental wall mural includes references to important sites of Black culture in Milwaukee including Gee’s Clippers, Coffee Makes You Black and the Wisconsin Black Historical Society, combined with vernacular photographs from the civil rights movement of the 1950s and 1960s and dynamic figures that Adams created,” a press release from the Milwaukee Art Museum noted.

The piece is partly inspired by Victor Hugo Green’s The Negro Motorist Green Book, a traveler’s guide for Black Americans during the Jim Crow era published from 1936 to 1966. During this time, many Black Americans used the guide to help find travel locations that were friendly and safe.

In 2018, this history provided the background for the movie Green Book, which focused on a Black pianist’s tour of the deep South and won several academy awards.

Speaking of his mural, Adams said: “These dwellings, and those who occupy them, are essential to the cultural, political and creative growth of American society, which is then spread out to a global audience. The installation reflects my respect and admiration for the perseverance of Black Americans in their pursuit of happiness and speaks to transformation, belonging and normalcy.”

Adams is a Brooklyn-based artist who has worked in several different mediums and is especially involved with the way African American experiences intersect with art history, American iconography, and consumerism. Adams has received several awards for his work and his pieces permanently reside in The Metropolitan Museum of Art, The Studio Museum in Harlem and the Whitney Museum of American Art, among others.

Get a daily rundown of the top stories on Urban Milwaukee
For this piece, Adams visited Milwaukee in 2018 and 2019 to explore sites important to the Black community, such as the Wisconsin Black Historical Society. He also met with artists and business owners, while researching places and viewing local archives.

Adams said the archives are particularly crucial to Milwaukee because none of the historical Green Book sites still exist in the area.

The piece has generated a lot of excitement on Instagram, with more than 3,000 likes and several comments from notable names such as Swizz Beats, an American record producer and rapper, and several other artists.

“Our Time Together” is part of the museum’s On Site series and will be available to view through 2024 following the opening celebration Oct. 29 at 6 p.m.