Regulators reject charges of bias, while the utility seeks a new application and decision.

By Danielle Kaeding, Wisconsin Public Radio - Jul 30th, 2021 11:40 am
Get a daily rundown of the top stories on Urban Milwaukee 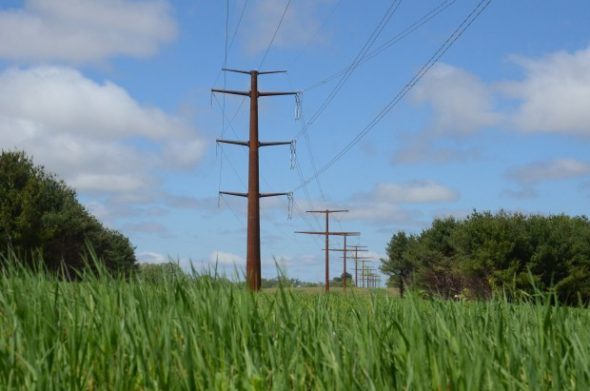 Towers similar to those above will be built as part of the Cardinal-Hickory Creek transmission line.
(Photo courtesy of American Transmission Company/ WPR)

State regulators are denying they were tainted or biased in their decision to approve a controversial transmission line nearly two years ago. Members of the Public Service Commission are defending their review of the Cardinal-Hickory Creek transmission line as the project’s owners are asking them to revoke that decision and file a new application.

The request follows the discovery of secret communications between officials linked to companies building the $492 million transmission line and former commissioner Mike Huebsch.

American Transmission Company, ITC Midwest and Dairyland Power Cooperative asked the PSC to file a new application after they discovered Huebsch regularly communicated with an ATC employee and former ITC independent contractor using the private phone messaging app Signal while the project was under review. The companies have said they want to refile an application to preserve integrity and transparency in the regulatory process. Huebsch was among three commissioners who unanimously approved the project in 2019.

PSC Chair Rebecca Cameron Valcq spoke defiantly against rescinding the order. She rejected claims from project opponents that she and Commissioner Ellen Nowak were tainted in their decision.

“I stand by our process. I stand by the fact that it was a really good record. It was really thorough, and I was not swayed one bit by Commissioner Huebsch. I also don’t believe he was biased in any way, shape or form,” said Valcq. “Any action to rescind or to sort of rehash old arguments to me, in my mind, it just undermines the confidence that I have in the record upon which I based my decision.”

Nowak also wouldn’t concede the process was tainted or that fellow commission members were biased in their review of the project. But said she felt it was in the public interest to rescind the order and reopen the case as a matter of efficiency, noting the companies have stated the project is time-sensitive in order for ratepayers to achieve savings.

“Should the court determine the bias allegations have merit, the resulting next steps would be exactly the same as what the applicants are asking for,” said Nowak.

Huebsch stepped down from the commission early last year.

Valcq and Nowak reached a standstill on the companies’ request and did not vote on the matter. The utilities have argued that rescinding the decision and voting again on the project’s existing record would make pending state court action moot and allow the project to move forward on construction.

Commissioner Tyler Huebner recused himself on the matter. Commissioners agreed to leave the issue open for possible consideration after an Aug. 5 court hearing regarding a request by the companies to halt legal proceedings.

The 102-mile transmission line that would run from Dubuque County, Iowa, to Dane County is at the heart of several lawsuits. The Wisconsin Wildlife Federation and Driftless Area Land Conservancy are among groups suing the PSC in its approval of the line. Howard Learner with the Environmental Law and Policy Center, who is representing the groups, argues the PSC lacks jurisdiction to reconsider a permit for the project because of pending legal challenges.

“The commission should be deferring to the state court’s jurisdiction and allowing the state court proceedings to move forward and not interfere with them,” said Learner.

The groups were among those arguing that Nowak and Valcq should be disqualified from any further vote on the project, adding that evidence on the need for the transmission line is outdated.

Dane County Circuit Court Judge Jacob Frost ruled in May that the groups could investigate whether Huebsch was biased when he voted for the project. Frost said they had a right to an impartial decision maker, saying any violation would taint the proceeding. The judge has said that would require him to revoke and remand the decision for further review.

Learner hopes the court will move forward with the trial date set for the end of September. ATC, ITC Midwest and Dairyland have said they plan to begin construction on the Wisconsin portion of the project in October. He said commission members shouldn’t be having ex-parte communications with utility officials on cases they’re reviewing.

“That’s a matter of law. It’s a matter of common sense. It’s a matter of fundamental fairness, but enough is enough. The public deserves better,” said Learner. “Moreover, this is the wrong place to put a huge unneeded transmission line through the heart of the Wisconsin Driftless Area, scenic landscapes, family farms, vital natural resources and rural communities.”

In comments filed with the commission, the Citizens Utility Board said the utilities’ position of perceived bias as the reason for rescinding the order suggests that “any remedies should be pursued via the courts.” RENEW Wisconsin, which has supported the project, said they would support rescinding the commission’s earlier decision and holding a new vote on the existing evidence.

The utilities have argued the transmission line will reduce congestion on the system, improve reliability and improve access to a changing mix of power generation resources.

State Regulators Reject Claims That Their Review Of A Controversial Transmission Line Was Tainted was originally published by Wisconsin Public Radio.