By Corri Hess, Wisconsin Public Radio - Jul 28th, 2021 12:16 pm
Get a daily rundown of the top stories on Urban Milwaukee 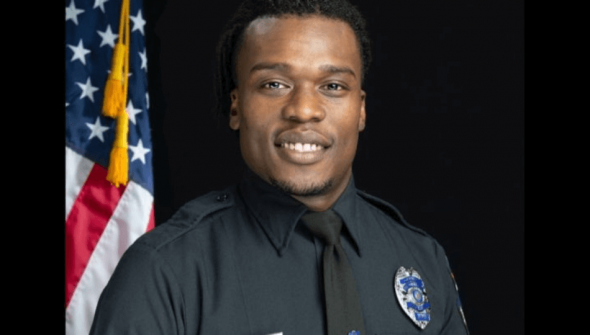 A judge has ruled officer Joseph Mensah can be prosecuted for the killing of a Black man who was sitting in a parked car in 2016. A special prosecutor will be appointed within 60 days.

Milwaukee County Circuit Court Judge Glenn Yamahiro said Wednesday that there is probable cause that Mensah committed a crime of homicide by a dangerous weapon when he killed Jay Anderson Jr.

Prosecutors declined to file charges against the former Wauwatosa police officer in Anderson’s death. Yamahiro ruled Wednesday morning the case should get a second look under the process known as a John Doe proceeding to decide whether to file charges.

Yamahiro said Mensah could have done several things to deescalate the situation, including waiting for back-up, which was already in-route.

“There is reason to believe, based upon the testimony, that officer Mensah created an unreasonable and substantial risk of death,” Yamahiro said.

As Yamahiro read his decision, Anderson’s family cried in the courtroom.

Mensah, who is also Black, said he shot Anderson, 25, as he reached for his gun while in his car at a park in a Milwaukee suburb.

According to a Milwaukee Police Department report, Mensah noticed Anderson had a handgun in the front passenger seat while the men were speaking.

Mensah drew his weapon and ordered Anderson to put his hands up. Anderson raised his hands, but according to the report “on at least four occasions Mr. Anderson started to lower his right arm while leaning toward the front passenger seat where the gun was located.”

According to the report, Anderson “lunged toward the gun with his right hand,” and Mensah shot him five times in the head and once in the right shoulder.

The Anderson’s attorney, Kimberly Motley, has said she doesn’t believe Anderson was reaching for his gun. Instead, she said he was tired, and his hands were falling forward. A toxicology report found Anderson to be legally intoxicated.

Yamahiro said a medical examiner’s previous testimony that Anderson was shot in the ear, made him believe Anderson was facing straight ahead, not lunging for a gun, when he was shot.

“There is no way he could be shot while extending or leaning toward the passenger seat, and then afterwards be facing forward,” Yamahiro said.

Another question Yamahiro had to consider was if Mensah was making a traffic stop when he approached Anderson. Mensah parked his squad car facing Anderson with his high beams on, not his emergency squad lights. By not having the squad lights on, Mensah’s dashcam was not activated.

During several months of hearings, which lasted from February through May, some expert witnesses testified it was a traffic stop. But others said there was no “productive reason” for Mensah to position his squad car the way he did.

Yamahiro said while making his decision he reviewed videos and interviews Mensah conducted with police detectives and on conservative talk radio about the shooting.

Mensah was involved in three on-the-job fatal shootings while he was a police officer in Wauwatosa. He was cleared in all of them by Milwaukee County District Attorney John Chisholm. Mensah later resigned from the Wauwatosa Police Department and took a job with the Waukesha County Sheriff’s Office.

Chisholm’s most recent decision in October, to clear Mensah in the fatal shooting of 17-year-old Alvin Cole, sparked a week of protests and arrests in Wauwatosa.

Yamahiro suggested the state Legislature make changes to how investigations of police-involved shootings are conducted. The Milwaukee Police Department investigated the Mensah shootings and Chisholm works closely with those officers, Yamahiro said.

“The ability for the police to use deadly force is a necessary and established privilege, but it is not a blank check,” Yamahiro said. “The court’s review of (the) investigation in this case raises serious concerns regarding the adequacy of the current statutory framework for investigating officer-involved deaths.”

Judge: There Is Probable Cause Officer Joseph Mensah Committed Homicide In Death Of Jay Anderson Jr. was originally published by Wisconsin  Public Radio.