Part of shift in Republican Party but no GOP politician has same impact as Trump. 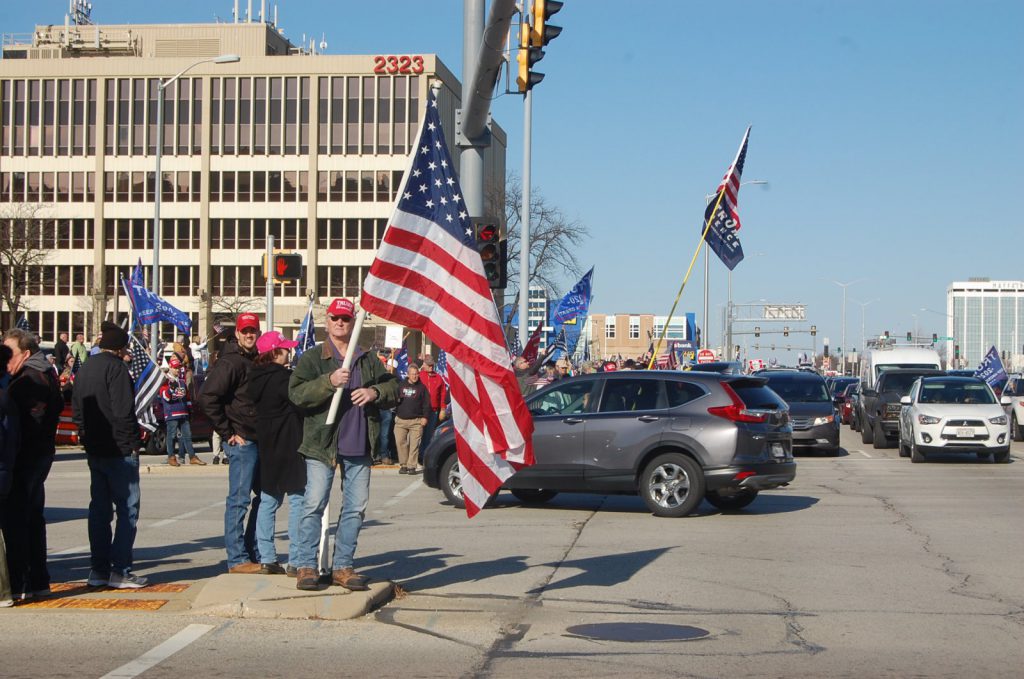 How have Democrats and Republicans changed in Wisconsin and nationally?

There is actually a very specific way to measure this. Among political scientists, the most frequently used scale to measure ideology in the U.S. Congress is DW-nominate. The scale is based on rollcall voting in the U.S. House and Senate. The histogram below shows the ratings of the current (117th) Congress. 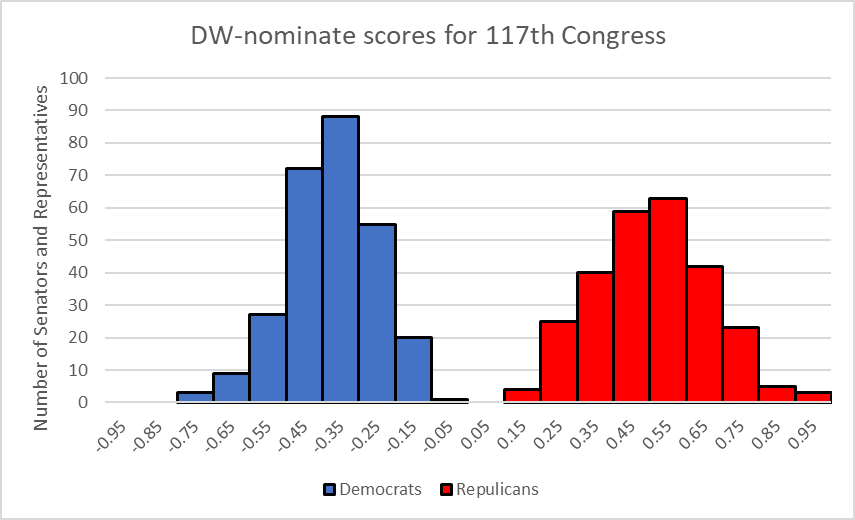 Note that currently there is no one in the center and no overlap between the two parties. The most liberal Republican is more conservative than the most conservative Democrat as measured by DW-nominate.

This contrasts with the 92nd Congress that met between 1971 and 1972. Fifty years ago, there were a number of Republican U.S. Senators and House Representatives whose voting records were more liberal than some Democrats, and vice versa. 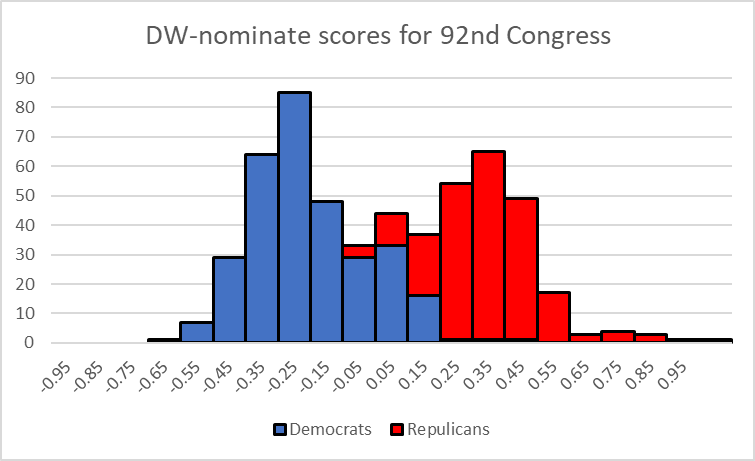 The next graph contrasts the Wisconsin congressional delegation today with that of 50 years ago, using the DW-Nominate data and with blue and red dots to represent each Democratic or Republican member of the delegation. The dots spread across the top are from 1971-’72, when Wisconsin had ten House representatives, half from each party, and two Democratic senators (Gaylord Nelson and Willam Proxmire). The dots at the bottom are from today, with the House delegation reduced by two, because other states have added more residents.

The horizonal scale shows how the members are rated using DW-nominate, with dead center at zero. The main change from the top group of 50 years ago to the bottom group of today is the move of the red (Republican) dots further to the right while blue (Democratic) dots are in about the same ideological territory as in the 1970s. The state’s Republican delegation has become much more conservative than it was 50 years ago. 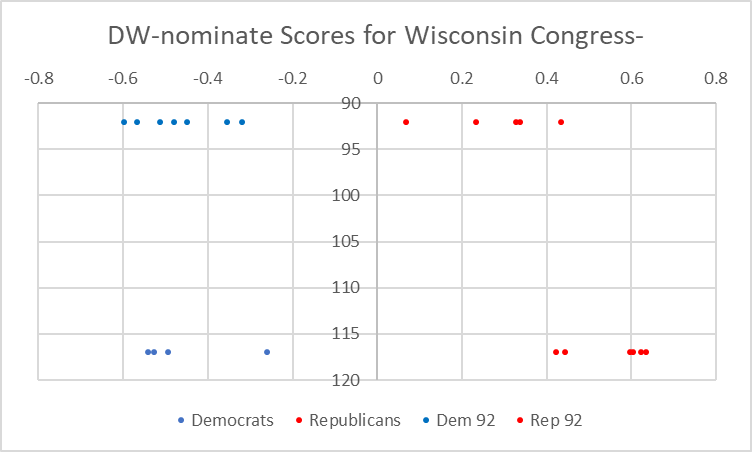 One cause often cited for the diminished overlap between the parties is the shift of conservative Democrats to conservative Republicans with the ending of legal segregation in the South. However, that does not explain the similar evolution in Wisconsin and several other northern states.

Looking at the senators in the 92nd Congress, I was struck by the number of liberal Democrats who represented states outside the South which today offer barren ground for Democrats. Examples include Frank Church in Idaho, George McGovern in South Dakota, and Frank Moss in Utah. Often, these liberals were paired with a very conservative Republican.

One part of the explanation is the nationalization of American congressional elections. Rather than voting for the individual candidate, people vote based on their opinion of, say, Nancy Pelosi.

Gerrymandering is another factor. A successful gerrymander tends to avoid swing districts and create as many safe seats for the dominant party as possible. The result is one-party districts that are safe from a challenge from the other party, but not from a candidate that can appeal to the base — pushing the party further from the middle — in the primary.

A recent analysis looked at the views of Americans who believe the 2020 election was stolen. The analysis used responses to surveys by the Democracy Fund’s Voter Study Group in partnership with the Cooperative Campaign Analysis Project (CCAP) and YouGov. Most recently, about 5,900 people were surveyed before and after last year’s election.

It found that support for Donald Trump and for “stop the steal” was closely related to:

Surprisingly considering Trump’s preference for strongmen in other countries, from Vladimir Putin in Russia to Kim Jong-un in North Korea, support for a ‘strong leader’ was only weakly related to support for Trump and for “stop the steal.” The other beliefs, particularly the antipathy toward immigrants is closely matched to Trump’s own rhetoric. That brings up the question: do Trump supporters’ beliefs stem from their support for Trump? Or do they support Trump because he gives voice to their pre-existing beliefs?

A recent report from three political scientists attempts to answer this question, using data from earlier Voter Study Group surveys. In contrast to normal polling in which a randomly selected group of voters is surveyed, many of these respondents were long-term panelists originally interviewed in 2011-2012.

This analysis looked at responses to questions aimed at assessing hostility to four “Democratic-linked groups” — Blacks, Hispanics, Muslims, and gays — on the 2011-12 survey. It found a strong correlation between hostility towards those groups and Trump approval and favorability in the 2017 and 2018. The next graph, taken from the article, summarizes the relationship between animus toward the four Democratic groups expressed in answers to the 2011 survey (on the horizontal axis) and Trump favorability based on the 2018 survey (on the vertical axis). The greater a voter’s animus toward these four groups the more likely he or she supports Trump. 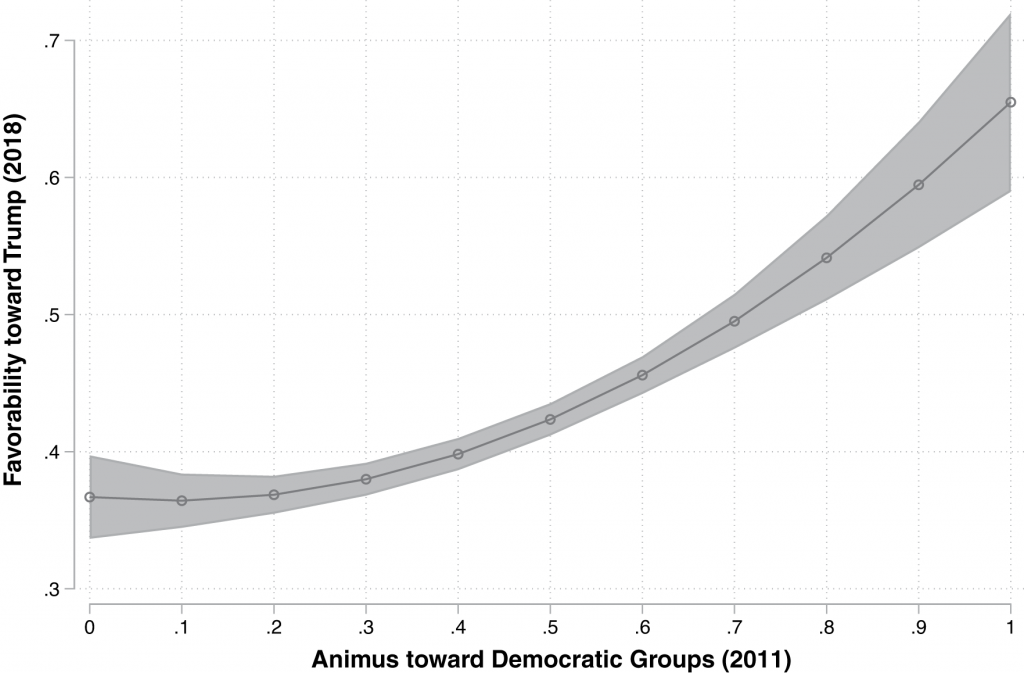 By contrast, the analysis found virtually no relationship between hostility towards those groups and approval of Paul Ryan, Mitch McConnell, or the GOP itself.

Thus, it appears that, rather than fitting their views to those of Trump, the strongest Trump supporters found in Trump someone willing to express their views outright, in a way that Ryan or McConnell did not.

Although politics, unlike economics, is an inherently qualitative business, quantitative models like DW-nominate and the Democracy Fund’s voter surveys can help understand and test what is going on. In this case they provide dramatic evidence for the rapid embrace of the Trump world view.