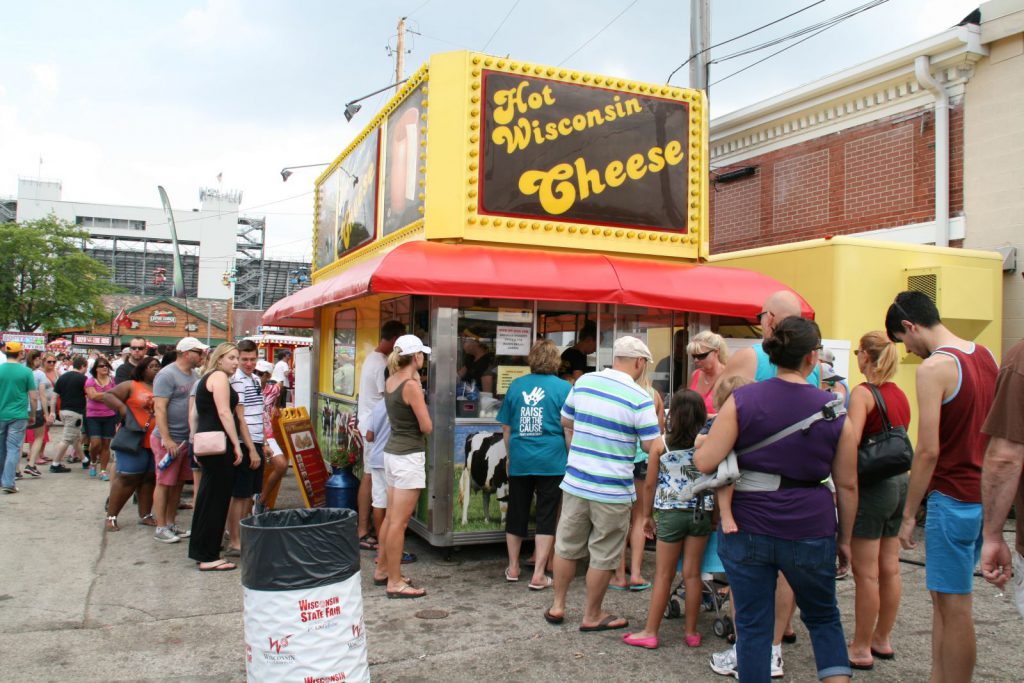 The Wisconsin State Fair is back, and that means that folks once again get a chance to try some unlikely food pairings, absurd concepts and the tried-and-true fan favorites. The fair, which runs from August 5 through 15 this year, announced that there will be close to 70 new options, ranging from cruller-crusted chicken to pizza poutine waffle fries to the Yak-Mac Attack Burger, a yak meat hamburger (seriously) topped with macaroni and cheese. Chris Foran reports:

This year, there are at least eight new foods-on-a-stick, and the combinations are, well, a little unexpected.

… And then there’s the Deep-Fried Wisconsin Fish Fry, basically a whole fish fry dinner rolled together and deep-fried.

Anytime Arepa, a food truck that specializes in the Latin flatbread sandwich and other Venezuelan food, is coming to The Avenue, the new food hall planned for 275 W. Wisconsin Ave. The new location will allow the business to expand upon its food truck menu. Rachel Ryan reports:

Leo Farfan, who owns a food truck called Anytime Arepa with his wife, Maria Salas, is among the Venezuelan immigrants. The couple came here with their two teenage sons two years ago, leaving everything behind.

They started Anytime Arepa in 2018, selling arepas at farmers markets and small events, as well as catering private events. After taking a rotating slot at Zócalo Food Park on South Sixth Street for about a year, they secured a full-time slot.

Now, they plan to open a second location as an indoor venue at the 3rd Street Market Hall…

Farfan said they will keep the popular build-your-own arepa option… The choices include: beef, pork or chicken; cheddar, jack or feta cheese; black beans and plantains; and garlic, avocado or spicy salsa.

Farfan teased some new additions to the meat selections, including a fish similar to tuna and asado. They will also offer some gluten-free options.

A local favorite Dairy Queen in South Milwaukee closed its doors after 50 years of business in 2019. Now, a new cafe concept will bring new life to the space. Lori Fredrich reports:

For Becky and Zach Kinzer, owners of the mobile espresso and milkshake trailer Better Together Cafe, the idea of opening their own cafe has been a long held dream. And it’s one they hope will come to fruition by mid-to-late August…

The new cafe itself is expected to accommodate seating for about 25 guests in a space that Becky Kinzer describes as “modern but cozy.”

The Kinzers are planning partnerships with other local businesses including bakeries, food trucks and shops like La Macaron in Brookfield to offer light breakfast and lunch options (including paninis and wraps)…

The Kinzers will also add special private label coffee created by a local roaster, as well as a soft serve ice cream machine so that they can make their own ice cream right at the shop.

The current milkshake menu, which includes whimsical offerings like the Unicorn (a milkshake served up with a sour straw and topping of cotton candy) will definitely remain…

Tentative hours for Better Together Cafe are Tuesday through Sunday from 7 a.m. to 7 p.m.