By Madeline Fox, Wisconsin Public Radio - Jul 17th, 2021 11:56 am
Get a daily rundown of the top stories on Urban Milwaukee 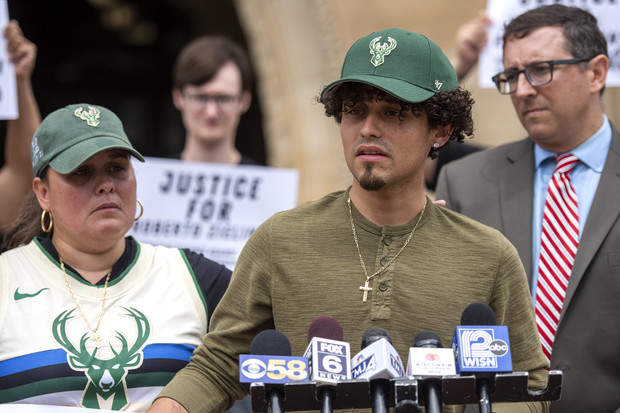 The family of Roberto Zielinski, the 49-year-old who was shot and killed by a Milwaukee Police Department officer, says the body camera footage of the shooting that police released was heavily and misleadingly edited. They are calling on officials to make the full tape publicly available.

“The Milwaukee Police Department says that it is releasing a video of the shooting for transparency purposes, but releases a video that is doctored and edited to push their narrative. That is not transparent, that is not accountability, and that is not justice,” said Russell Ainsworth, the family’s attorney, at a Friday afternoon press conference outside Milwaukee City Hall.

Ainsworth said the police omitted that Zielinski had been calling out for help moments before he was shot, and asked for his sister — Angela Gonzalez, a Milwaukee police officer — to be contacted. He says the family knows from Zielinski’s call log that he had called 911 himself before his confrontation with police.

Gonzalez’s son, Jacob Gonzalez, was at the press conference Friday.

“My mom’s my idol, I’ve got other members in the family that have been through these trainings, that work their lives to become something that they want to be, and they’re doing good for the community,” Jacob continued. “I wish that for other crises that happen, just like what happened with my uncle that day, can be treated in the right way, in a way where officers know how to handle and to respect the civilians that they protect.” 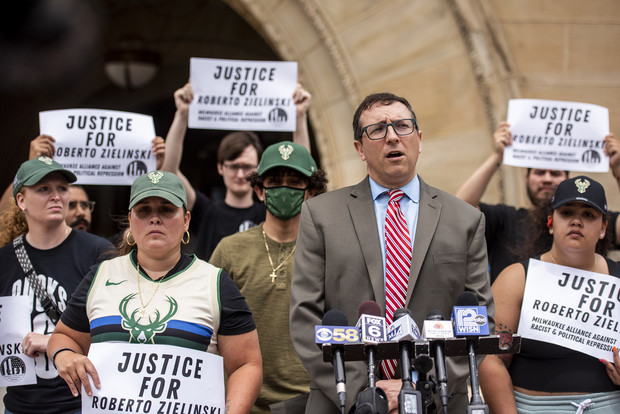 Milwaukee police have said that a 47-year-old officer shot Zielinski after he was firing shots from his porch and would not drop his gun when ordered to do so. Ainsworth said the shots occurred before police arrived, when Zielinski was in an alley and on the front porch of his home.

Police released some of the footage Friday. It includes two 911 calls made about Zielinski, including one in which his neighbor, whose name is redacted, tells police “He’s legit trying to be suicidal, so if they come up on him, he’s probably gonna shoot.”

In the video, Milwaukee Police Capt. Patrick Pajot describes what’s happening. He said the officer who shot Zielinski was assigned to a tactical enforcement unit.

“Officers in this unit received special training to respond to these volatile types of calls and are trained to attempt to deescalate the situation,” Pajot said in the video. “They can be heard asking the subject several times to put the gun down and tell him ‘it’s OK'”

In an emailed statement, Milwaukee police said it only redacts information out of necessity, usually to protect the identity of people not with the police department. The statement noted that the police department disguised the voices and removed identifying information for the 911 callers, and comments made by Zielinski that would have identified a member of his family.

“The commentary in MPD’s community briefings are not meant to persuade the viewer, but rather to provide context of the incident,” the statement said. “MPD makes a concerted effort to include the appropriate level of body camera footage necessary to provide an accurate depiction of what occurred and does not remove any content because of how it may reflect on the department.”

Waukesha Police did not respond to a request for comment.

The family and their attorney dispute that Zielinski was a danger to officers when he was shot.

“When he was on the back porch, in the interaction with the police that led to his death, he fired no shots, he posed no threat, and yet he was gunned down by a Milwaukee officer,” said Ainsworth.

Wisconsin law requires an independent agency to investigate cases where a civilian dies as a result of a police officer’s actions, or inaction. The Waukesha Police Department is leading the investigation into Zielinski’s shooting. The Milwaukee officer was placed on administrative leave, as is routine in police shootings. The officer has not been identified publicly. 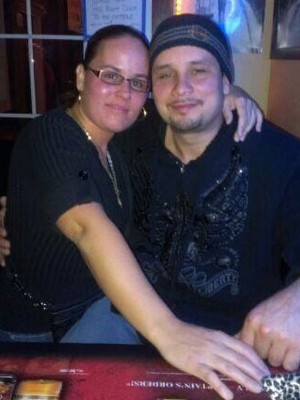 Ainsworth said Zielinski is the father of two boys, ages 23 and 14, and had just finished bartending school. He wanted to be a counselor.

“He wanted to take what he had struggled with, and overcome in his life, and bring it to other people,” he said. “He never had that chance.”

The attorney said Zielinski’s family is still considering its options when it comes to suing the department. They are calling for the police officer who shot Zielinski to be charged.

The family of Joel Acevedo, who was killed by off-duty Milwaukee police officer Michael Mattioli, similarly called for the release of body camera footage from the events leading up to Acevedo’s death. A judge ruled in May that the footage could be released.

One thought on “Controversy Over Police Killing of Roberto Zielinski”