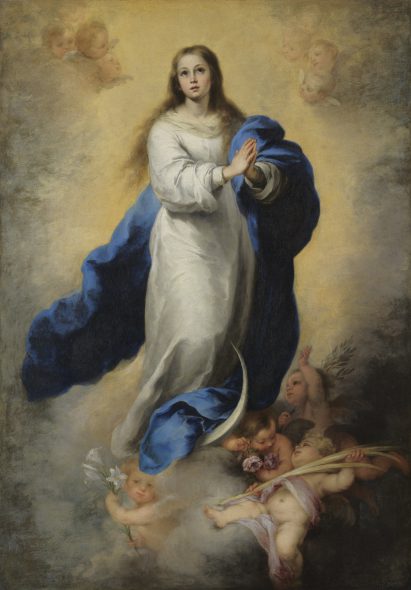 The Golden Age of Spanish painting is lauded for its use of earthy, figurative realism and an open, overt use of the paintbrush. Extending for roughly two centuries between 1500 and 1700, artists like Diego Velázquez, Bartolomé Esteban Murillo and Jusepe de Ribera led the way in deconstructing the Italianate dominance of western art and gained eminent status among artists and aficionados.

During the 1800’s, the Louvre Museum in Paris began exhibiting more Spanish paintings, and artists such as Edouard Manet began to emulate the subject matter, color and light from close study. American artists abroad did the same, and Spain and the Prado Museum became a destination for study and sightseeing. The great portraitist of American society, John Singer Sargent, wrote that Spanish painting contained “realism and transcendence.” It is this ethos that brought Americans to Spain, and brought its influence into their artwork, creating an “hispanismo,” which carried with it pastiche and cultural appropriation.

The Milwaukee Art Museum has gathered old master Spanish paintings from several major museums like the Prado and Museé de Orsay, American made copies, and original works invested with a Spanish vogue. “Americans in Spain: Painting and Travel, 1820-1920” is a large, illuminating and at times out-of-synch summer blockbuster.

The exhibition begins with Manet’s prints of a Spanish guitar player and a dead bullfighter. Francisco Goya, last of the old masters and first among modernists, displays a copy of Diego Velázquez’s Aesop. Both Goya and Manet were deeply influenced by the frank realism and heroic depictions of modern life that Velázquez achieved.

Russet and red walls lead on to large canvases by Murillo and Ribera. Ribera’s Saint John the Baptist offers an amazing tenebrism, anatomical composition as well as a masterful depiction of a lamb in half light. Its drama and frankness clearly suggests why Americans flocked to the Prado to study and copy. The exhibition unfolds to include architecture, gardens and landscapes, master copies and gems of experimentation by Mary Cassatt, John Singer Sargent, Robert Henri and William Merritt Chase among many others.

Visually, the exhibition is sumptuous. Walls are painted to evoke dusky, historical galleries. Then, as visitors enter galleries devoted to landscape, the walls and lighting vault into the airy pastels of the Mediterranean sun. Entryways are carved to echo Islamic architecture of the famed Alhambra of Granada.

Mary Cassatt is prominently represented with half-length paintings of toreadors. Her composition and use of color are flawless, though the theatricality of a flirtatious encounter with a matador seems saccharine in contrast to the subtle human interactions for which she is known. Another canvas depicting the same figure quietly smoking offers more gravity. Together, they cement Cassatt as one of the great expatriate painters.

In the same gallery, two full-length portraits square off. La Carmencita, or Carmen Dauset Moreno was a famed Spanish dancer who toured the U.S. in 1890. Sargent and Chase have both depicted her, and it is wonderful to see their interpretations facing each other. Sargent’s version sparkles with unabashed mastery, the dancer in a golden dress offering the viewer a triumphant gaze. Chase’s version is more animated but less dazzling. There is also a film by Thomas Edison showing Dauset performing in grainy verisimilitude.

Robert Henri also used the full length portrait format to depict dancers and matadors. Of the several examples here, his treatment of the dancer Betalo Rubino is most memorable. Wearing a theatrical, less-than-authentic costume, the figure is composed in the shallow space and vertical format used by Veláquez and Murillo, but Henri has pushed his palette into a more personal, colorful key, used again in depicting Rubino in the MAM’s own painting by Henri, displayed nearby.

Another gallery discusses labor practices in Spain in the 19th century and how Americans loved touring the Royal Tobacco Factory in particular. Walter Gay painted a room of “cigarette girls,” row after row of young women rolling tobacco. However, their clothes and demeanor have been romantically heightened, even to the point where Gay tucks a red rose behind one of the girl’s ears, as in Bizet’s opera Carmen. This type of problematic dramatization should be much more bluntly explained. For example, historical photographs of the factory in contrast to this romanticized account would help viewers better understand the exoticism inherent in this exhibition. Frank discussions about appropriation, fetishization and otherness are required when dealing with problematic histories. The exhibition does offer some language on this issue, but as so many art works eschew authenticity for romantic inflection, more context seems necessary.

A humble still life in the final gallery distills the essence of the show. Chase painted a copper or brass ladle resting on a red cloth. It is full of juicy impasto and dramatic shadow. The everyday drama and overt paint handling of Velázquez and Murillo is fully invested in this transcendent object. Chase moves beyond pretense to offer the full experience of the Spanish artistic tradition. 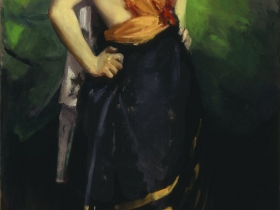 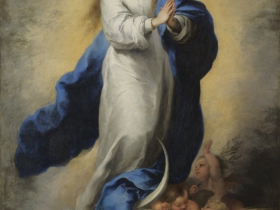 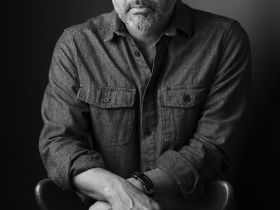