Some hoped pandemic might prompt action on this. Not so far.

By Shamane Mills, Wisconsin Public Radio - Jul 14th, 2021 02:41 pm
Get a daily rundown of the top stories on Urban Milwaukee 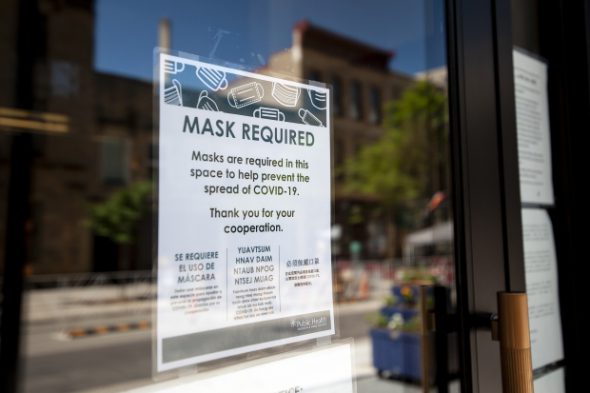 A sign hangs on the door of a business in downtown Madison on Wednesday, July 22, 2020. (Photo by Angela Major/WPR)

Crisis can prompt change that prevents future catastrophes. But expectations that the COVID-19 pandemic would turnaround decades of what critics say has been inadequate public health funding so far have fallen short of what some say is needed.

Wisconsin ranks 41st in the nation for per-person spending on public health, according to the University of Minnesota’s State Health Access Data Assistance Center. People hoped the pandemic would change that, but it didn’t. Some think officials might still come around.

“The bottom line is: all of us in public health are hoping that this changes the minds of officials, and we do see an influx of more money to public health,” said former Iron County Public Health Director Zona Wick.

Various studies show it’s been a longstanding problem for Wisconsin and other states that had less than optimal public health funding before the pandemic.

“Our health departments tried to respond to the pandemic with outdated systems, overworked staff and a population that was less healthy to begin with. That was the impact of chronic underfunding of public health,” said Dara Lieberman, director of government relations at Trust for America’s Health.

The group’s most recent report says the number of full-time local public health staff in cities across the United States decreased by 16 percent from 2008 to 2019.

In northern Wisconsin, pharmacists and retired nurses were recruited during the pandemic to help a strapped Iron County Health Department cope with vaccination and contact tracing which overwhelmed many health departments across the state.

Some were volunteers, others were additional paid staff, funded through federal coronavirus relief aid and now the American Rescue Plan.

“But using one time funding as the source of supporting your public health system is a really tenuous approach to investment in public health,” acknowledged state Department of Health Services Deputy Secretary Julie Willems Van Dijk during a July 9 media briefing.

State health agencies, like DHS, also saw their workforces shrink. Across the country, state health agency lost almost 10 percent of their staffs between 2012 and 2019, according to Trust for America’s Health.

Trust for America’s Health’s report says personnel cuts translated into fewer trained professionals available to do critical work as the COVID-19 pandemic spread across the country.

A lack of personnel and the pressure to keep communities safe as some resisted mask-wearing and other pandemic precautions, forced some public health directors in Wisconsin and other states quit.

“This isn’t over. This is far from over,” said Wick. “That makes health officers very nervous. And it’s probably why many health officers have left their jobs. This has been very stressful.”

Post Pandemic Health Funding: ‘We Hope This Changes The Minds Of Public Officials’ was originally published by Wisconsin Public Radio.