By Laurel White, Wisconsin Public Radio - Jul 8th, 2021 12:24 pm
Get a daily rundown of the top stories on Urban Milwaukee 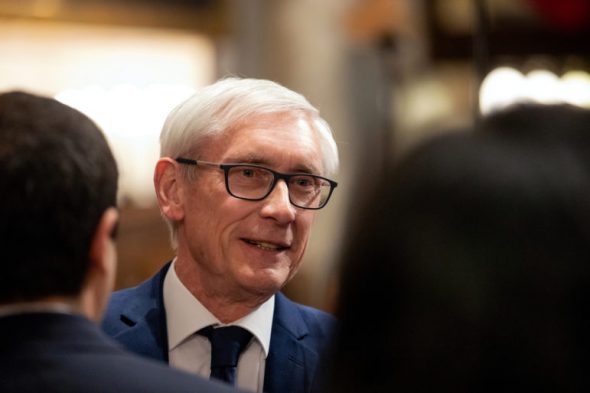 Gov. Tony Evers has signed the 2021-2023 state budget, which includes a more than $2 billion tax cut backed by Republicans.

The Democratic governor used his veto pen to make 50 changes to the budget. Evers has one of the most powerful veto authorities in the country, with the ability to delete words, numbers and punctuation from the spending plan.

Speaking at a Thursday morning press conference at an elementary school in Whitefish Bay, the governor framed his signing of the mostly Republican-backed budget as a bipartisan move.

“In many ways, this budget presents a false choice between the priorities the people of the state care about and deserve,” Evers said. “But after eight long years of politicians making decisions for all the wrong reasons, I ran to be governor of this state and promised I would always put people before politics.”

The governor said vetoing the entire budget was “not an option,” because doing so would have compromised billions of dollars in federal coronavirus aid to the state. He also said a Wisconsin Supreme Court decision last year “made it more difficult to partial(ly) veto the budget, there’s no doubt about that.”

The GOP-controlled Legislature approved the two-year spending plan last week on mostly party-line votes, with Republicans voting in favor and Democrats against. Several Democrats who voted for the budget expressed hope that Evers would use his veto power to make changes to state spending levels on things like education.

Overall, the budget approved by lawmakers spent billions less than Evers called for and omitted major proposals from the governor, including legalizing marijuana, expanding Medicaid and raising the minimum wage. It also included a $3.4 billion tax cut the governor didn’t propose.

Evers said Thursday the budget was written in such a way that prevented him from using his veto pen to increase state school spending, as he did for the last budget. Republican leaders have said they intentionally kept this budget concise to limit the governor’s editing power.

However, the governor used the budget-signing press conference to announce he will direct $100 million in additional federal pandemic stimulus money to schools. Schools are already set to receive $2.3 billion under the latest coronavirus aid packages.

“Other people playing politics hasn’t stopped me from doing what’s best for our kids before,” Evers said. “Schools in districts across our state will be able to use these funds to support kids in the classroom, hire educators and staff, provide additional educational or mental health supports, buy art supplies, or computers, keep the lights on — whatever it takes to provide a great education.”