By Isiah Holmes, Wisconsin Examiner - Jul 2nd, 2021 11:01 am
Get a daily rundown of the top stories on Urban Milwaukee 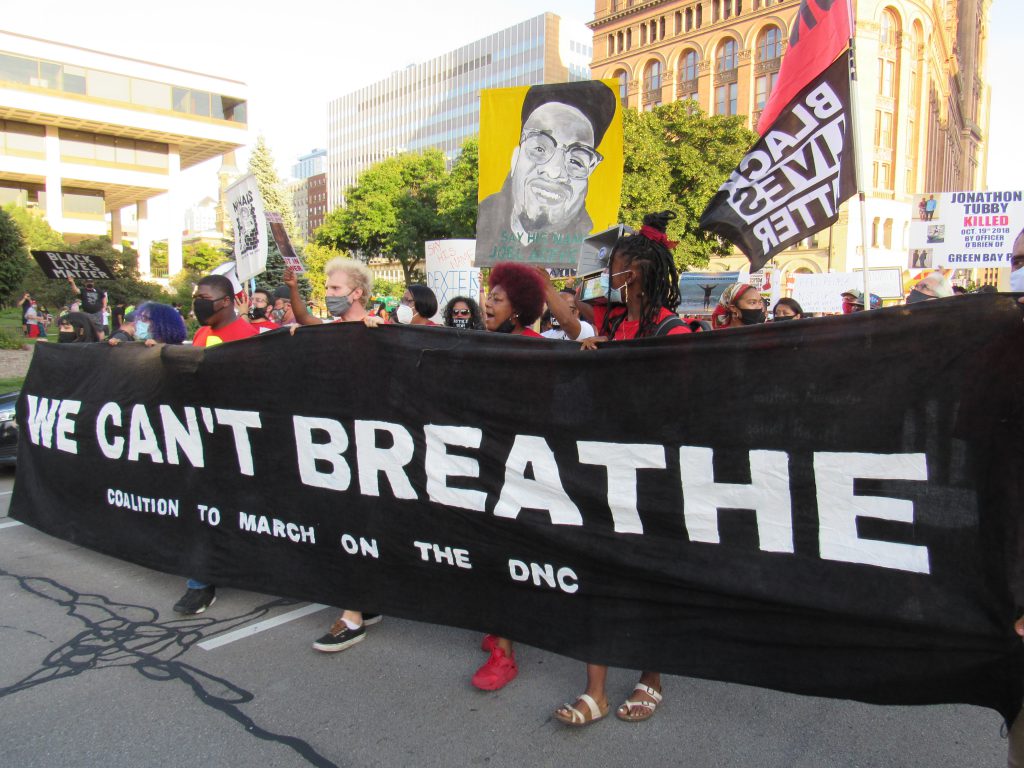 The march on the DNC in Milwaukee, August 20th, 2020. Photo by Isiah Holmes/Wisconsin Examiner.

“We’re here to say that enough is enough,” said Angela Lang, executive director of Black Leaders Organizing for Communities (BLOC) during a press conference at the state Capitol on June 30, surrounded by allied groups. “Elected officials continue to play politics with our lives,” she declared. “They continue to do policy work that actually doesn’t protect our communities. And, after a year of protest, we were given this opportunity to have a task force where our thoughts and our feelings could be heard. It was very clear, very very quickly, that people did not enter that process with good faith.”

For the past several weeks policing-relating bills have been in the public spotlight. Some were informed by the Speaker’s Task Force on Racial Disparities, a bipartisan body appointed to make recommendations on how to address systemic inequalities in policing and in other areas. Many community organizers and activists, however, are, to say the least, disappointed at the results.

“My proposal is for us to sit down and figure out some guardrails. Things we could give on, things we wouldn’t.” Steineke wrote.

“Worse case scenario, we show a willingness to work on these issues and make the Democrats say no to things,” he added.

“We knew that we weren’t going to get anything substantial from that task force. But we continue to push anyways.” Activists were dismayed by some of the bills that came out of the task force and earned Democratic support and were upset when they heard that Gov. Tony Evers was set to sign four of the bills. On June 22, Evers signed the four bills. Those include a ban on chokeholds with some exceptions, requirements for police departments to publish their use-of-force policies online and a $600,000 grant program for community-oriented policing. Evers called the bills “a first step” to address systemic problems with police in the state. 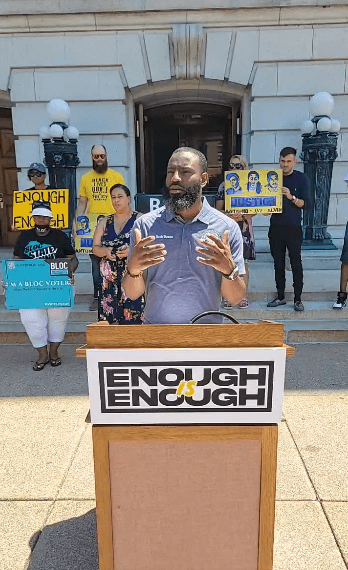 Rep. David Bowen (D-Milwaukee) speaks during the press conference at the capital alongside BLOC, The People’s Revolution, and others. Screenshot by Isiah Holmes/Wisconsin Examiner.

BLOC went to the Capitol on June 30 to announce that the group and more than two dozen allies were sending a letter to Evers. “We agree that this is a first step,” said Lang, “so we’re going to give out homework to everybody. Not only does the governor need to continue to act, but the Legislature needs to continue to act as well. This moment calls for boldness, for courage, for imagination for our communities — to say let’s invest in our communities.”

She pointed to Milwaukee’s city budget, nearly half of which is allocated to police while the health department gets 3%, as an example of skewed priorities. “We wanted to make sure we got the governor’s attention,” said Lang. “He signed those bills quietly, so we took out a full-page ad with a letter. That says we demand that he continues the conversation. So his next step, and his homework, is to create an executive commission.”

Such a commission, Lang argues, must not include elected officials or any current or former law enforcement officers. “There needs to be at least one hearing in Milwaukee,” she added, “something the task force failed to do. It needs to be community driven, in every sense of the word.”

Lang also pointed to a package of bills introduced by Rep. David Bowen (D-Milwaukee) and Rep. Francesca Hong (D-Madison), which have a variety of policing bills including banning warrior training among police, investing in violence prevention, and other policies. “We have some real solutions that were skipped over by the task force,” said Bowen during the press conference. “Our main goal was to not overlap what they did, but to really look at what was blocked by the task force.” He called for “a real conversation” about more significant change.

Bowen’s proposals include taking the decision about whether to charge an officer for a shooting out of the hands of district attorneys, instead asking courts to appoint a special prosecutor. “We are not going to let up,” said Bowen. “We are not going to allow the Legislature to say they are cleaning their hands of this issue, and they’re just done with it — they’ve done what they could. We’re going to say no, get back in the room. Actually bring up these bills, actually give them a hearing, give them votes, bring them to the floor. Allow the Legislature to vote on it. If you don’t want to bring in the reforms and solutions people are calling for, let that stand on the record. … But don’t try to play us as if there’s nothing else that we can do to save Black lives in the state.”

Hong decried the political strategies and games she says are blocking legislative reforms. “What I’ve learned is that the Capitol really engages in a lot of gatekeeping of information,” said Hong. “And it leads to a lot of complacency.” Hong expressed disappointment at Republicans for using procedural tactics to block reform and some Democrats she feels aren’t pushing hard enough. “I don’t understand all of it,” she confessed. “I don’t understand the absurdity of everything that goes on in there, but it’s how they maintain power,” said Hong. “It’s how Republicans maintain power.” 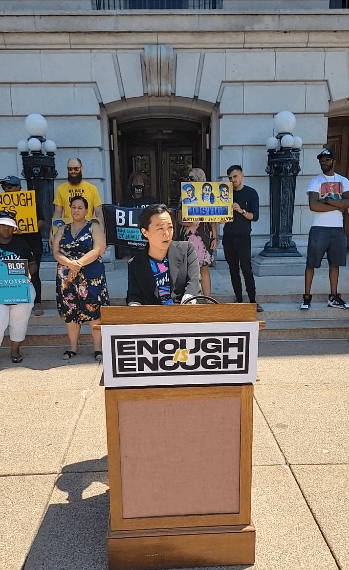 For many outside the Legislature, the stakes are frustratingly high. “Lets not wait for another Jacob Blake moment for us to find a light all of a sudden, then want to bring solutions to the table,” said Bowen. “It’s like a Black person has to die in order for us to get the attention and the urgency that we need from our colleagues that, a lot of times, don’t have the same skin color as us. So what we’re saying is let’s get this done now. Let’s focus on the real reforms now. And let’s ensure that we’re having an honest conversation at a table that’s built with the community.”

Another person who spoke at the press conference was Nate Hamilton, brother of Dontre Hamilton, killed by a Milwaukee officer in 2014. Hamiliton’s shooting was the first to be investigated under Wisconsin’s Michael Bell law, mandating an outside agency lead a police shooting investigation. “You know today, just driving out to Madison and coming to a place where change is supposed to happen, fairness is supposed to prevail — we do not see that,” said Hamilton. “We do not see the Black and Brown lives being taken serious.”

“What we look for today is to say enough is enough. Enough of not being heard, not being taken serious, not being valued,” he added.

For organizers and for families like Hamilton’s, the struggle doesn’t stop. “That’s why we fight,” said Mariah Smith, an organizer with The People’s Revolution. “The fight does not stop. The profiling doesn’t stop. The killings don’t stop. The executions don’t stop, the murders don’t stop. They don’t stop putting our brothers and our sisters behind bars for the same offenses, but for exponential amounts of time, compared to a white person.”

BLOC and other groups demand real police reform from Evers was originally published by the Wisconsin Examiner.