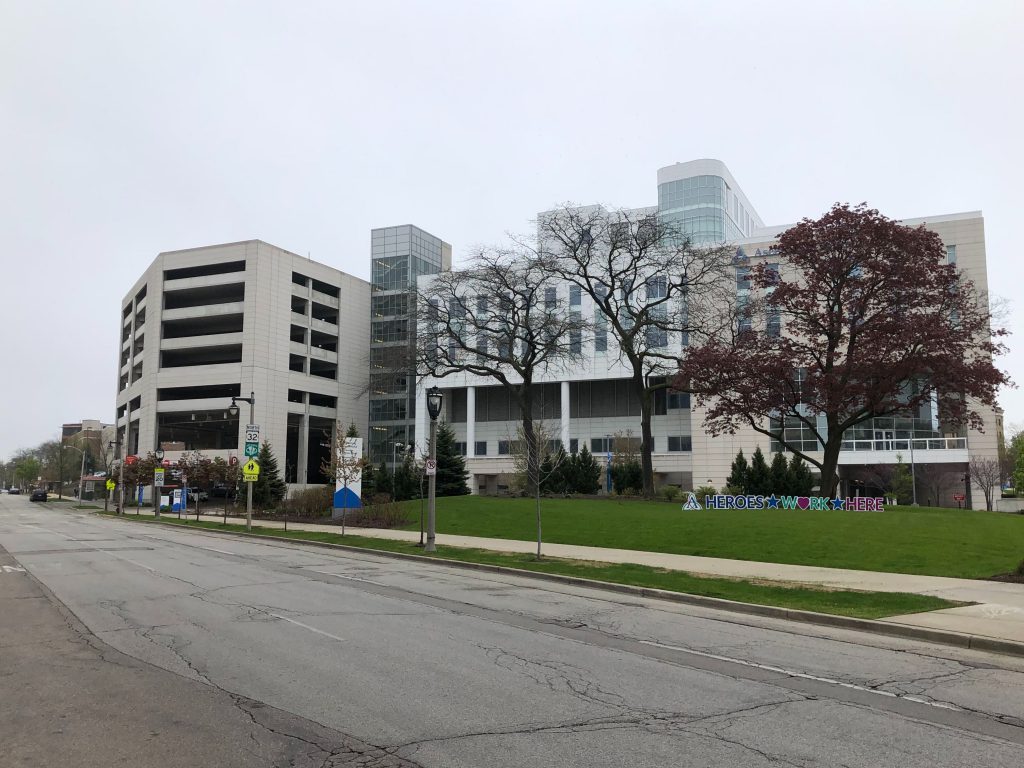 How has COVID-19 affected American life expectancies? A recent academic study calculated the effect of the pandemic on 2020 life expectancies. The chart below summarizes the results for three United States populations. For comparison, it also includes calculations for sixteen other high-income countries.

Using morbidity data—the number of deaths for each age group–the study calculated life expectancies for 2020. Implicitly, this includes the assumption that 2020 death rates will continue into the indefinite future. Though they might improve so long as efforts to control COVID-19 grow steadily more successful. Thus, the life-expectation calculation does not depend either on predictions about the future or the use of data from past years. What happens in 2020 stays in 2020.

The vertical scale in this and other charts in this column shows the life expectations in years. The first column (rust-colored) shows that for non-Hispanic American whites. After steadily increasing in the postwar years, life expectancies for this group stagnated or declined slightly from 2010 to 2018. This may be related to the recent phenomenon of so-called “deaths by despair”—suicide, drug use, and alcoholism—among middle aged white Americans. 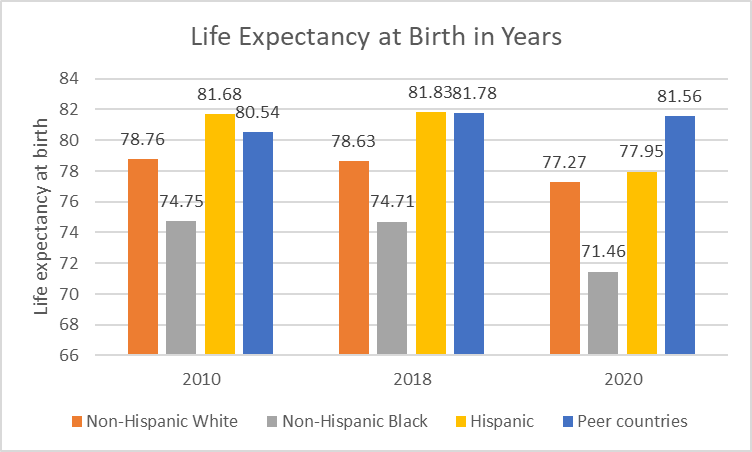 Life Expectancy at Birth in Years

By contrast to the 2010 to 2018 story, all three American groups showed a substantial decrease in life expectations between 2018 and 2020. 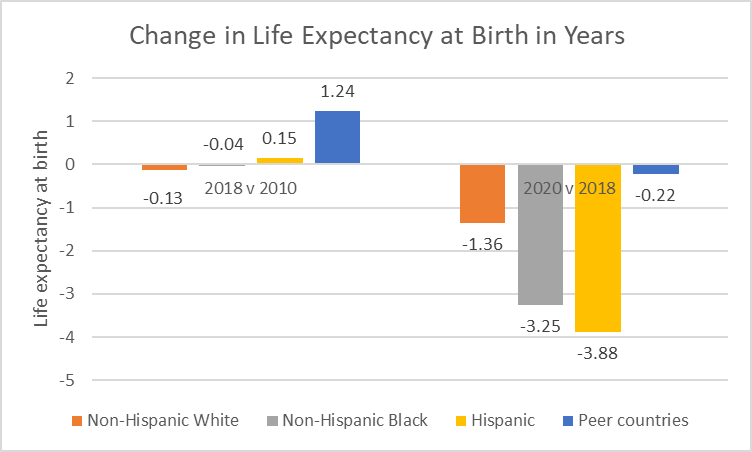 Change in Life Expectancy at Birth in Years

In contrast to the three United States groups, the sixteen peer countries continued to enjoy increased life expectancy in the years prior to the pandemic—an average increase of 1.24 years between 2010 and 2018. Once the pandemic hit, the average decrease was much smaller than in the United States.

The study reported that changes in life expectancy varied substantially across the 16 peer countries. Six–Denmark, Finland, New Zealand, Norway, South Korea, and Taiwan–had increases in life expectancy between 2018 and 2020. Among the 10 others–Austria, Belgium, Denmark, France, Israel, Netherlands, Norway, South Korea, Portugal, Spain, Sweden, Switzerland and the United Kingdom–decreases in life expectancy ranged from 0.12 to 1.09 years, but none approached the 1.87-year loss seen in the US. The report notes that Australia, Canada, Germany, Italy, and Japan were not included “because of incomplete mortality data.”

The next graph shows historical life expectancies for the United States and Wisconsin since 1960. Again, it shows the stagnation during the recent decade prior to the pandemic. (I should note that the study showing expectancies for 2020 did not report values by states or by cities. In this and the remaining charts I calculated Wisconsin and Milwaukee values by assuming that they lost the same number of years as did the nation as a whole.) 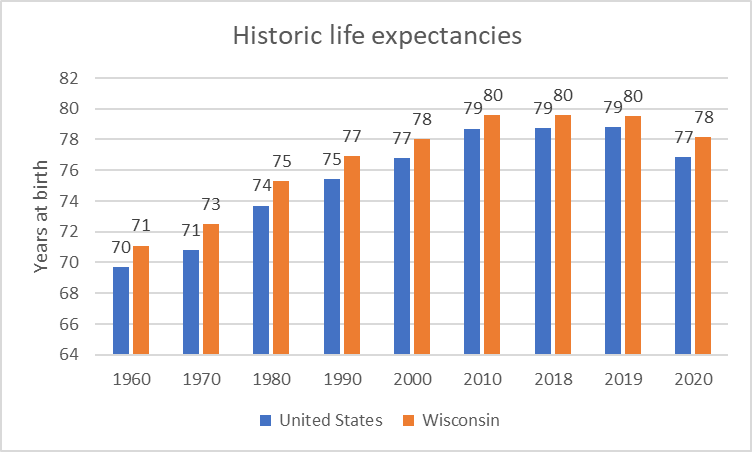 Here are estimated life expectancies for the United States, Wisconsin, and Milwaukee for 2018 (dashed line) and 2020 (solid line). Since values for 2020 have not been published for states and cities, those values were calculated using national figures for the decline for each ethnic group. 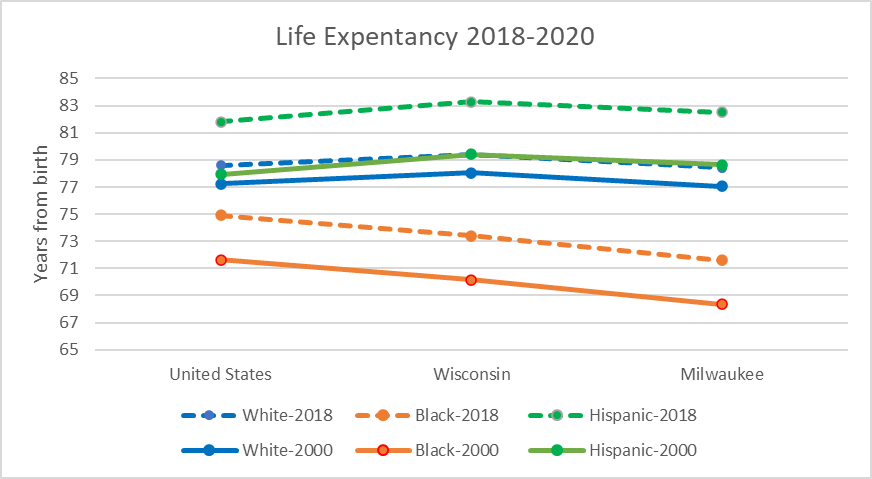 While they have not been promoted as strategies to reverse the stagnation in the growth of life expectancy in the United States, many of the elements of President Joe Biden’s American Jobs Plan and his American Families Plan would appear to have that effect. One might expect that these plans would be most popular in places with weak life expectancy. (Note that Wisconsin is almost at the center of the chart, reflecting both the fact that it is play politically and its mid-range life expectancies.)

As the next chart suggests the opposite seems to be true. In last November’s election, Biden was least successful in states with shorter average life spans. I find this puzzling. Normally one would expect voters to pursue their interests. 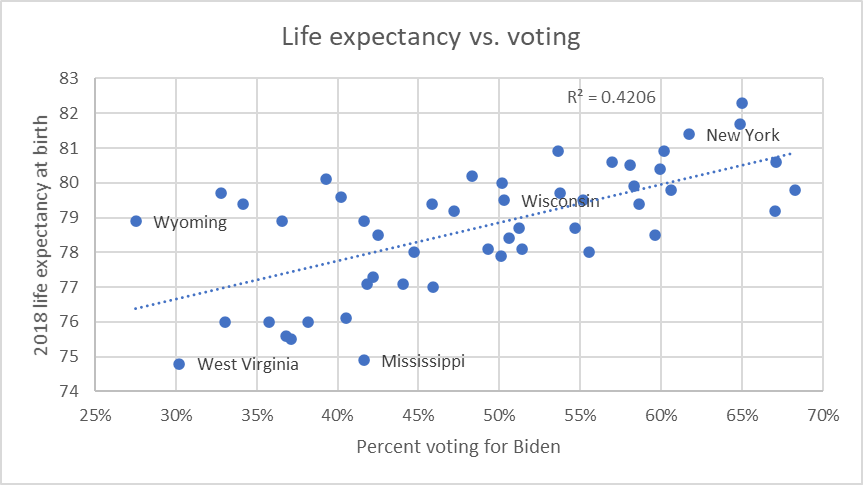 The United States has fallen behind other rich and wealthy countries when it comes to extending life expectancy in normal times and in effectively responding to an attack by a lethal virus. Even before the pandemic hit, the United States’ average life expectation had ceased improving. There may be a number of reasons for this, including the lack of an effective safety net and the increasing ability of wealthy people to capture the bulk of the benefits from an expanding economy.

However, the cause of the 2020 decline in life expectancy seems firmly rooted in the incompetence and inconsistency of the Trump administration’s response to COVID-19.