Tammy Baldwin Is All About The Beer

Senator wins attention with Wisconsin beer, not for the first time. 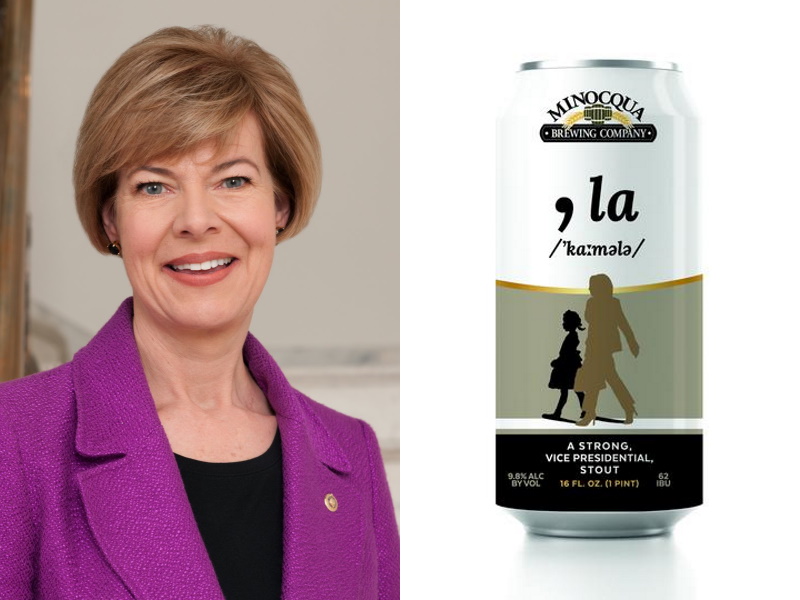 It there anything cornier than a politician promoting a state-made product? And yet it always seems to work. Especially if it’s a product like beer.

Wisconsin’s Democratic U.S. Senator Tammy Baldwin won special attention from Politico for that in its account of a celebratory gathering of women senators last week.

“Sen. TAMMY BALDWIN was ready to party,” the story began.

“Baldwin brought Harris a four-pack of “,la” (as in “comma-la”) from Wisconsin’s Minocqua Brewing Company. The beer pays homage to Harris, featuring a stylized image of her on the can. ‘It’s the strongest beer we could make, a 9.7% alcohol by volume imperial (we prefer Vice Presidential) stout,’ the brewery boasts on its website.”

Urban Milwaukee has previously written about the Minocqua Brewing Company, which sells a whole line of politically themed beers guaranteed to delight Democrats. One of the first was Inauguration Day beer, a chocolate blonde ale that offers “a peaceful transition to flavor,” and quickly sold out. A more long-term choice is Joe Biden beer, a blonde ale that is “inoffensive and never bitter.”

Politico couldn’t resist noting that the Biden beer, at 5.5 percent, is much weaker than the one honoring the vice-president. For that matter, even the Minocqua company’s Bernie Brew, honoring the anything-but-moderate Sen. Bernie Sanders is only 6.5% alcohol.

Get a daily rundown of the top stories on Urban Milwaukee
Besides honoring Harris, Baldwin’s gift was also a shot at Wisconsin’s senior senator, Republican Ron Johnson, as Minocqua Brewing donates 5% of all profits to a SuperPAC dedicated to defeating Johnson and other Republicans up for reelection in 2022.

This was not the first time Baldwin won media attention for brandishing beer. Back in 2018 she got coverage for bringing a couple of bottles of Spotted Cow to her appearance on the Seth Meyers show. Meyers duly noted that Wisconsin “is known for cheese and beer” (thanks Seth), but as Matt Wild, the Sherlock Holmes of Milwaukee popular culture noted at the time, the brew was identified only as a “famous beer.” Neither the Spotted Cow name nor its maker (New Glarus Brewing Company) was mentioned by Baldwin. And yet she won reelection!

Then there was Baldwin’s bet with Ted Cruz over the Packers-Cowboys playoff game back in 2015. Baldwin is known for crossing the aisle to seek bipartisan partnerships, but with Ted Cruz? That’s more like crossing onto another planet. Baldwin was offering a Danish-style Kringle, Wisconsin’s official pastry, and once again, Spotted Cow beer if she lost, while Cruz was offering not a slab of beef or maybe a couple quarts of motor oil, products Texas is known for, but some Shiner Beer and Blue Bell ice cream.

Seriously? “I had to note the irony of a Texan giving a Wisconsinite beer and a dairy product,” Baldwin said.

And yes, since the Packers won the game Cruz had to pay up, giving Baldwin a couple six-packs of Shiner Bock and three gallons of ice cream. Did she drink that beer? I have my doubts. In fact, it’s far from clear that any of the senators feting the vice-president last week tried that industrial strength “,la” beer.

“They appear to have drunk rosé and sauvignon blanc,” Politico reported.

But the good news, in a time of toxic partisanship, is how well the ladies from both parties got along, joining in saluting Harris. “I think everyone was feeling really proud of her,” Sen. Tina Smith (D-Minn.) said. “That was expressed by Republicans and Democrats.”

Categories: Back in the News, Food & Drink, Politics

2 thoughts on “Back in the News: Tammy Baldwin Is All About The Beer”