If anything they helped Trump, an analysis of state election results show.

In their effort to prove that Donald Trump really won the 2020 election, Republican legislators in many states have proposed—and in 14 states so far have enacted—laws that would add obstacles to early and absentee voting. Wisconsin Republicans have proposed such laws as well.

Among these are Assembly Bill 173 and Senate Bill 207, which are aimed at restricting private donations to improve the administration of elections. As discussed in a previous Data Wonk column, these bills were triggered by a series of grants to help fund the 2020 election including hiring additional poll workers, purchasing ballot scanning machines and ballot drop boxes, and rental and cleaning expenses for polling places.

The grants came from a nonprofit called the Center for Tech and Civic Life (CTCL) By far, the largest source of the funding of these grants were Facebook founder Mark Zuckerberg and his wife Priscilla Chan.

Wisconsin’s 2020 spring election was a disaster. Photos of long lines at Riverside High School and other Milwaukee polling places got national attention. Aiming to avoid contracting COVID-19, a huge number of voters switched from in-person voting to absentee ballots. For the same reason, many poll workers, often retirees, decided to sit out the election. Personal protective gear, including masks, was in short supply.

There was great concern that the coming November election would repeat the same set of problems, but on a much greater scale. Government funding for the upcoming election seemed well short of what was needed. The CTCL grants aimed at addressing the issue.

The chart below shows the twelve Wisconsin cities that received the largest CTCL grants. Arguably, both in Wisconsin and nationally, large cities had the greatest challenge in conducting safe elections. In Wisconsin, most of the grant money went to the five largest cities—Milwaukee, Green Bay, Madison, Kenosha, and Racine. The requests from these five cities were likely strengthened by their promise to work together and share experiences. The chart below shows the twelve largest grants, according to a survey by the conservative Wisconsin Institute for Law & Liberty (WILL). 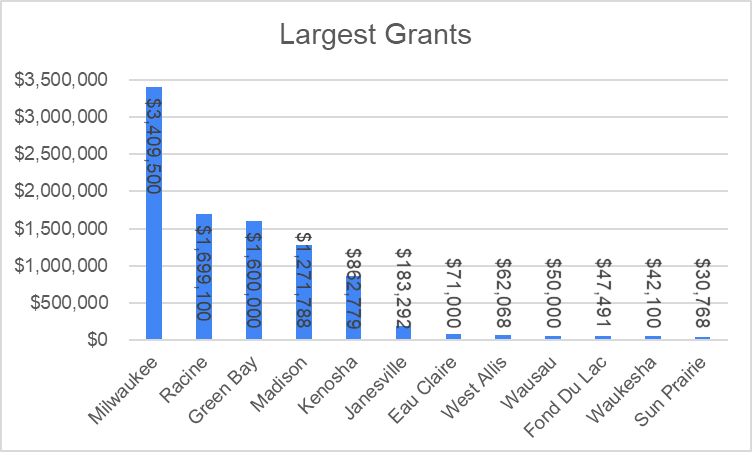 Altogether, about 200 of Wisconsin’s more than 1850 cities, towns, and villages applied for a grant and received at least a promised $5,000.

Most election agencies in Wisconsin did not apply. In Milwaukee County, for example, only West Allis joined Milwaukee in applying for a grant. Presumably, the other cities, towns, and villages believed they had sufficient resources—or perhaps passed for political reasons.

One might expect that the response to the donation from Zuckerberg, Chan, and others, whatever one thinks of Facebook, would be to praise their support of democracy. That’s the spirit of the following quote from APM Reports (affiliated with American Public Media):

The pandemic — and Congress’ neglect — necessitated an unprecedented bailout of election offices with private money funneled through a little-known nonprofit. And the money proved indispensable.

On the right, however, the predominant view seem to be that the CTCL grants were aimed at helping the Biden campaign. As the earlier Data Wonk column described, those claiming a partisan motivation include the Thomas More Society, which had sued Vice President Mike Pence in an attempt to force him to throw the election to Trump, and the MacIver Institute, which argued that the mayors of Wisconsin’s five largest cities violated Wisconsin’s open meetings law by talking with each other.

Recently, WILL has joined the fray in favor of the proposition that the grants were intended to help the Biden candidacy. The title of their paper summarizes this argument: “Finger on the Scale.”

Certainly, the grants helped Wisconsin’s largest cities to offer a safe and easy vote, but did they also help Joe Biden? In 2020 almost everywhere in Wisconsin both candidates got more votes than in 2016. Overall, however, as the next graph shows, Biden got 18% more votes than Hillary Clinton, while Trump got 14.6% more in 2020 than in 2016. The difference was enough for Biden to win.

Of the five largest Wisconsin cities, the result was mixed. Trump’s percentage improvement was better than Biden’s in three cities—Milwaukee, Racine, and Kenosha. In two—Madison and Green Bay—Biden’s percentage increase exceeded Trump’s. Put the total votes from the five cities together and it’s a wash. Biden’s vote increase was 8.4% compared to 8.6% for Trump.

Why then did Biden win the election, improving his margin by 4,500 voters compared to Clinton? The answer lies in the rest of Wisconsin, outside the five cities, where grant amounts, if not zero, were much less. Biden’s vote total went up 21.5%. Trump also got more votes then in 2016—but only by 15.1%. If the aim of the grants was to help Biden win, they failed. 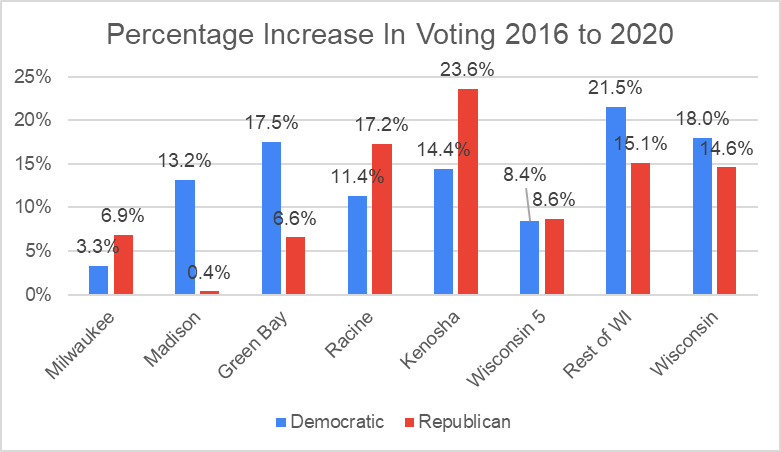 WILL’s report takes a different tack. It includes tables that appear to summarize regression results. The independent variables are the increase in the Trump and Biden vote between 2016 and 2020.

I did not attempt to duplicate it. Too many details of their model are missing from their report. Take their independent variables, for example. Was the increased turnout measured by increased vote total, a percent increase, or something else? It appears for all the 200 cities and towns that received some level of grants they have twelve variables, seven of which are dummy variables that together place a municipality into one of eight categories depending on the amount of its grant. These would seem to overlap another variable called CTCL grant. Without the details on how the research was done, there is no way to determine its accuracy.

The proposal advanced by Republican legislators and WILL would require that any private grant to governments be distributed across the state on a per-capita basis. This could scare away any grant related to election administration, by removing any assurance to the donor of how the grant would be used. Judging from the present Legislature’s willingness to ignore the purpose of federal grants, a donor might reasonably conclude that a grant intended to improve elections would instead be applied to reducing taxes.

That said, it is likely that interest in election grants will greatly diminish in the future. The CTCL grants were a response to an emergency—a dangerous pandemic and the switch by many voters to absentee ballots as a response. Unless there is a resurgence of COVID-19 or some variant, Wisconsin’s elections administrators are likely to muddle through without any private funding.