Bill cuts state aid to cities at same level as any reductions in law enforcement spending.

By Isiah Holmes, Wisconsin Examiner - Jun 10th, 2021 01:33 pm
Get a daily rundown of the top stories on Urban Milwaukee 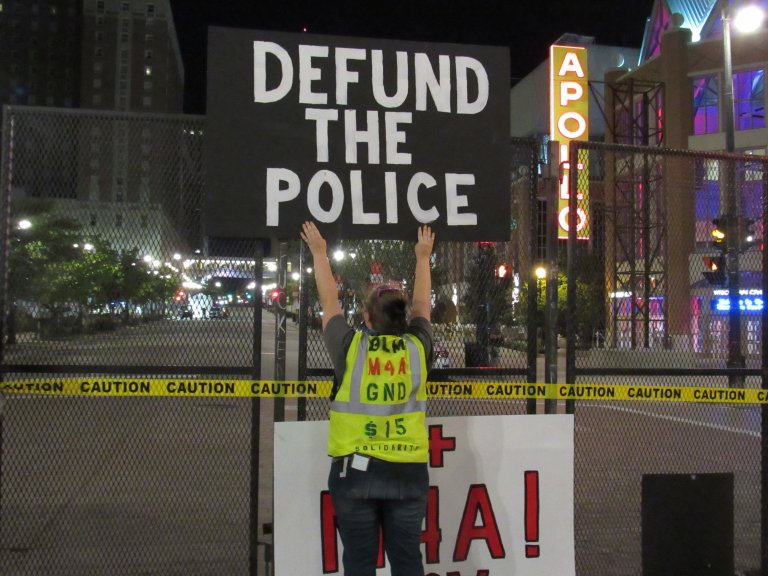 Groups of protesters, from Extinction Rebellion to anti-war groups, join one another in a small demonstration at outside the gates of the Democratic National Convention (DNC) of 2020. They had a variety of signs. (Photo by Isiah Holmes/ Wisconsin Examiner)

“It seems that there’s only one thing that you guys don’t want to defund, and everything else be damned,” said Sen. Chris Larson (D-Milwaukee), during Wednesday’s state Senate floor session. Larson’s remarks were among the first made in response to a Republican-led bill designed to counteract attempts to defund local law enforcement.

Introduced by Sen. Van Wanggaard (R-Racine) and several of his Republican colleagues, the bill would decrease the state’s shared revenue municipal aid payments by the same amount that a local government defunds its law enforcement.

Discussion of the bill (SB-119) made for a tense start to the Senate floor session. Democrats were quick to point out that the bill contradicts seemingly basic Republican “small government” principles. “Our colleagues have talked about the philosophy of local control, about the complexities of funding the police,” said Sen. Janet Bewley (D-Mason). Highlighting that municipalities have been forced to downsize police and other services due to already dwindling budgets, Bewley argued that the bill only further puts certain local communities in the hole.

The bill seems to be reactive to the protest movement of 2020, which continues to call for defunding police and re-allocating law enforcement budgets. Milwaukee County was not the only place where some of the longest consecutive protests have been held over the last year, but it has historically seen its shared revenue decrease year after year. Shared revenue is a pot of money managed by the state to which municipalities contribute a share, and receive a share.

Increasingly, Milwaukee has seen the amount of shared revenue it contributes to other communities rise, while the amount it receives falls. Less shared revenue means tighter budgets, which will eventually lead to cuts in services. In that context, SB-119 looks like another cog in a machine that steadily and systematically drains the city of revenue.

Other Democrats focused on explaining the realities that triggered the protests, and what “defund the police” actually means. Sen. Lena Taylor (D-Milwaukee) pressed that when it comes to police-related policies, “We can be smarter.”

“We can also improve not only the services we provide, but how we fund those services,” Taylor said, adding, “the idea that local municipalities would be prevented from making decisions that are in the best interest of their residents and fiscal responsibility to their constituents is ridiculous.”

Recalling the killing of George Floyd, which was widely viewed online, Taylor added that, “people were disgusted.” She said, “the fact that a member of law enforcement could display such a callous disregard for human life, it shook people to the core. Similar to the civil rights movement, where as a result of TV for the first time, people saw water hoses and dogs being sicced on human beings.” Calls to defund and reallocate funds away from police were birthed from that disgust, and took various forms. “Yes, for some it literally meant that they wanted to scrap the police and start over,” said Taylor. “For others, it meant that they wanted to redistribute funds to services to prevent crime. I know it sounds radical, but it’s been done.”

Johnson pointed to the closure of seven fire stations over an eight-year period. She noted that in Milwaukee the fire closures were “because of our police budget. And because it gets larger and larger and larger.” By contrast, Johnson noted that, “community services gets less than 4% of the budget.”

That disparity resulted in calls to defund the police budget even before 2020. In addition to raw budget numbers, lack of services for mental health crises overburdens police,  courts and jails

“This bill is just such an insult to injury to me,” said Johnson. “Milwaukee gets significantly less in shared revenue in comparison to how much money they give the state, that they’re already being penalized for that,” she added. “And because of the lack of shared revenue payments — that also has a negative impact on police. There’s no money. And the money that is available is disproportionately to police.”

Wanggaard argued that the bill has several exceptions and that municipalities can employ police through federal grant, transfer or merge services with other units, decrease police budgets but retain the same number of personnel. Wanggaard also noted that the bill applies to police, fire and EMS. However, adding to the concerns of Democrats, Wanggaard said that revenue reductions, “will be re-distributed among the municipalities that do not cut their police, fire or EMS.”

Several law enforcement organizations support Wanggaard’s bill, including the Milwaukee Police Association and Wisconsin Chiefs of Police. Public safety, according to Wanggaard, was the original purpose of shared revenue. “I would argue that there are some municipalities where they don’t have that safe neighborhood,” he said. “Because they have, unilaterally, eliminated law enforcement from being on the street.” Wanggaard pointed to fewer police in Milwaukee to explain an increase in homicides in 2020.

Wanggaard blamed Milwaukee for rejecting policies like “Community Oriented-Policing (COP) houses that do exactly what we’re talking about. Putting policemen in the neighborhoods to take those neighborhoods back from the thugs and the drug dealers. Milwaukee chose not to implement that.”

Wanggaard later confessed that, “I’m not up in Milwaukee knocking on doors, I’m down in my area in southeastern Wisconsin knocking on doors that you’ve got some pretty good neighborhoods with officers working on the street.” Nevertheless, he says his constituents want more police and emergency responders to feel safe.

He added that, “By cutting more and more and more officers, it’s going to become an even scarier place. And I love Milwaukee. But I got to tell ya, a lot of people would be very fearful to go down and walk in a lot of really nice neighborhoods in Milwaukee that used to have law enforcement protection. So to say that none of the individuals who live in Milwaukee are trying to get police protection, that is just not true.”

As the discussion went on it only got more venomous. Sen. Tim Carpenter (D-Milwaukee) took a direct charge at Wanggaard saying, “I can’t think of a legislature that’s done more damage to the City of Milwaukee than the senator from the 21st and the Republicans. It’s nice for him to stand up and talk down on Milwaukee County. But everything that senator has done, in my opinion, has hurt the City of Milwaukee.”

Carpenter’s later added, “I am tired of the bashing from the Republicans, the senator from the 21st, who think they know everything about crime and safety but add things that make it more difficult for Milwaukee to operate.” He invited Wanggaard “to come and knock on doors on 5th and National with me, and see what kind of reception. Or if he wants to come have a town hall meeting with me, I’d be glad to.” The bill passed the Senate on a 20-12 vote. It is expected to be vetoed by Gov. Tony Evers.