Relationship between County Executive Crowley and Board Chair Nicholson is the best in decades. 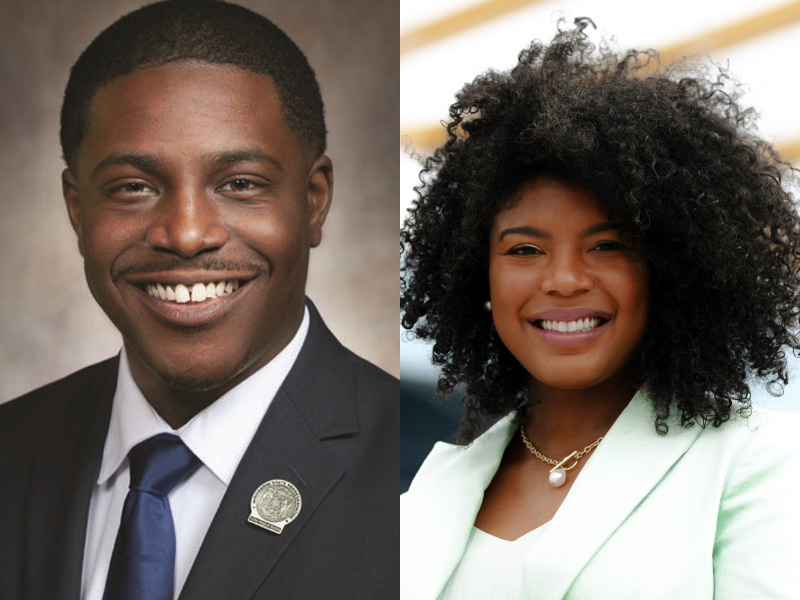 For decades, there has been nasty bickering between the county board and county executive, most recently featuring former Milwaukee County Executive Chris Abele and Board Chair Theo Lipscomb. But both are retired from government and their successors, County Executive David Crowley and Board Chairwoman Marcelia Nicholson, are getting along famously.

“They have a really strong relationship,” says Supervisor Jason Haas, who has served on the board for 10 years. “All is love and prosperity.”

“It’s an entirely new world. I’ve seen Milwaukee County fighting and fighting in the past,” says Sup. Sheldon Wasserman, who has served five years with board, and before that for 14 years as a former state legislator. “This is by far the best relationship I’ve ever seen between an executive and the legislature.”

There is always tension between the executive and legislature, but county government is a special case because its “legislators” pass little general legislation and mostly supervise county departments (hence their title), essentially the same job the county exec does.

For most of the county’s history there was no executive. And after Milwaukee became the first county in Wisconsin to have an executive, a position created in 1960, new county exec John Doyne was famous for his soft touch dealing with board members, many of whom were not happy to lose any power to him. Since then disagreements and bickering have been frequent between the executive and board.

Dave Schulz, a former county parks director who defeated incumbent County Executive William F. O’Donnell in 1988, once referred to his elevation as “a hostile takeover.” Board members were angry at Schulz’s criticism of how they ran county government and his one-term as executive left him often at odds and embattled with board members.

Get a daily rundown of the top stories on Urban Milwaukee
F. Thomas Ament, who succeeded Schulz as county executive, was sometimes called a “dictator” by board members and faced a mutiny of sorts when Board Chair Robert Jackson ran unsuccessfully against Ament in 1996. Scott Walker (county exec from 2002 to 2010) was a Republican dealing with a board of mostly Democrats and there was frequent antagonism between him and most supervisors.

“There was no trust in Walker,” Haas recalls. “One time the board rewrote the entire Walker budget.”

Walker’s successor Chris Abele had a short honeymoon after his election in 2011, with many supervisors thrilled to see Walker gone. But led by Board Chair Marina Dimitrijevic, they were soon calling Abele “Walker light” and furiously resisting his push for fiscal restraint.

“Relations were bad between Abele and Dimitrijevic,” Haas recalls.

They got even worse after Abele did an end run on the board, getting the state Legislature to effectively reduce the board to part-time status, with a part-time salary. Abele followed that up by getting the Legislature to pass another law further reducing the power of board members. Act 14 actually made clear that the job of supervisors is not to oversee the day-to-day operation of county departments, but to pass policies guiding their operation.

But while it may have helped separate the duties of county board and executive, board members were enraged by this. By then Theo Lipscomb had succeeded Dimitrijevic and he was at constant war with Abele.

“From 2016 to 2018 there was overt hostility between Abele and Lipscomb,” Haas recalls. “It was exhausting for us on the board. And for administrators.”

Nicholson, first elected county supervisor in 2016, served as board chair under Lipscomb and saw this war at first hand. It was “distracting,” she says, and made it harder to be productive and get the needed work done.

“It was frustrating,” she says. “One of the reasons I ran for the board chair is I wanted to improve the culture.”

Nicholson and Crowley have been friends since before they served in county government, going back to when Nicholson was a labor organizer. She stayed neutral in the 2020 race for county executive, knowing she wanted to be board chair and have a good relationship with whomever won the race. But Crowley’s victory meant that two good friends could now work together to create a successful relationship.

“This was a deliberate effort by us to build a collaborative relationship,” she says. “We agreed that we might disagree but would do it respectfully.”

In the early going Nicholson says she met with Crowley every two weeks for at least an hour to discuss their vision for county government. Over time they’ve met less than that, but “we text each other, we call each other on the phone,” she says, to stay in touch on any issues.

Crowley, from all accounts, has a good relationship with the entire county board. “You see a lot of collaboration by him,” Nicholson says.

But a key to that is his relationship with the board chair. “We get the feeling from them that we are in this together,” Haas says.

Crowley has championed a mandate to push for racial equity in all policy and funding decisions. And remarkably there has been little or no pushback, even from supervisors representing mostly white districts. “We unanimously approved the racial equity ordinance,” Haas notes.

The new era of good feelings, free from all the bickering of the past, has meant a more productive government, Wasserman believes. “It’s a tremendous benefit for Milwaukee County and its citizens.”