Sheriff says accreditation from National Commission on Correctional Health Care was "years in the making." 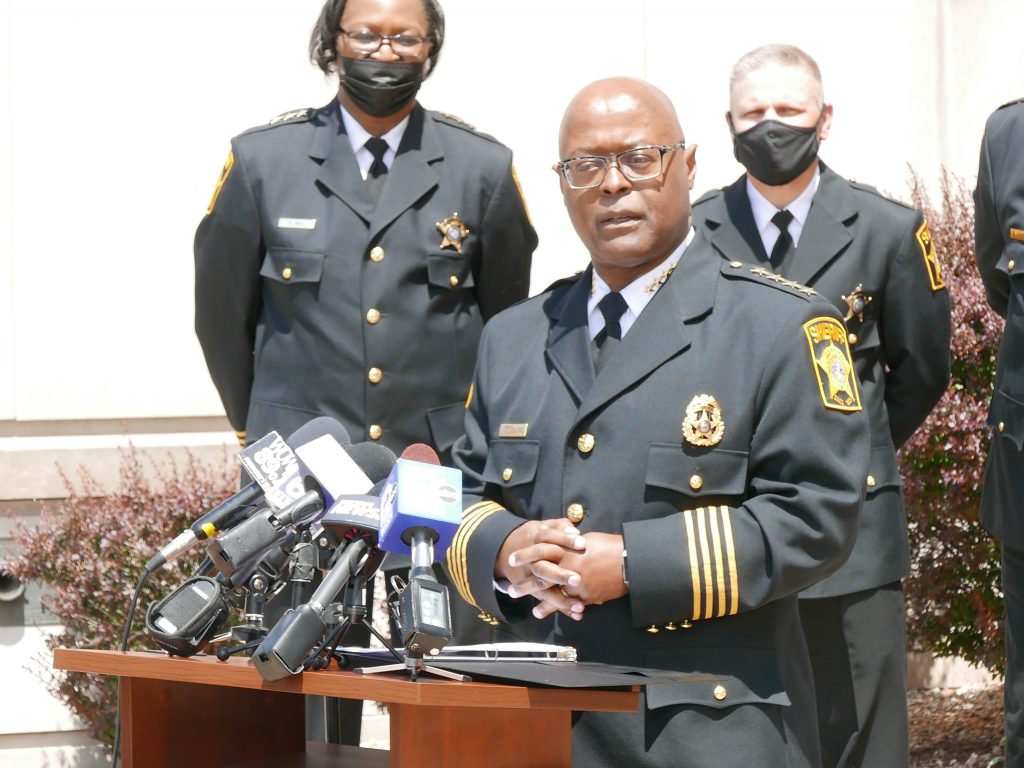 The Milwaukee County Jail has received accreditation from a nationally recognized organization for the standards of medical and mental health care it provides to incarcerated people.

At a press conference Monday, Sheriff Earnell Lucas announced that the jail had achieved accreditation from the National Commission on Correctional Health Care (NCCHC). This means that the jail, Milwaukee County Sheriff’s Office staff, corrections officers and health care workers are “providing a nationally accepted standard of care in health services delivery,” according to the organization.

Health care in the jail is provided by Wellpath, LLC., a private contractor that specializes in corrections health care. Wellpath replaced the previous contractor, Armor Correctional Health Services. Armor faced charges for the dehydration death of Terrill Thomas in the jail in 2016 and for falsifying medical records.

Before accreditation is given, the NCCHC performs an “external peer review” to determine whether the correctional facilities meet the organization’s standards. Once awarded, it lasts for three years, at which time the jail will submit to another comprehensive review of its policies and procedures before it can receive accreditation, said Jail Commander Inspector Aaron Dobson.

The MCSO has contracted with NCCHC’s consulting service, called NRI, which provides “education and training for accreditation,” according to NCCHC. Dobson said NRI consultants work with the jail on a monthly basis and “help with oversight of the mental health and medical program.”

Get a daily rundown of the top stories on Urban Milwaukee
Lucas said the accreditation is an achievement “years in the making,” thanks to the staff at the jail. “Their combined efforts have helped transform our facility from one notorious for its shortcomings to one that we can proudly say meet the highest of national standards for correctional healthcare.”

The dehydration death of Mr. Thomas occurred under former Sheriff David Clarke and, along with criminal charges, resulted in a lawsuit and approximately $7 million settlement paid by the county and Armor to his family.

But the work isn’t done yet, Lucas told Urban Milwaukee. Maintaining and improving care in the jail is a journey, he stressed. The sheriff said his predecessor, acting-Sheriff Richard Schmidt, made one of the “more critical decisions” to move the jail forward, and that was making Dobson commander of the jail.

Jails are a complicated correctional setting. The inmates there are often being moved to other facilities and being brought in and out for trial. Dobson said that before the pandemic, the jail would have 32,000 people coming in and out of the jail during a busy year.

With a large population and a large staff involved in providing the necessary comprehensive medical and mental health care, much of it comes down to having the appropriate policies and procedures in place, Dobson said. As the jail was working to achieve its accreditation, the MCSO hired a Chief Legal and Compliance Officer, Lucas said, to “One, make sure we do the right things, and two, that we do them the right way.”

Over the past year, there have been four deaths in the jail. Three, so far, have been attributed to suicide, the Milwaukee Journal-Sentinel reported. Dobson said when deaths occur in the facility, “You have to do a debrief and talk to all the parties involved and look at things that you can do better and ways you can improve.”

Lucas said that jails are “no different than hospitals and other institutions where people make choices whether it’s to inflict self harm or to do harm to others.”

Lucas said he wants the families of those that have died in the jail to know that “We’re a very caring group of people here in the Milwaukee County Jail, and that any loss of life, anyone being hurt in our facility is really painful to all of us, and that we hope that those incidents are severely reduced if not totally eliminated while we’re here in office.”

Both Lucas and Dobson said that one of the challenges remaining for the jail is the recruitment and retention of correctional officers. The jail has had a problem with retention and understaffing for years, and Lucas and Dobson both say this is because of inadequate compensation.

“We’ve got to find a way to stabilize and keep good people,” Lucas said. The jail lost 80 people in 2020. “So more than a third of my staff has turned over,” Dobson noted.

Dobson said correctional officers need to be paid “for the services and work that they do, like it’s a career type position.” He added that, “the expectations are high and it’s challenging working in this environment and people should be paid appropriately.” Veteran correctional officers are sorely needed, but that requires compensating people well enough to keep them around, he explained.