Rare non-casualty of pandemic has run annually since 2014. 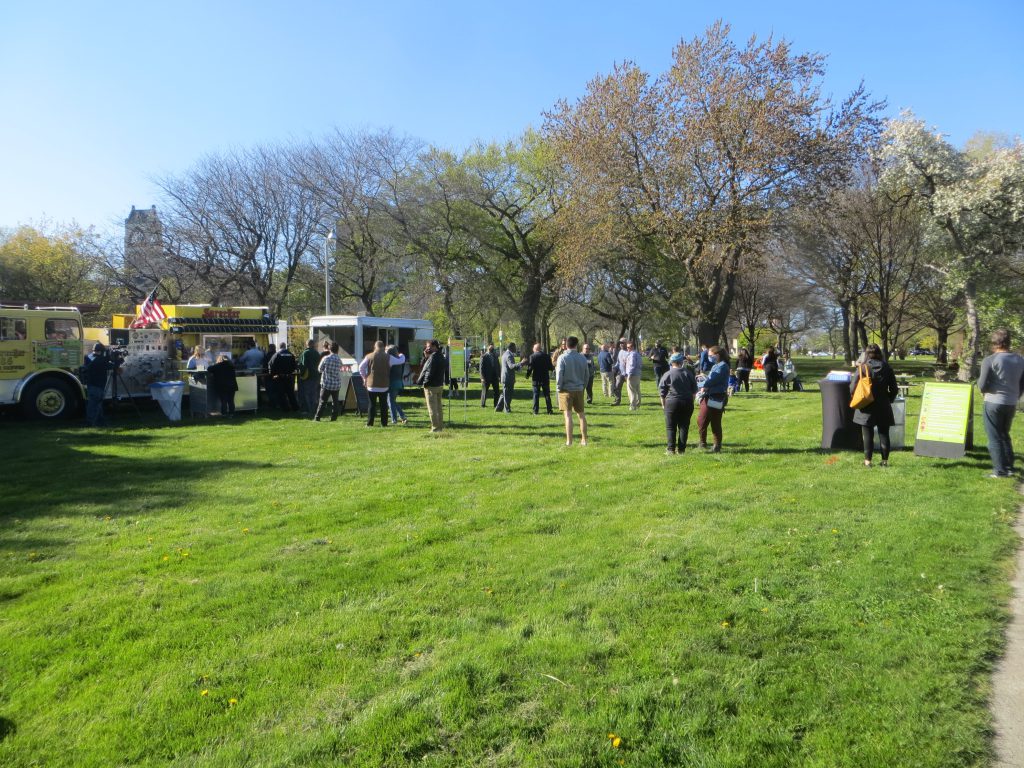 In 2014, the budget-strapped Milwaukee County Parks hoped to generate $100,000 in revenue by operating a Traveling Beer Garden for two-week stints in six locations. The repurposed fire truck, now a bar, exceeded its goals by the third stop, raising $250,000 by the end of the season, about half of which was profit. Sprecher Brewing Company, the sole provider of beverages, contributed an additional $32,000 that year. The tour has continued to expand in popularity and in size. There are now two traveling beer gardens one called the Roll Out The Barrel Tour, the other called the Pass Me a Pint Tour. They were some of the very few annual events (indoor or outdoor) to be held last year.

Wednesday, the traveling beer garden opened its eighth season with a stop by the Roll Out The Barrel Tour at Juneau Park, 900 N. Prospect Ave., and about 100 people gathered around the yellow truck as 5 p.m., the opening time, neared. They took up much more space than 100 people used to, scattered as they were into socially distant units. Since this was an official government event, it was a natural occasion for brief speechmaking by officials. This office is best conducted before the taps are turned on for the sake of the orators as well as the auditors.

“I’m waiting for the County Executive to speak,” the bartender, a parks employee, said, standing guard before twelve tap lines arrayed behind him, just waiting to flow. County Executive David Crowley, dressed in a grey suit, arrived at the appointed time, and took to the podium, which was soon to serve as a bar.

“I’ll keep my remarks brief, because I know you didn’t come here to see me — you came here to have some fun,” he said, correctly reading the crowd. Crowley acknowledged the importance of the traveling beer garden to the county’s balance sheet, which has only worsened since 2014.  “Sprecher has donated over $200,ooo over the past eight years,” Crowley said. This is in addition to the profits of the traveling beer garden, and its three fixed counterparts. A press release from Crowley said “Since the first season, Sprecher Brewing Company has donated over $200,000 in Parks improvements ranging from pavilion renovations to ADA accessible restrooms to energy efficient lighting installation to tree planting and even parking lot resurfacing.”

Crowley finished his speech by reminding the audience that their participation counts in the grand scale of the county’s budget problem, even if it is only a drop in the bucket compared to the firehose torrent of cash required.

“We are looking at a fiscal cliff in six years,” he said, “I am thankful for folks like yourself,” who are helping the county parks one non-reusable pint cup at a time.

Get a daily rundown of the top stories on Urban Milwaukee
County Supervisor Sheldon Wasserman, chairman of the Parks Committee, and represents the 3rd District, which includes Juneau Park. He also expressed his gratitude to the attendees and to Sprecher. Guy Smith, the Executive Director of the parks, welcomed the crowd, and told attendees that “We’re hiring!” Parks positions include serving as staff for the traveling beer garden, he said.

Final remarks came from Sharad Chadha, the President and CEO of Sprecher, whose investment group bought the brewery from founder Randy Sprecher on January 31, 2020. Chadha and his investors, including Andy Nunemaker, who was in attendance, had high hopes for the brand.

He reflected on the past year:

We bought Sprecher last year — last January. What a great sale! Soda sales up — beer coming back. One of the most fruitful partnerships we have had is with the county parks. Others have copied and replicated [the traveling beer garden]. We hope to make Sprecher a national icon and not a Milwaukee icon. … We are hiring as well.”

The Pass Me a Pint Tour will hold its inaugural event at West Milwaukee Park Wednesday, May 19th.

The Traveling Beer Garden operates under a special provision of the Wisconsin State Statutes regulating alcohol beverages. (“Three pages of law and forty pages of exceptions,” the joke goes.) This is why the bartenders are county employees, if only seasonal ones.
According to Section 125.06.6:

Sprecher beers, of some dozen rotating varieties, are available for $5.50 for a 16-ounce tap. Its popular sodas, which greatly exceed the sales volume of its beers, are also available for $3. Five ounces of wine will run you the same as a beer. Klement’s is the purveyor of the sausage products, with Hot Dogs retailing for $4 and bratwursts for $5. These are also sold from the bright yellow truck labeled “Sprecher 85 [the year it was founded] FIRE BREWED Milwaukee.”

Although there was no music at the 2020 beer garden, the opening festivities included a performance by Franklin’s Vern and the Originals polka band, with Vern Tretow playing his vintage Star concertina, manufactured in Chicago, probably in the 1930s. I don’t know where Vern was manufactured, but it was conceivably around the same time, hence the “Originals” in the group’s name. It was great to see a continuation of Milwaukee traditions. Mario Diaz Herrera, co-owner and chef of Triciclo Peru, was on site once again selling Empanadas. 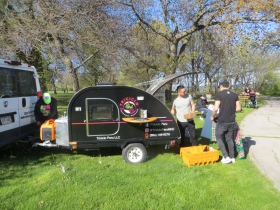 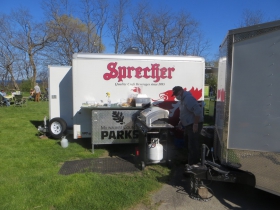 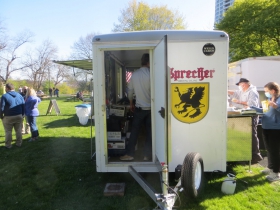 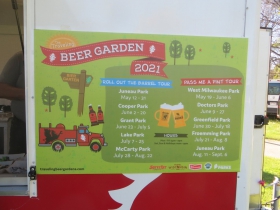 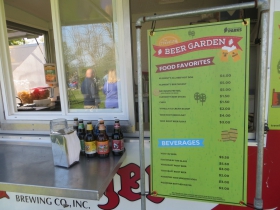 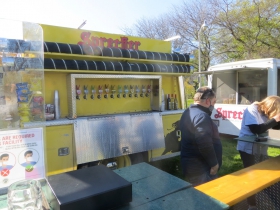