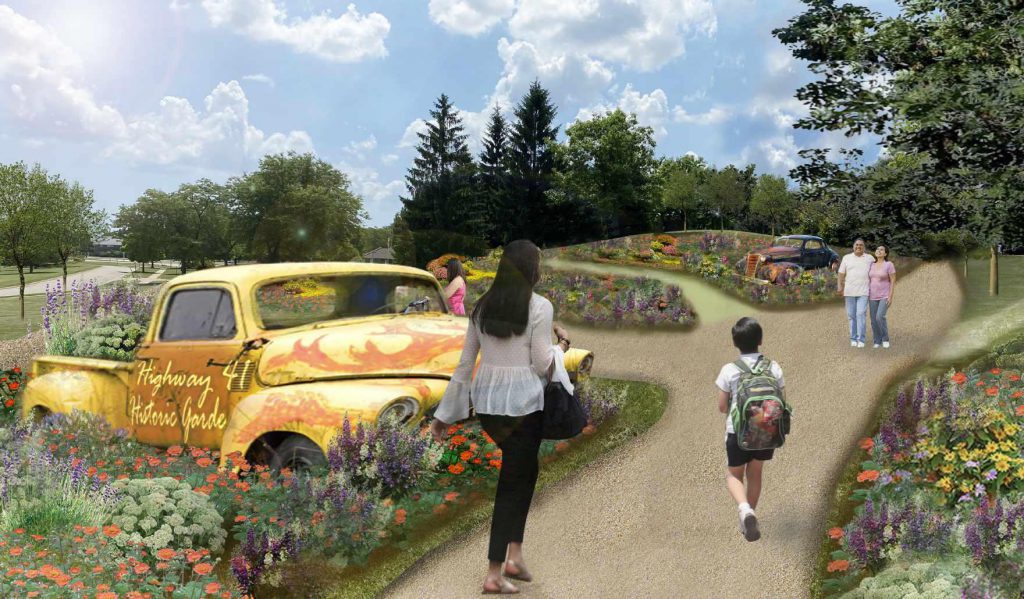 Milwaukee County Parks has reached an agreement with a south-side community organization to build out a “Classic Car Garden” on a little piece of currently unused land in Wilson Park.

The garden, also referred to as the historic Highway 41 Garden, was proposed by the South 27th Street Business District Association in January. The organization is seeking to “generate some activity and experience” in a small piece of the park with a garden that commemorates the history of Highway 41 and the development of the area since the 1950’s, said Tara Cavazos, executive director of the business district.

The site for the garden is just east of S. 27th Street, at the intersection of W. Howard Avenue and W. Van Beck Avenue. It is north of the Wilson Park Senior Center, and it’s empty other than some trees and shrubbery. The land is not part of Wilson Park proper, which maps show ends east of S. 20th Street. But it’s on the same parks land as the senior center and the Wilson Park Recreation Center.

The organization plans to turn this 2.3 acre lot into a garden with paths, plantings, benches, picnic areas and a planted labyrinth. It will use the shells of classic cars and trucks for some of the planters and benches.

The business district will spend $30,000 making these improvements to the site. It will also be responsible for maintaining the site for the duration of the agreement with parks, which is three years with the possibility of three additional three-year renewals.

Supervisor Jason Haas, whose district includes the park, expressed his pleasure at committee that the business district and parks had reached an agreement on the garden, which he said would be “a really attractive feature.” Haas sponsored the resolution approving the deal and advocated for the project from the beginning, urging parks parks to move forward with an agreement.

When the business district originally brought the idea to the board in January, it was seeking a Memorandum of Understanding (MOU) with parks and hoped to start construction in the spring so that it would be ready for the start of summer.

Parks staff told the board that an MOU did not provide the contractual assurances parks would want for a project like this and said they would work to draft a lease agreement and that it would take months to negotiate.

Get a daily rundown of the top stories on Urban Milwaukee
At that meeting Assistant Milwaukee County Corporation Counsel Dave Farwell disagreed, even saying that a lease agreement would grant the business district certain tenants rights that the county may not want to provide for something like an urban garden.

In March, after an environmental assessment of the land had been completed, Parks Director Guy Smith said an agreement was forthcoming.

“It doesn’t really seem like this was much different from what we looked at earlier,” she said. “I’m just curious to see if the parks department is satisfied with the agreement that is in place.”

Smith said the department was satisfied and the committee approved the agreement unanimously.

Update: This story was updated to note that Sup. Jason Haas sponsored the legislation approving the agreement for the garden.