1 million plastic cups a year will be recycled into packaging for SC Johnson products. 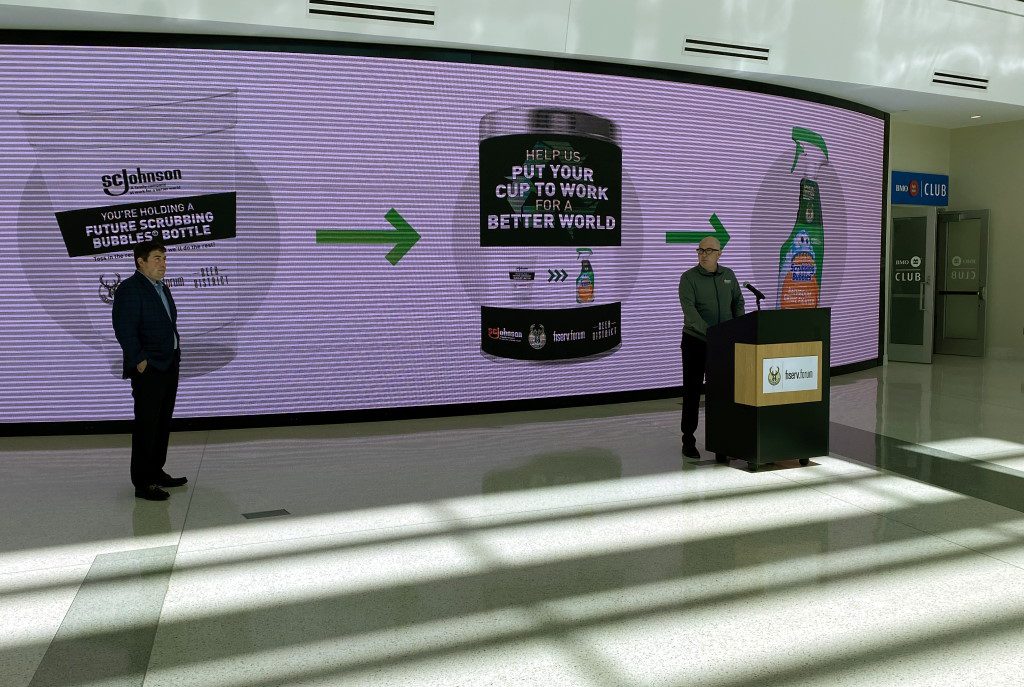 The Milwaukee Bucks are partnering with SC Johnson on an initiative that will recycle plastic cups at Fiserv Forum for use in packaging cleaning supplies produced by Johnson.

SC Johnson, headquartered in Racine, is now the “Official Sustainability Partner of the Bucks.”

At a press conference Wednesday, Alan VanderMolen, chief communications officer for SC Johnson, announced that the company would bring Fiserv Forum and the Deer District into the company’s “plastic recycling closed loop.”

The Bucks will collect more than 1 million plastic cups annually from their arena and entertainment district, which will be used to produce packaging for SC Johnson’s Scrubbing Bubbles product.

VanderMolen told Urban Milwaukee that it takes approximately two cups to make the packaging for Scrubbing Bubbles. So the Bucks partnership will produce half a million bottles annually.

Starting next season, the Bucks will begin exclusively using cups co-branded with Bucks and SC Johnson logos as part of the recycling partnership.

“This partnership with this iconic franchise will be able to shed light on this important issue of plastic waste,” VanderMolen said.

This is not the only plastic recycling initiative SC Johnson is involved in. VanderMolen said the company is already doing the same thing with plastic cups for the Brewers organization. It’s also been collecting ocean-bound plastic, primarily in Asia, and recycling it for packaging. So far, VanderMolen said, the company has taken the equivalent of 500 million pounds of ocean-bound plastic out of the water.

Get a daily rundown of the top stories on Urban Milwaukee
All this recycling is done at a loss to SC Johnson, VanderMolen said. “We don’t think this is a problem for consumers. We think it’s an issue that we need to help educate consumers on and we need to make it easier for consumers to contribute to the solution, through simple plastic cup collection,” he said.

Peter Feigin, president of the Bucks, said the organization is “thrilled” to be working with SC Johnson on plastic recycling and for their help with sustainability and cleanliness at the arena.

SC Johnson has also become the “Official Commercial Cleaning Partner” of the Bucks and will provide cleaning and sanitation products and training for arena staff.  A statement released by the Bucks said this partnership will “ensure the arena remains properly cleaned and disinfected as it welcomes back fans for Bucks games, concerts and other events.”

The Bucks have been holding games at the arena at a reduced capacity because of the COVID-19 pandemic. Following updated guidelines from the City of Milwaukee Health Department, the Bucks and the Brewers will both begin holding games with their venues at 50% capacity.