By Megan Hart, Wisconsin Public Radio - May 11th, 2021 05:19 pm
Get a daily rundown of the top stories on Urban Milwaukee 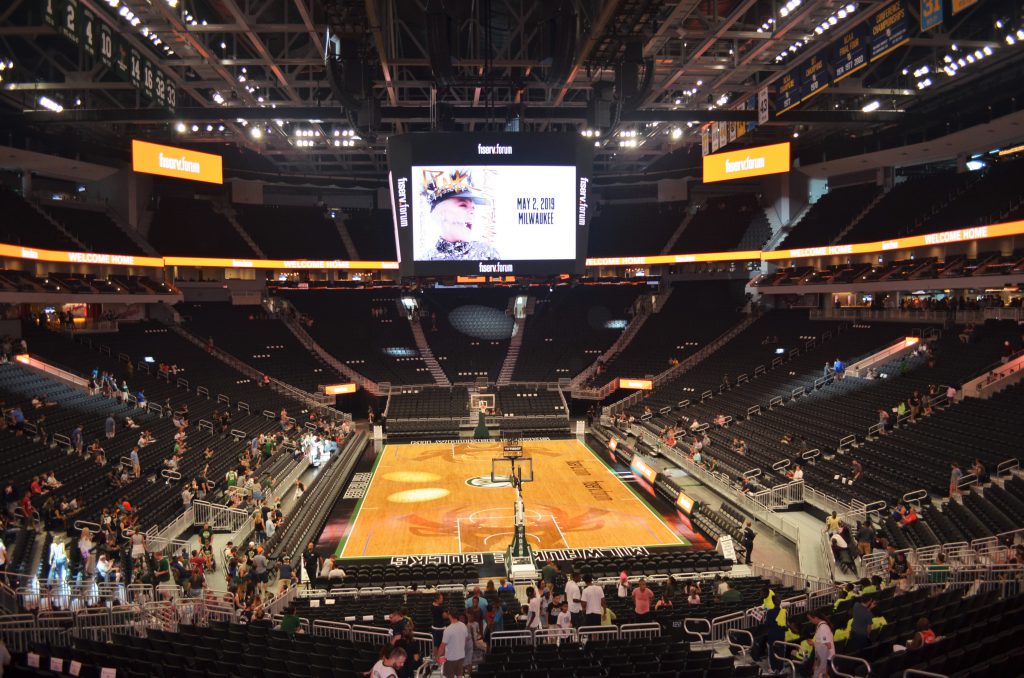 The seating bowl at the Fiserv Forum. File photo by Jack Fennimore.

The Bucks and the Brewers will expand fan capacity to 50 percent based on updated COVID-19 guidelines from the Milwaukee Health Department.

At Fiserv Forum, the Bucks were hosting about 3,300 spectators per game. That number will increase to about 9,000 when the NBA playoffs begin later this month.

“It’s important to stress that health and safety continue to be our priority and wearing masks and following other safety protocols remain mandatory,” said team president Peter Feigin. “Our lives are certainly not back to normal, but this is a positive step forward for the Bucks, the city and our fans.”

The team will continue using pod seating to separate different groups, according to a news release from the Bucks. Playoff tickets go on sale Friday.

With just three games remaining, the Bucks are vying with the Brooklyn Nets for the No. 2 seed in the Eastern Conference. They’ve already clinched at least the third seed, guaranteeing home-court advantage in the first round.

The Bucks recently held a vaccine clinic before a game at Fiserv Forum. More than 35 percent of Milwaukee County residents are fully vaccinated, according to state health officials.

Meanwhile, the Brewers will double their seating capacity starting Saturday against the Atlanta Braves. They’ll be able to welcome about 20,000 fans.

“We look at this as the next step in the journey to get to 100 percent capacity,” said Rick Schlesinger, president of business operations.

It’s a goal he thinks is attainable this season, he said. The Minnesota Twins are now able to sell out Target Field, he noted.

At 50 percent capacity, most fans will no longer be separated by 6 feet, Schlesinger said. For now, the team isn’t planning to create sections for vaccinated fans, though it will offer two sections in the loge for fans who want to remain socially distanced.

Tailgating will continue to be permitted as more fans arrive at the ballpark, he said. The city of Milwaukee allows outdoor gatherings of up to 1,000 people.

Masks will still be required, and there won’t be any food vendors in the stands, he said. But other aspects of the game experience will get closer to normal, including the return of the racing sausages.

“It’s not true Brewers baseball if the sausages are not racing inside the ballpark,” Schlesinger said.

Before welcoming fans this season, both the Bucks and Brewers submitted safety plans to the Milwaukee Health Department.

Milwaukee County is seeing about 120 new cases per day, according to the city’s COVID-19 dashboard. Meanwhile, new cases of COVID-19 are declining across the state.