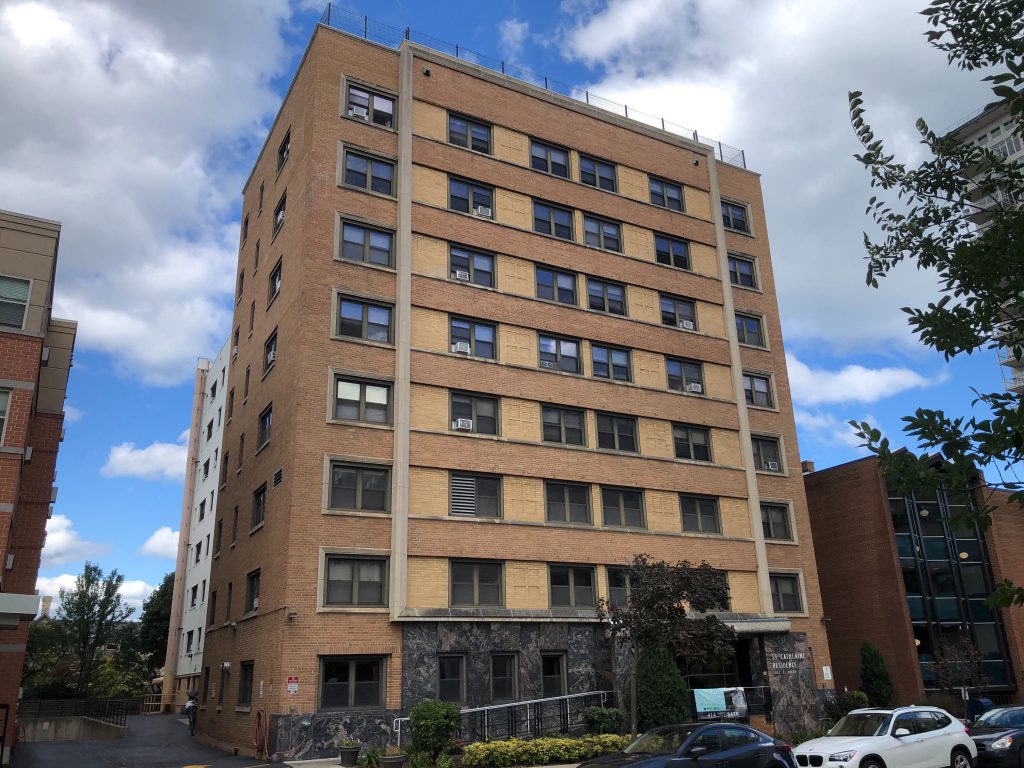 The federal and state government will provide developers with “the carrot” — income tax credits of up to 20% each are awarded to offset costs of doing historically-sensitive redevelopment projects.

The City of Milwaukee Historic Preservation Commission uses “the stick.” Owners of locally-designated historic buildings must receive approval for any exterior modifications, with no incentive beyond a collective interest in maintaining historic integrity.

On Monday, the stick took a swing at a developer trying to grab a carrot.

The commission  — which typically votes in favor of historic designation — unanimously voted to recommend that St. Catherine Residence for Young Women, 1032 E. Knapp St., not be designated a federally historic structure. Missing out on the designation would block the developer’s ability to access tax credits in any redevelopment.

“I don’t think it’s up to the integrity standards we would usually expect,” said commission staffer Tim Askin, detailing how the current owner has repeatedly modified the building. “If we were trying to designate it they would be in here screaming ‘integrity standards’ at us.”

Similar arguments about integrity have been used in the past to block the local designation of other structures, including the Marcus Performing Arts Center, though that was a decision by the Milwaukee Common Council.

Get a daily rundown of the top stories on Urban Milwaukee
Askin said Mercy Housing Lakefront is pursuing historic preservation tax credits as part of an effort to rehabilitate St. Catherine Residence, a supportive housing complex for low-income women. He said he expected the credits to be used with low-income housing tax credits.

Built in 1950 as the Martinique Apartments, with a Modern Movement-style design by architect F.J. Hinton, the eight-story building was acquired by the Catholic Sisters of Mercy in 1966. Mercy Housing is a real-estate-focused offshoot of the organization.

“They did some very light remodeling of the outside, which consisted of adding what looks a porte cochere, but being 1966 is just a front porch,” said Askin.

Had the organization stopped there, Askin might have been more inclined to support the nomination. Instead he went on to detail the numerous changes made to the property.

“They have three sides covered in corrugated siding for no apparent reason,” he said. “[They] replaced 100% of the windows with vinyl.”

“That’s a disqualifier,” said commission chair and area alderman Robert Bauman. Due to redistricting, he didn’t represent the area at the time, but said he remembered one of the houses being in good shape. He expressed displeasure that the house was demolished instead of deconstructed for material reuse.

Askin noted that changes in the setting are a reason not to accept a nomination. “They compromised their own setting,” he said. “If it had been a different owner that had been responsible it would be harder to hold that against them.”

He also noted that the interior, based on the application, had been substantially modified. “The applicant admits there is zero integrity in any of the private rooms,” he said, highlighting a passage from the nomination form.

“As much as I want to support Modernism and women’s history in Milwaukee, I just don’t think it’s up to the right standards,” said Askin.

The commission does not have the final say on state and federal designations, but the application will now go forward without the local recommendation.

Some federal designations are never brought to the local commission for review. The Oriental Theater, where redevelopment is underway by Milwaukee Film, is one such project. “It’s such an obvious application that no one is even worried about,” said Askin.

But the commission still has another decision pending. It held discussion until its next meeting on Irgens‘ nomination of the former M&I Bank Building, 770 N. Water St. Irgens is seeking to redevelop the building into a modern office building after relocating the bank, now part of BMO Harris Bank, to the newly-constructed BMO Tower.