Bill covers corrections facilities, but one sheriff said it would help protest surveillance.

By Isiah Holmes, Wisconsin Examiner - Apr 30th, 2021 02:49 pm
Get a daily rundown of the top stories on Urban Milwaukee 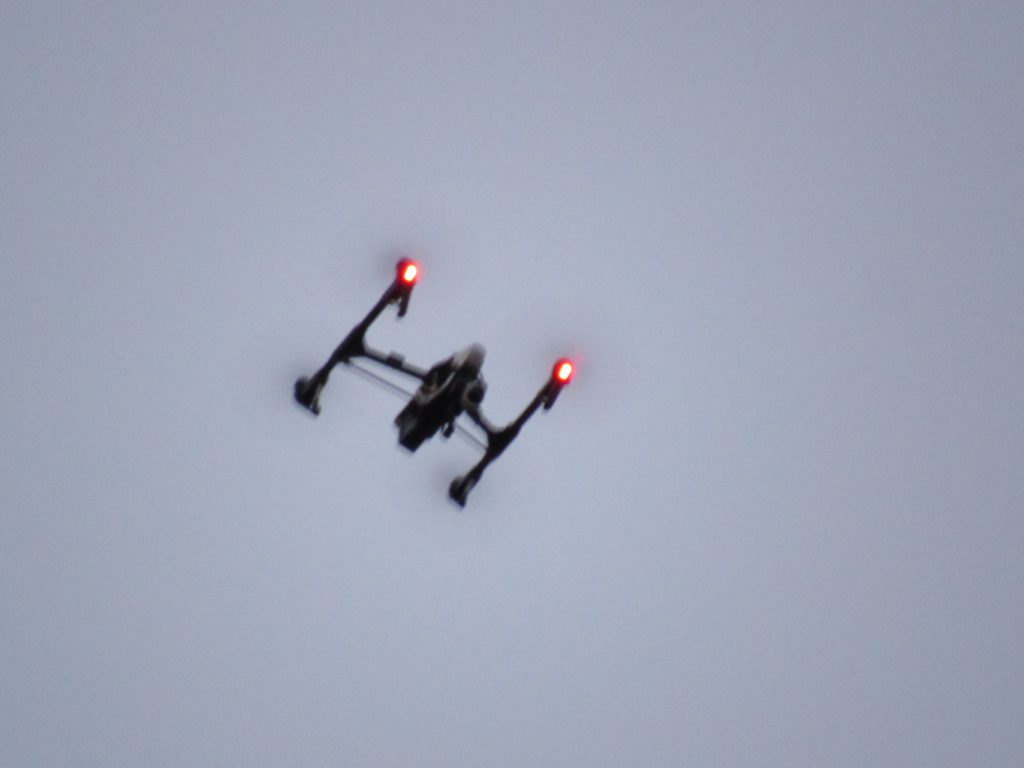 A drone hovered overhead on the first day of demonstrations. Photo by Isiah Holmes/Wisconsin Examiner.

An Assembly Committee on Corrections hearing into a bill that would allow law enforcement to fly drones over Department of Corrections (DOC) facilities offered a look into the future of drone usage in Wisconsin. The bill, AB-211, introduced by Rep. Calvin Callahan (R-Tomahawk) as well as several other state representatives and senators on both sides of the aisle, was designed to end an ongoing prohibition against drone flights over DOC airspace.

“The idea for the proposal was brought to my attention by staff of the Department of Corrections earlier this session and has since received bipartisan support,” Callahan said during the hearing testimony. “ In 2015 Wisconsin Act 318 prohibited a person from operating a drone over a correctional institution or grounds. This included state prisons and county jails.”

“Unfortunately,” he added, “an unintended consequence of this law made it illegal for the Department of Corrections and county sheriffs to operate drones over their own facilities. As many of you are aware, there are some obvious benefits of flying drones around a correctional facility. Including increased security and maintenance abilities.”

Sen. Dan Feyen (R- Fond du Lac) added, “Giving the Department of Corrections the ability to fly drones will allow greater visibility in open-air areas of the facilities. This will increase sight lines and security, and allow eyes and ears in places that might otherwise be inaccessible.” Beyond potential security roles, Feyen pitched drones and their related technologies as more advanced and reliable ways to perform maintenance checks of facilities. “This makes drones a very effective tool that can be used at the department’s disposal,” said Feyen.

AB-211 not only applies to DOC facilities, but also those under the jurisdiction of the county sheriff. Dodge County Sheriff Dale Schmidt also testified, though some of his comments implied the bill could allow for more freedom in drone operations. Schmidt was enthusiastic about the bill and about drones in general, noting that as a child he wanted to become a cop and a pilot. Through his department’s drone program, the sheriff has accomplished both those goals.

Schmidt emphasized the security benefits of flying drones. “Not only for security and maintenance, but in the current times we see ourselves with more individuals protesting outside, illegally protesting outside. And, sometimes, those things need to be monitored and having that aerial footage available is really helpful.”

Later he added, “We have had individuals who have stated that they wanted to come and close down some of the streets, illegally I might add, in front of some of our institutions. And that hasn’t happened, that hasn’t come to fruition yet. But with some of the times that we’re in, we don’t know what’s going to happen. And having that ability to fly a drone above these facilities so we can monitor that, and take appropriate action would certainly be more favorable than putting troops on the ground and monitoring it that way. And certainly, we want to have as hands-off an opportunity as we can. This allows us to do that.”

During the protests of police violence in 2020, drones became a common sight above street demonstrations, especially after Milwaukee, Wauwatosa and Kenosha began enacting curfews and emergency declaration orders to quell marches. Recently, the Milwaukee County Sheriff’s Office (MCSO) also announced the formation of a drone unit. While MCSO personnel promoted the drones’ usefulness for crash investigations, they also noted their intentions to use the drones for protest monitoring — especially for marches that come near highways. MCSO’s drones are also equipped with powerful FLIR cameras to detect body heat.

The committee hearing offered some insights into the state’s technological capabilities, and the potential future of drones in Wisconsin. Chief information officer for the DOC and commercial drone pilot Tommy Ballistrari, who helped found the DOC’s drone and unmanned aircraft system program, answered questions about what could be done to prevent unauthorized drones from entering DOC airspace.

“We’ve spent a lot of time investigating different technology out there to detect drones,” explained Ballistrari. Federal law prohibits tampering with a drone in-flight, meaning that you can’t just shoot it down. Some legislators raised the possibility of using technology that jams signals to down unwanted drones. Ballistari stated that such technologies “do exist to jam signals but it violates both the FAA sabotage law and the FCC Telecommunications Act of 1935, which says that you can’t jam signals. So we have our hands tied a little bit, but we have been looking at drone protection systems.”

After Ballistari’s comments Rep. Michael Schraa (R-Oshkosh), who chairs the committee, warned, “I would also guess that the DOC wants to keep close-chested some of the technology that you’re talking about. We are on Wisconsin Eye and, if there is technology out there I don’t think we want everybody knowing about that technology.” Mention of confidential technology capable of jamming signals is interesting, as many protesters have said they  believe their phone signals have been interrupted or jammed by law enforcement on various occasions.

Alternative and potentially less invasive technologies may also be built into drones themselves. Drones can be programmed to automatically detect and avoid restricted airspace, or law enforcement can employ methods to detect when a drone has entered such airspace, rather than jamming its signal to down it.

Others testified in favor of the drone bill from a private sector point of view. Businesses that specialize in drone technology to help survey properties or buildings for renovations are also limited by current legislation. In the future, if such businesses were to become interested in producing armed drones for military customers,  they would have to move out of Wisconsin. Additionally some drones, such as those purchased by MCSO, are produced by foreign countries that  could have interest in the data they collect. Schraa noted after testimony from Wisconsin drone businesses, “Hopefully that business stays right here paying lots of taxes.”

Then he adjourned the meeting.