How Gerrymandered Are We?

It has been well publicized that both Wisconsin’s state legislative and federal congressional districts were heavily gerrymandered in 2011 by Republicans in the Wisconsin state legislature as part of the nationwide “REDMAP” campaign. But it is not as well-known precisely to what extent they are gerrymandered.

Allow me to help fill that gap.

With the intent of doing precisely this, I used AutoRedistrict (open source software that I developed which creates fair and compact electoral districts) to construct:

Then I simulated 100,000 elections for each of these maps, and measured the disproportionality of each. This allows me to put the amount of disproportionality in the current map on a spectrum. (I’ve put the technical details of how I did this analysis at the end of this article, for those interested.)

Below is a chart of the results, including 50% confidence level bars. In other words, 25% of the simulated elections were below the confidence bar, 25% were above, and the blue dot in the middle is the mean outcome (total of all outcomes, divided by 100,000). The units are in congressional seats. 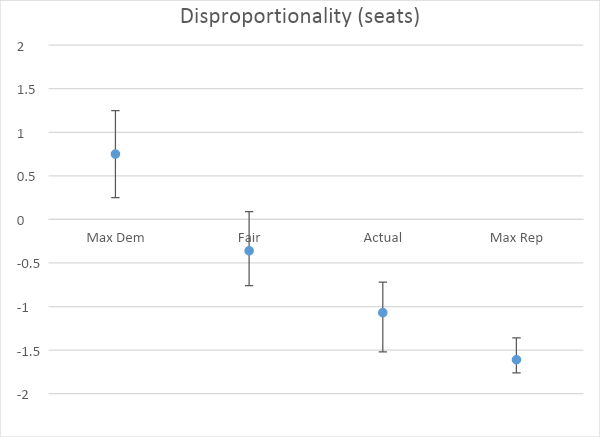 A few interesting things to note:

Overall, by drawing the maps the way they did, Republicans were able to gain, on average, an extra seat in federal congress, making the Wisconsin congressional delegation 5-3 instead of 4-4. Wisconsin has 8 congressional districts, so this means that drawing the map this way is equivalent to giving themselves roughly an extra 1/8th of all votes cast. About 3.2 million votes were cast in Wisconsin, so 1/8th of this comes out to about 400,000 votes. Voting twice in an election is a felony. By this comparison, the gerrymandering that the Republicans in the Wisconsin Legislature did is equivalent to committing about 399,999 felonies. Put conversely, this is equivalent to disenfranchising 400,000 voters — all of them Democrat and no doubt many of them minorities.

Using computer algorithms, they could have pushed that to the limit and disenfranchised another 200,000 voters, gaining on average another half a seat, thus solidifying that 5-3 advantage and on rare occasion (about 5% of the time) even getting it up to the absolute maximum of 6-2. Their efforts managed to get them 2/3rds of the way to gerrymandering Wisconsin to the fullest extent possible, but not all of the way there. Nonetheless, the additional gerrymandering they could have done would not have been likely to net them another seat in any of the 5 elections before the next redistricting cycle.

Bear in mind that as you get to higher amounts of disproportionality, it gets harder and harder to make the map more disproportional. For this reason, on a scale of 1 to 10, I’d give Wisconsin’s gerrymander roughly an eight. If they had used more sophisticated techniques they could have demonstrated a greater disregard for their constituents and the core concept of elections, but they certainly get an A for effort, and the practical impact is about the same as that of the most extreme gerrymander mathematically possible.

The source code for my analysis can be found at: https://github.com/happyjack27/autoredistrict/tree/master/src/new_metrics

I look forward to being able to use these same techniques to analyze proposed maps for the People’s Maps Commission of Wisconsin. I feel this is a valuable method of analyzing the partisan impact of proposed (or existing!) maps. This enables us to deliberately redistrict in a way that makes sure that everyone’s votes are impactful, and helps us get as close as we can to truly representative government.

Kevin Baas developed the AutoRedistrict software program, presented on the topic of gerrymandering at the Harvard 2019 CGA Conference, and has published two papers on the topic.