By Sam Woods, Milwaukee Neighborhood News Service - Apr 28th, 2021 11:41 am
Get a daily rundown of the top stories on Urban Milwaukee 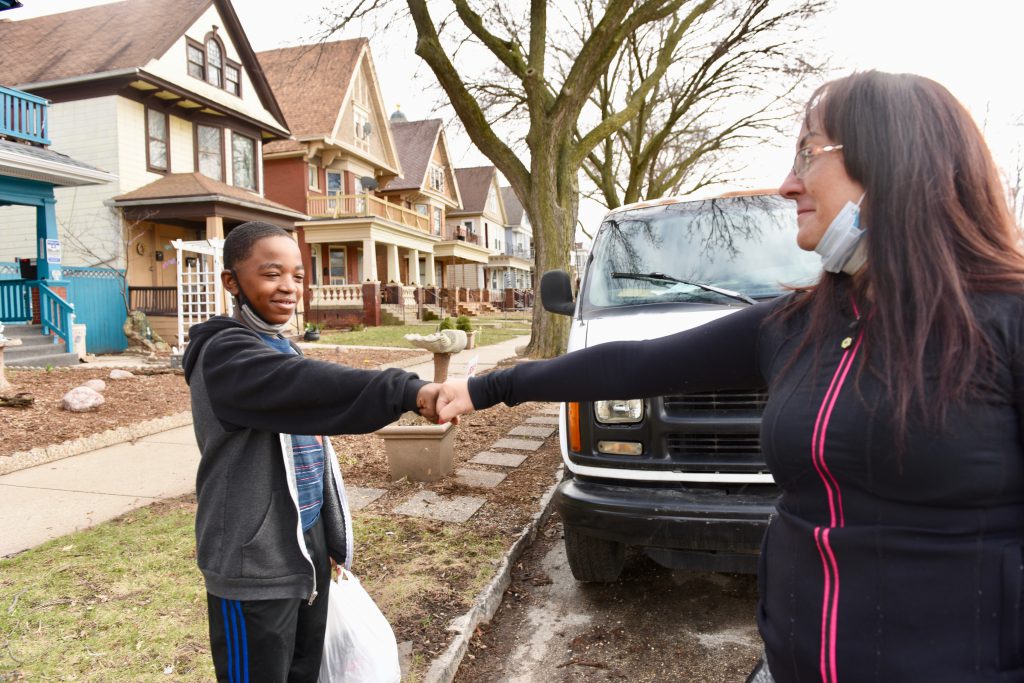 Laura Manriquez, known to her neighbors as “Milwaukee’s Food Fairy,” frequently delivers food from food pantries and stores to those with transportation issues. Here, she fist bumps DelMonte, her Lincoln Village neighbor and mentee. Photo by Sue Vliet/NNS.

When Laura Manriquez was 9 years old, her dad asked her what she wanted to be when she grew up. Her answer? A teacher, a nurse or a nun.

“In some way I’ve done a little bit of all of that,” Manriquez said, laughing.

She’s been a nurse for almost 25 years. She’s helped persuade politicians to offer treatment alternatives instead of incarceration for people suffering from substance abuse. She’s ran unsuccessfully for state Assembly five times. She’s survived COVID-19. And she continues to keep her neighbors — and Texans — fed during the pandemic.

For these efforts, many know her as “Milwaukee’s Food Fairy,” “The Urban Angel of Mercy” or simply “the helpful neighbor that surprises me.” But Manriquez, 55, said she does not do all of this for personal recognition, but rather because someone needs to do it.

“I loved the story about ‘The Little Engine That Could’ as a child,” Manriquez said, referring to the children’s story about positive thinking and hard work, where the main character, a train engine,  repeats to itself “I think I can” to get through difficult situations.

“I still think back to that story even as I’m doing the things I am doing now.”

Manriquez grew up on Washington Avenue between First and Second streets, and for as long as she can remember, her family put an emphasis on making sure the surrounding community had enough to eat. She remembered three little girls who always walked past her house on their way to school and how her mom fed them breakfast every morning.

“I feed people because my mom and dad went out of their way to feed people,” Manriquez said. “My parents were the sweetest, most kind-hearted people you’ll ever meet, and they showed me how to serve others.”

After getting her GED through Journey House in 1985 and moving to Lindsay Heights, Manriquez began attending Hephatha Lutheran Church, located at 1720 W. Locust St. She quickly made it known that anyone in the congregation who was hungry or knew someone who was hungry could come to her.

“On her block, people knew to go to her if their kids were hungry,” Kannass said. “She didn’t have a lot extra then, but she demonstrated a willingness to share.”

After a few years, Manriquez moved back to the South Side, this time to Lincoln Village. Here she continued to serve her immediate neighbors, but she also had her eye on taking on larger advocacy work in Madison.

‘Even if I am not in an elected position, I can still serve’

One of Manriquez’s first policy projects involved advocating for people suffering from substance abuse. Manriquez helped get the Treatment Alternatives and Diversion program passed in the state Legislature in 2005.

She was not alone in this effort, but according to Greg Stewart, who at the time was a legislative aide for then state Rep. Leon Young, Manriquez was instrumental.

“I can’t say strongly enough how helpful she was to getting this legislation passed,” Stewart said. “Some come to Madison for personal notoriety, but Laura really seemed to be here for the right reasons.”

Coming off this victory, Manriquez began to seriously consider running for office. She said state Rep. Scott Suder, a “hardcore Republican” in Manriquez’s words, reached out to say that she was the one who convinced him to support the program.

Considering the partisan gridlock in Madison, Manriquez thought this was a sign to her that the state Legislature would be a good place to take her activism next.

“I thought if I was able to change a hardcore Republican’s mind on treatment over incarceration, then, God willing, if I am elected, I think I can change things for the better,” she said.

She first ran for the Wisconsin Assembly in 2008, challenging then-Rep. Pedro Colón for the 8th District seat. She lost in the primary, garnering about 26% of the vote.

Manriquez would try again four more times, running every two years until calling it quits after losing with about 36% of the vote in the 2016 primary.

But even throughout these losses, Manriquez remembered her mantra: ”I think I can, I think I can.“ This was never more true than during the 2012 campaign, when Manriquez also was mourning the death of her son Gilbert from injuries sustained in a car accident less than three months before Election Day. 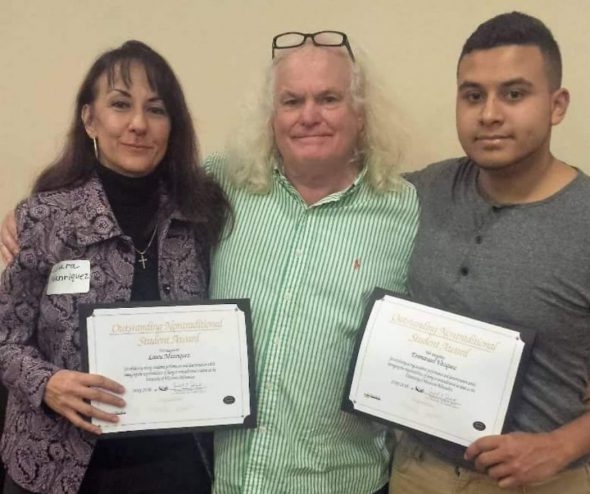 Laura Manriquez (left) receives the “Outstanding Nontraditional Student Award” with her son Emmanuel Vasquez in 2016. In the middle is Jimmy Johnstone, a now retired adviser at UW-Milwaukee. Photo provided by Laura Manriquez/NNS.

After her bid for state Assembly failed in 2016, Manriquez began shifting her focus away from a political career, opting to focus on her nursing practice and on meeting people’s needs as a resident instead of a politician.

“I ran for state Assembly all of those times because I saw the hypocrisy of electeds and people in power putting themselves above those they’re supposed to serve,” she said. “But even if I am not in an elected position, I can still serve.”

‘Food Fairy’ to the rescue

For Manriquez, community service has often centered around making sure her neighbors, especially children, had enough to eat every day. Quita Pole, who lives on Manriquez’s block in Lincoln Village, remembered her hospitality toward her and her children when they moved in 10 years ago.

“I didn’t think there were nice people out there like her who go out of their way to make me and my kids feel welcome,” Pole said. “I never thought I could trust someone to take care of us like that, but she does it every time.”

When the COVID-19 pandemic hit Milwaukee in March 2020, Manriquez stepped up her efforts. She now regularly fills her car with meal packs from the Boys & Girls Club location at 1975 S. 24th St. and delivers them to people like Pole with transportation barriers.

This effort, along with her continuous volunteering at food banks, has earned her the nickname “The Food Fairy.”

“Individuals will call me, text me, inbox me, however they need to reach me with requests. I’m almost always able to get them something, and I take care to make sure they are not embarrassed to ask again,” Manriquez said.

When residents across Texas lost power and access to drinkable water due to power grid unpreparedness for inclement winter weather earlier this year, Manriquez jumped into action and took her show to Texas.

Manriquez loaded up her car with over $1,300 worth of meat, 400 water bottles, 15 gallons of milk and other perishable products like eggs and cheese in five temperature-controlled coolers and drove to her son’s house in Dallas.

“My son lives in Texas, and he was telling me about the situation there, and I was horrified,” she said.

For Manriquez, the decision to make the trip was simple. People needed help, and she was in a position to act.

“It was my same old mantra, ‘I think I can, I think I can,’” Manriquez said. “I wasn’t initially sure how I would do it, but I knew people needed help and I thought I could provide it.”

What’s to come in the future

Currently, Manriquez, who attended MATC, is studying for her bachelor’s degree from UW-Milwaukee. Though she has worked as a nurse for almost 25 years, Manriquez feels it’s important to continue learning even if she does not need it for a job.

“There’s two things people can never take away from you: your faith and your education,” she said. “I’m proud I earned my GED, but I still felt it was time to go back to school.”

On track to graduate in May, Manriquez is majoring in health care administration and minoring in communications and economics with a certificate in informatics. But these are not just passive interests to Manriquez: They represent knowledge she will need for the next chapter in her life.

Manriquez wants to find ways to continue serving her community with the knowledge she has gained.

“Part of me wants to start a nonprofit to really scale what I am already doing,” Manriquez said. “But then part of me wants to just get a regular job and use that income stream to put money toward efforts I know are working. I don’t just want to spend all my time writing grants.”

Manriquez, who caught COVID-19 in October that left her with lingering symptoms, including muscle weakness and brain fog, said she will always remain determined.

“I’m the little engine that could. I am not sure what the future will hold, but I trust in God and my community to guide me to where I am needed most.”