New study shows how mussels have transformed the lake. 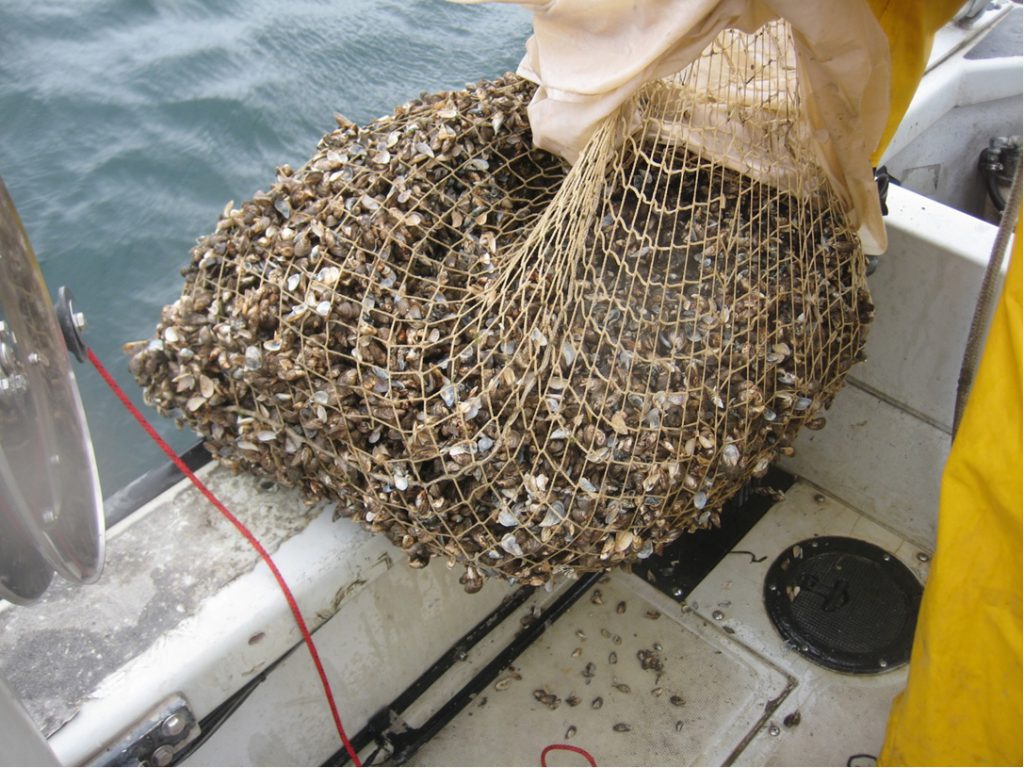 They are natives of the Dneiper River and its drainage area in the Ukraine. They were first detected in the Great Lakes about 30 years ago, having arrived through ballast water discharged by ocean-going ships, perhaps from ships traveling in the St. Lawrence Seaway.

They are an aggressive, invasive species called the quagga mussel, named after an extinct subspecies of African zebra possibly because the stripes fade out towards one side for both creatures.

Quagga mussels have become the scourge of the Great Lakes, succeeding and surpassing the zebra mussel, another invasive hitchhiker on ocean-going vessels, which had became quite dominant in Lake Michigan by the late 1990s. The quagga mussels took over, because they can latch on to any surface, from sand or mud to stone or steel. By contrast, zebra mussels need a hard surface on which to live. Quagga mussels also thrive at greater depths than zebra mussels.

A new study by the federal EPA’s Great Lakes National Program Office (GLNPO) finds that Lake Michigan is still dominated by quagga mussels, at about the same level they had achieved by 2010.

“The density of the quagga mussels has decreased slightly,” says Todd Nettesheim, Deputy Director of the GLNPO, but the average size of the mussels is now bigger.

Get a daily rundown of the top stories on Urban Milwaukee
GLNPO has been monitoring changes in the Great Lakes since 1983 and collects samples at 21 sites in Lake Michigan alone. It annually samples open water conditions across all five Great Lakes using standardized methods.

Its latest study found that 90% of the invertebrate creatures on the lake bottom are quagga mussels, a stunning level of dominance that has decimated the normal lakebed population of worms, insect larvae, crustaceans and other invertebrates. That’s because the quagga mussels filter and feed on so much of the lake’s phytoplankton — a wide variety of microscopic plants — which leaves the invertebrate animals with nothing to eat. And the decline of those highly nutritious little creatures leaves little for the small fish to eat, which reduces their population, leaving less food for bigger fish.

The impact on the Great Lakes has been profound. “This caused a near collapse of the food chain in Lake Huron,” Nettesheim says.

Lake Superior, by contrast, has seen relatively little impact, because its colder waters and low level of calcium (it lacks the limestone and other sources of calcium found in other Great Lakes) makes the hugest of the five lakes less conducive to quagga mussels.

The impact on Lake Michigan has been more like in Lake Huron, though not as bad. It has maintained more of its fish population, says Nettesheim. “Lakes Michigan and Huron have both undergone dramatic changes since the late 1990s, but the conditions in the lakes appear to be stabilizing in recent years,” the report noted.

The rise of these filtering quagga mussels has made the waters of Lake Michigan (mostly) clearer, with less algae in most areas, which is nice for swimmers, but bad for fishing, with the population of many fish declining. It has little impact on the drinking water, as water works in cities like Milwaukee have to clean the lake water either way.

But the long-term impact on fishing could be huge. The total Great Lakes fishing industry is valued at more than $7 billion annually and supports more than 75,000 jobs. And the mussels are a major threat. The population of bottom feeders like whitefish, long popular in areas like Door County, has plummeted because of the mussels.

While another invasive species in the Great Lakes, the round goby, feeds on certain sizes of quagga mussels, it has not really reduced the population much, as Alexander Karatayev, director of the Great Lakes Center at Buffalo State College, told Great Lakes Now.

He offered a grim view of the future. The quagga mussels “will be big players” in the Great Lakes “for probably hundreds of years,” he predicted.