In the United States, the response to the COVID-19 pandemic has often followed political party lines. The latest example is the hostile reaction to proposals to issue certificates that would allow individuals to document that they received the vaccine, once again demonstrating the opposition among many on the right to measures to overcome the pandemic.

A recent analysis of the relationship between the number of states’ COVID-19 cases and deaths and the party affiliation of states’ governors offers more evidence of the influence of partisanship’ on the response to the pandemic. The two graphs shown below are taken from that study, scheduled to be published in the American Journal of Preventive Medicine.

Until June of last year, states led by Democratic governors had more COVID-19 cases per capita than did states led by Republicans. This likely reflects the early impact of COVID-19 on New York and other urban—and largely Democratic—states as travelers carried the virus from overseas.

Around the beginning of June, however, the two lines flip. From then to mid-December in the midst of the third surge, when the analysis stops, states with Republican governors had more daily cases per capita than those with Democratic governors. 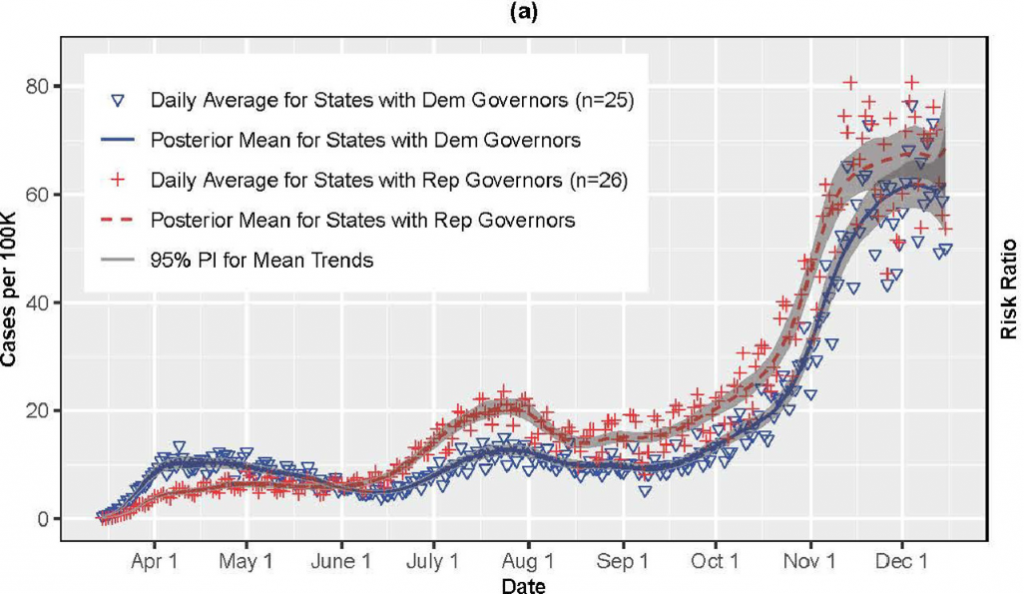 The next chart uses the same set of symbols to plot deaths per thousand residents for states with Democratic and Republican governors. The first surge was especially deadly for residents of Democratic states, likely reflecting early uncertainty about how best to treat patients with COVID-19. Around July 1st, however, the lines flip. From then on, there were more deaths per capita in Republican states. 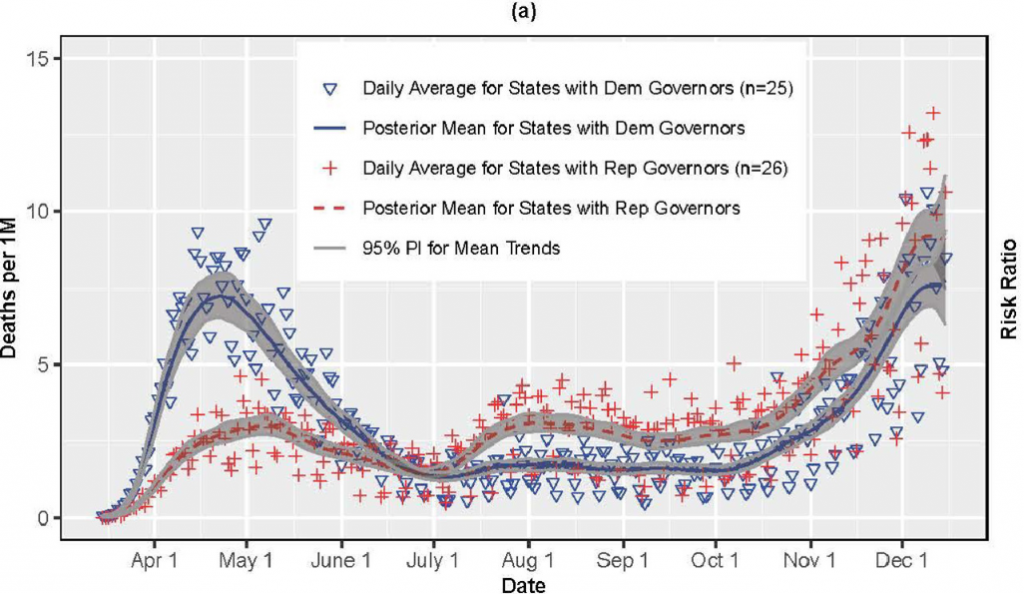 It should be emphasized this relationship does not prove causality. Partly it could reflect the willingness of Republican governors to open their states for business and their reluctance to embrace measures aimed at controlling the disease, such as mask mandates and restrictions on crowds in indoor spaces.

But the difference also is likely to reflect public attitudes toward preventive measures. A population that chose a Republican for governor may have been more likely to listen to former President Donald Trump when he mocked current President Joe Biden for wearing a mask.

Yet despite these differences, both sets of states follow the same overall pattern, with three surges. This suggests that partisanship is not the whole story, that it is very hard for a state to isolate itself from what is going on in its neighbors.

A similar pattern appears when comparing Wisconsin to the nation. The next chart shows the 7-day average of new cases in Wisconsin (the blue line) and the United States (the black line). Notably, Wisconsin’s third surge started earlier than in other states, and peaked earlier. During the runup to that peak, Wisconsin had the third highest cases per capita, exceeded only by the Dakotas.

Will there be a fourth surge? Many epidemiologists suggest there might be, pointing to states that have relaxed or eliminated restrictions. Both in the nation as a whole and in Wisconsin, it appears that cases are inching up. Although lower than at the surge’s peak, the present rate of cases is still considered dangerously high. 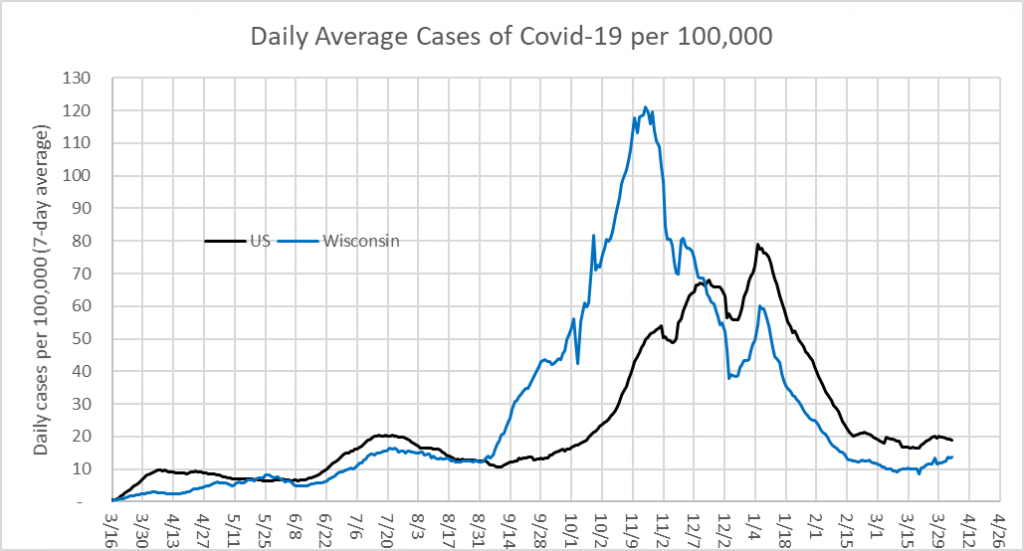 The increasing availability of vaccines suggests that a fourth surge, if it emerges, would be milder than its earlier siblings. This is an optimistic view which assumes that as the virus evolves it remains susceptible to vaccines.

Meantime, the Wisconsin Supreme Court, reverting to its old partisan ways, took away one of the best tools for controlling the pandemic, while awaiting the production of sufficient vaccine to allow the whole population to be vaccinated.

In a footnote, the justices in the majority criticize the dissent for spending “considerable space discussing outcome-focused concerns.” Translated, this means “We don’t care that our decision will lead to increased sickness and death. The footnote continues: “our role is not to rule in favor of outcomes we like; it is to interpret and apply the law, whether we like it or not.”

Writing for the three dissenters, Ann Walsh Bradley does indeed criticize the majority for placing “yet another roadblock to an effective governmental response to COVID-19, further jeopardizing the health and lives of the people of Wisconsin.” She goes on to outline several legal arguments against the court’s action, such as the weakness of the plaintiff’s case for standing.

Ever since Evers was elected governor, and even before he was sworn in, the dominant faction in the Legislature has been intent on stripping him of his powers. Once again, by refusing to work with Evers, the Legislature hurts Wisconsinites.

This hostility extends to his Evers’ appointees, notably to Andrea Palm, Ever’s nominated but never confirmed health secretary, as described by Urban Milwaukee’s Bruce Murphy. This bad blood has attracted the attention of two Washington Post reporters, published under the subtitle: “Andrea Palm, tapped as No. 2 at HHS, has been vilified by Wisconsin Republicans. But her state’s approach to covid-19 vaccination is working.”

Right now, the number of vaccinated people is limited by the availability of vaccine. But even when vaccine supply satisfies vaccine demand, public opinion polls suggest that there is a core, mostly on the right, who are adamantly opposed to getting vaccinated. Once again, partisan rancor raises its ugly head.

This creates a dilemma for opening the economy. How can we safely bring back air travel, concerts and sporting events, church services, or jobs that require working in close spaces if a substantial number of the people involved may carry the virus or be susceptible to catching it?

One proposal is to create an app that would document that a person is vaccinated, sometimes called a “Covid passport.” This would be used to screen passengers on a plane or audience members. This would also serve as an incentive for the holdouts to get vaccinated.

Needless to say, this proposal has generated strong pushback from some on the right, becoming the latest battlefield in the culture wars.