Paul Mathis had COVID-19 in October, but still hasn't completely lost his symptoms.

By Rob Mentzer, Wisconsin Center for Investigative Journalism - Mar 26th, 2021 11:16 am
Get a daily rundown of the top stories on Urban Milwaukee 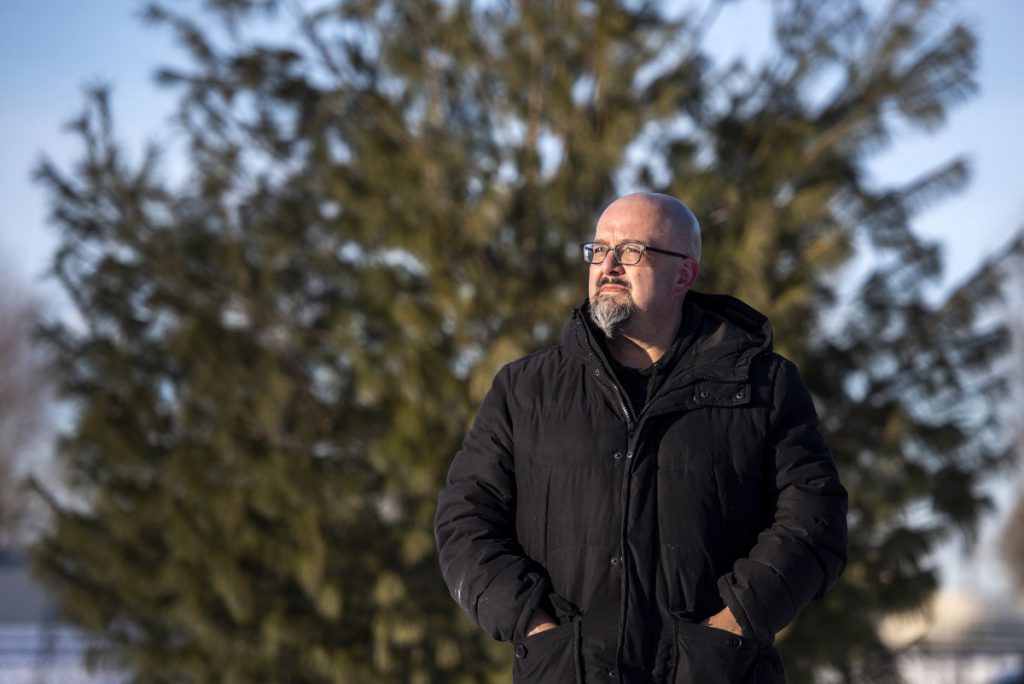 Rib Mountain resident Paul Mathis experiences lingering effects from COVID-19, despite the fact that his case was a minor one. Photo by Angela Major/WPR.

In October, Paul Mathis got COVID-19. He lost his senses of taste and smell, and he slept a lot. But overall, his case was mild. He and his wife, who was also sick, hunkered down in their Rib Mountain, Wisconsin home. His 17-year-old daughter stayed in their older daughter’s apartment for a week, and she avoided the virus.

Mathis’ fatigue, fever and congestion eased within a couple of weeks. But he didn’t really get better. He has “long haul” COVID-19, meaning that some of his symptoms have persisted for months.

Symptoms will linger for 10% to 33% of COVID-19 patients, epidemiologists estimate. For Mathis, that means shortness of breath, a sudden, racing heart rate and a weaker sense of smell. The causes and long-term consequences of long-haul COVID-19 remain a medical mystery. What is clear: The months of suffering in this limbo can prove frustrating and demoralizing.

“Even though I’d heard the phrase ‘long-hauler,’ ” Mathis said, “a part of me assumed it was for people who had had (the disease) pretty heavily — the ones who required hospitalization.” 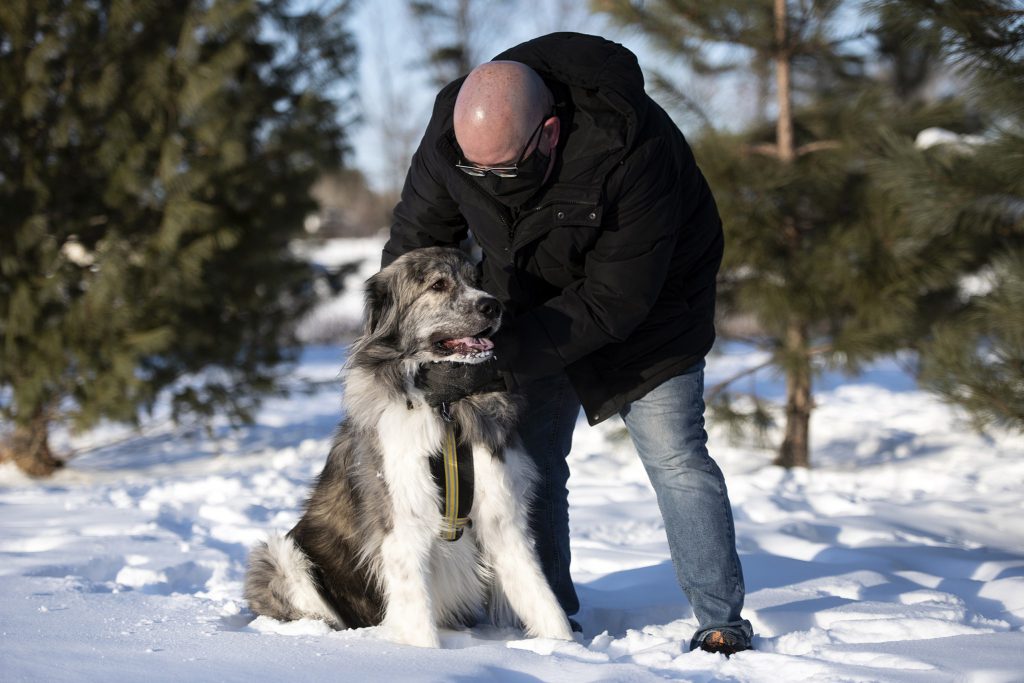 Paul Mathis pets his dog, Tiberius, at the dog park, on Feb. 16, 2021, in Wausau, Wis. Mathis is a “long-hauler,” someone whose COVID-19 symptoms have lasted for months. Photo by Angela Major/WPR.

New research suggests that the opposite is true in many cases. In a study of more than 1,400 patients in California, nearly one-third started out with no symptoms at all.

Mathis, 49, began chronicling his curious experience on social media on Oct. 18. That’s when he shared that his sense of smell vanished and that he had taken a COVID-19 test. Two days later, he confirmed his infection with a one-word post: “Shit.”

He has updated his followers on his condition ever since. It’s become a kind of ritual. He tracks his symptoms. He vents his frustration with short-sighted political leaders. He entreats his followers to wear masks.

For WPR and Wisconsin Watch’s Outbreak Wisconsin project, he read many of his posts to a reporter.

“My senses of taste and smell are still jacked,” Mathis wrote on Nov. 15. “I have this weird, clinical clean scent that is slightly sweet and metallic.” (The scent isn’t traditionally unpleasant, he said in an interview, “but I’ve come to resent it.”)

On Nov. 22, he noted that he finally tasted some raw red onions on a burger. By early January, he thought some taste was returning, but he still couldn’t smell garlic being sauteed. 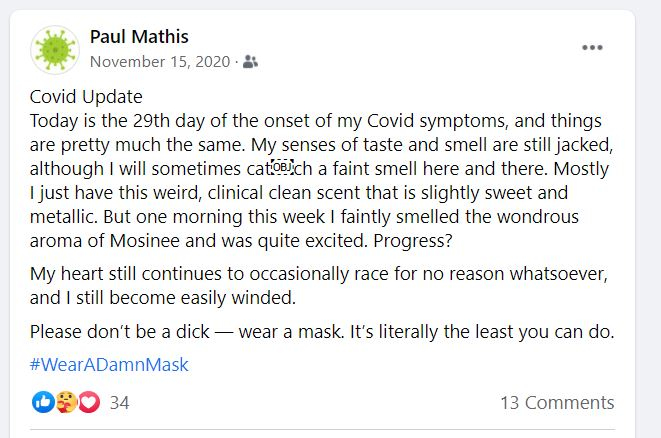 Paul Mathis of Rib Mountain, Wis. began chronicling his experience with COVID-19 on social media after he was diagnosed on Oct. 18, 2020. Mathis’ symptoms have lingered for months, including shortness of breath, a sudden racing heart rate and a weaker sense of smell. 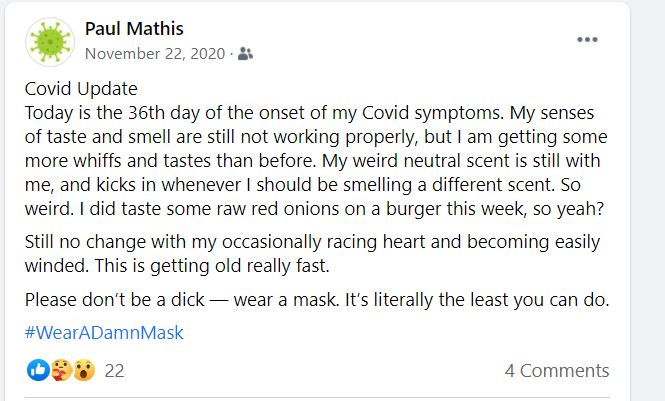 Paul Mathis of Rib Mountain, Wis. began chronicling his experience with COVID-19 on social media after he was diagnosed on Oct. 18, 2020. Mathis’ symptoms have lingered for months, including shortness of breath, a sudden racing heart rate and a weaker sense of smell.

“Still get horribly out of breath doing little to nothing,” he wrote on Jan. 4. “Coming to the realization that this may be the new normal.”

“This hits me,” Mathis said after reading a selection of the posts. “A lot of the stuff I talked about on Day 1, Day 8, Day 15, I’m still experiencing. … You just wonder: Is this a permanent thing?”

He has connected with other long-haulers, participating in online discussions in which folks share symptoms and feelings. Knowing that his COVID-19 journey has proved smoother than others’ leaves him with mixed emotions.

The coronavirus, which causes COVID-19, behaves in unusual ways, working its way into the lungs and blood. Scientists are still discovering how the novel virus attacks its hosts. Some long-haulers experience brain fog — difficulty focusing and holding thoughts. Others have sleep problems, bleeding gums or gastrointestinal issues.

Mathis has been spared most of those symptoms. His shortness of breath and tachycardia — the tendency for his heart rate to race suddenly and without warning — are the most troubling. Even a short walk leaves Mathis winded, forcing him to dramatically scale back on physical activity.

On Day 36, Mathis wrote that his long-haul conditions were “getting old really fast.” By early March, on Day 141, he was celebrating his parents’ vaccinations and regretting that his breathlessness prevented him from participating in his choral group, which was planning a 2021 season.

He tries to focus on the positives, he said, but he can’t help but wonder: “Is this going to be the way it is? Did it take days, weeks, months, years off of whatever lifespan I had? Who knows? I think that’s the biggest question mark and anxiety around it, for people who are still experiencing symptoms. Where am I going to be in a year?”

Wisconsin Watch (wisconsinwatch.org) collaborates with WPR, PBS Wisconsin, other news media and the University of Wisconsin-Madison School of Journalism and Mass Communication. All works created, published, posted or disseminated by Wisconsin Watch do not necessarily reflect the views or opinions of UW-Madison or any of its affiliates.