Gobel Is Powerful in ‘Neat’ 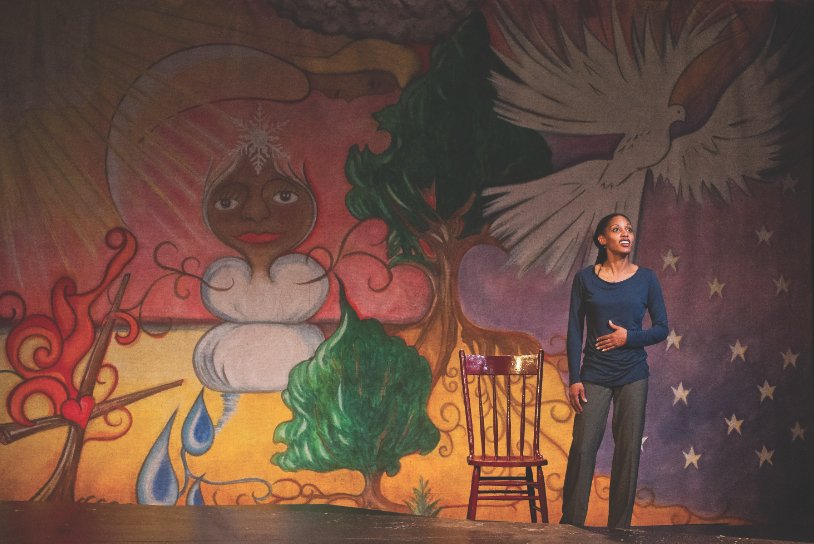 Humor is laced through the dramatic events in Neat, being revived online almost exactly as done onstage in 2012 (same set by Lisa Schlenker, similar sound cues, same solo performer) when it was a one-actress show for Renaissance Theaterworks.

That was an occasion that many theatergoers missed. Renaissance in recent years has gained attention as a first-rate Milwaukee theater organization that will move next season into the Next Act Theatre building at 255 S. Water St.

The 90 minute play has been handsomely transported online through April 11 (to sign up, go to info@r-t-w.com) and it is an engaging way to experience the story of Beneathea “Neat” Harris, the brain-damaged aunt of playwright (and actress) Charlayne Woodard. Neat travels through life from the white man’s hospital that refused to treat her accidental poisoning as an infant to the way she scampered in the dirt even as an adult playing with the family’s children, through her unexplainable (to her at least) pregnancy and to what can only be interpreted as her spiritual departure from the world she was too innocent to understand.

Along the way we get to know the young version of Charlayne, playing in the mud and rain, fixated as so many adolescents are on her hair styles, dabbling with black power to the anger of her father, and dabbling with sex to the admiration of her school chums – and maybe saved from the worst experimentation because of the example of Neat.

The set design has an echo of Southern folk art. The slatted red kitchen chair that is the sole prop is almost another player as it becomes a jail or the place where the actress shifts among several characters. There is nothing Zoom-like about the presentation, more an attempt to suggest we are watching the video of an actual stage production, though everything is designed for the computer screen.

Director Susan Fete realizes she is archiving a robust performance of many voices, movements and ages by Marti Gobel, an actress whose command of the one-person format is already well known to Milwaukee audiences – and now can be seen anywhere in the world, as she well deserves.

What’s also neat about Neat is that it is not the heavy emotional going associated in this time frame with stories about growing up Black. The thoughtful stuff is there, but Gobel and the author go out of their way to communicate the joys, confusion and adult-imposed traumas of growing up, without harping on the tragic echoes.

Only occasionally do we notice how the camera has made choices for us and how the world of the stage, and the world of online, are not always in perfect synchronization. Gobel’s vocal and physical fluidity as she shifts character voices and postures are less an exercise in acting prowess than a grasp of the story’s interiors – not great writing so much as great movement within the landscape she has created.

Director Fete lands a meaningful punch or pose with each blackout. The ending may seem sudden and abrupt, but it also signifies how there is no way for this memory play and the character of Neat to be tied into a neat bow.